Ted was born Jan. 23, 1939, to Edward Irving Bates and Elinor Van Scoten Bates. Ted is preceded in death by his parents and his brothers, Walter Irving Bates and John Dodd Bates (Louise). Ted is survived by his wife, Beth Smith Bates; his son, Warren Bates (Jeri Lynn), and his daughters, Karen Rosene (David) and Jill Smedley (Wade); and seven grandchildren.

Ted was born in Meadville, Pennsylvania, and attended Mercersburg Academy and Yale University. After a career with IBM, Ted and Beth purchased Red Jacket Travel of Grand Island in 1975; they later retired and moved to Florida in 2005.

Ted was a 30-year member of the Rotary Club of Grand Island where he earned the Outstanding Leadership Award, the Service Above Self Award, and was named a Paul Harris Fellow, one of Rotary’s most significant honors. Ted was a past-commodore of the Buffalo Launch Club and served on several boards and committees on Grand Island. He was instrumental in the start of Community Happenings and the American Cancer Society Relay For Life of Grand Island. In 2005, Ted was named Grand Island’s Citizen of the Year.

In lieu of flowers, donations may be made in Ted’s memory to the Rotary Club of Grand Island, or to the Legacy Hospice House of Ocala. 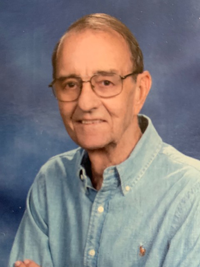