The Zonta Club of Grand Island has selected three outstanding women to receive the 2020 Yellow Rose award for leadership and service to the community.

The club honors women whose talent, dedication, determination and caring hearts have made a difference in the lives of others and inspire a new generation to achieve to their greatest potential.

The 2020 recipients are Barbara Chapin, Jennifer Menter and Christy Zippier.

March 8 was designated as Yellow Rose Day by Zonta International in 1999 to celebrate women’s achievements through the beauty of a single yellow rose. Zonta is an international organization of professional women who work to empower women through service and advocacy. Now in its 62nd year the Grand Island Zonta Club has awarded $25,000 in scholarships to Grand Island women and students, provided financial assistance to many charitable organizations and is committed to the fight against domestic violence. The club’s biggest fundraiser, the Spring Fashion Show and Luncheon, will take place on April 26 at the Buffalo Launch Club. 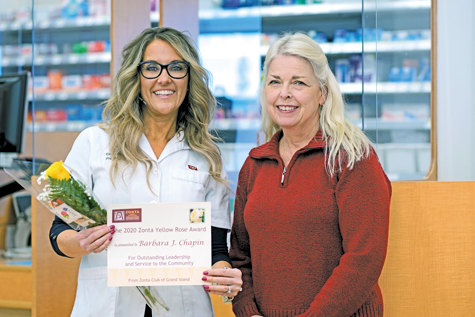 Barbara Chapin has been at the Walgreens Pharmacy on Grand Island for 10 years. Barbara has worked as a staff pharmacist for several years, beginning at Eckerd, prior to it becoming Walgreens. Barbara was promoted to pharmacy manager in 2009.

Barbara enjoys giving back to her community by promoting health and wellness with her patients and spending time at the Golden Age Center for blood pressure checks and immunizations.

A patient of Barbara’s shared the following information regarding the integrity and professionalism demonstrated. “Trigeminal neurologia is a challenging condition. Barb’s kindness, caring and understanding has helped enormously. Barb has taken extra time ordering my prescriptions as well as extra time with me when I felt hopeless. She is a true blessing and appreciated beyond words.”

Jennifer Menter is surrounded by family, co-workers and friends as she receives her Yellow Rose. (Photo by Larry Austin)

Jennifer Menter has been involved with the Golden Age Center on Grand Island for five and one half years. She was promoted to recreation supervisor in 2017. Jennifer has spent most of her career working in recreation, starting in the Town of Tonawanda Youth, Parks and Recreation Department, specifically the aquatic division.

Jennifer has been a swim coach and teacher as well as a teacher of French at St. Andrew’s Country Day School. During her eight years at St. Andrews, Jennifer was involved in service clubs and Mission Maria, providing opportunities to teach students in grades 5-8 how to give back to the community.

Jennifer worked for special events and fundraising with Hospice Buffalo before coming to the Town of Grand Island.

Jennifer is a graduate of both the University of Buffalo as well as Canisius College.

During her time at the Golden Age Center, Jennifer has introduced and revamped many exciting programs including University Express, Fun with French, Walking and Hiking Club to name a few. She has also established partnerships with local leaders, the Grand Island Central School District, Erie County Senior Services and the Alzheimer’s Association.

Jennifer is most humbled and honored to receive this award and I her words…. “I’m just doing my job of trying to take care of our seniors!”

“My goal is to take care of our senior citizens inside and out, in mind, body and soul!” 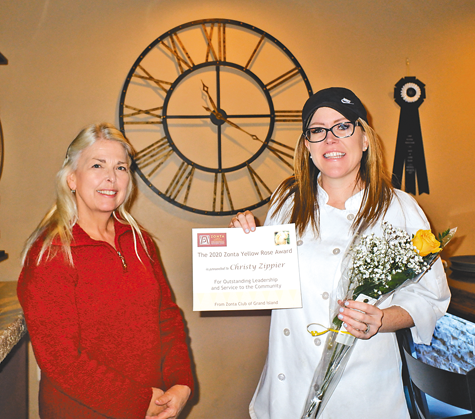 When the old Pepper Mill Restaurant went up for sale in 2017, Christy Zippier knew she had to have it! Christy and her husband, Jason, purchased the restaurant in August 2017 and with the help of many friends and family, began the renovation process.

On Jan. 31, 2018, 773 North Kitchen and Bar opened its doors. Christy’s goal was to open a restaurant in her community where everyone felt comfortable and welcome while enjoying good food.

Christy started working at a very young age with her parents at their Sunoco gas station on Love Road. From there, she worked at the former HSBC Bank and quickly realized that a desk job was not for her. She longed to pursue her passion for food! Christy has always enjoyed cooking meals for her family and decided to enroll in the Culinary Arts program at Niagara County Community College. She completed her associate’s degree and even competed on the American Culinary Federation’s Junior Culinary Team.

After college, Christy was hired at the Conference Center in Niagara Falls as the concessions manager on Old Falls Street. Christy eventually worked into the sous chef and then executive chef. She created menus and executed food service for events ranging from meetings to weddings and galas for over 1,000 guests.

As a college student, Christy waitressed at the Peppermill Restaurant. In 2017, her lifelong dream of owning that very same restaurant became a reality.