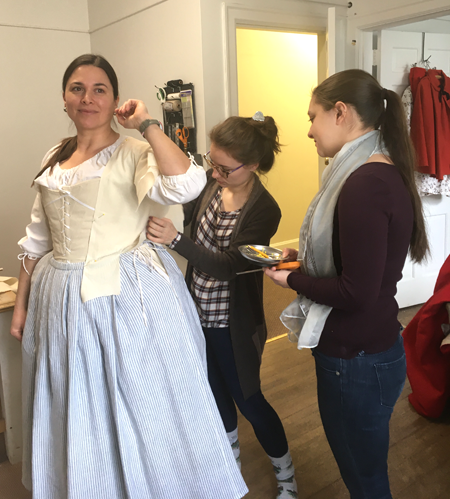 Fort dressmakers Suzannah Emerson and Hanae Weber are fitting Charlotte Clark, left, Old Fort Niagara's public relations manager, for a dress. Clark will portray Madame Contrecoeur, wife of Fort Niagara's commandant in New France in 1752, at "Women of Distinction" at the Officers' Club. Three other women from the fort's history will also be featured.

Old Fort Niagara will mark Women’s History Month with a brand-new program and special access to its sewing studio from 2-3:30 p.m. Saturday, March 21, for “Fort Niagara’s Women of Distinction.” The program will feature four women from the fort’s past, each representing different time periods, ethnicities and socioeconomic backgrounds, and wearing period-specific clothing currently being sewn in the fort’s sewing studio.

Fort interpreters will portray these women while their histories are narrated by fort researchers. Afterward, a tour of the studio will allow guests to see where all of the fort’s historic clothing is made.

“Think of this as an 18th-century fashion show,” said Robert Emerson, executive director of the Old Fort Niagara Association. “Most people are familiar with seeing soldiers in their Kings 8th Regiment red coats marching around Old Fort Niagara. Not this time! This program is about women and their material culture – clothing and accessories – which is being designed and sewn in our sewing studio right now.”

The program will feature Madame Contrecoeur, wife of Fort Niagara's commandant in New France in 1752; Isbella Graham, a British surgeon's wife from the 1760s; Molly Brant, an influential Mohawk woman, in 1777; and Betsy Doyle, an American heroine, from the War of 1812.

“There were not many women at the fort during the 1700s and early 1800s because armies severely limited the number of common soldiers’ wives who could accompany their husbands. It was also a grueling experience to travel to this frontier land,” Emerson said. “However, our research has revealed that there were some influential women who graced these grounds and they have stories to share, which we look forward to doing later this month.”

Refreshments will follow the presentation and attendees will be able to go behind the scenes to tour Old Fort Niagara’s sewing studio, where historically accurate clothing is made by skilled fort staff. Guests will also meet the dress designers and sewers and can ask questions about their processes.

The program will be held in the ballroom at the Fort Niagara Officers’ Club, located at 2 Scott Ave., in Fort Niagara State Park, Youngstown.

More information about membership and Old Fort Niagara’s upcoming events and programs is available at www.oldfortniagara.org. 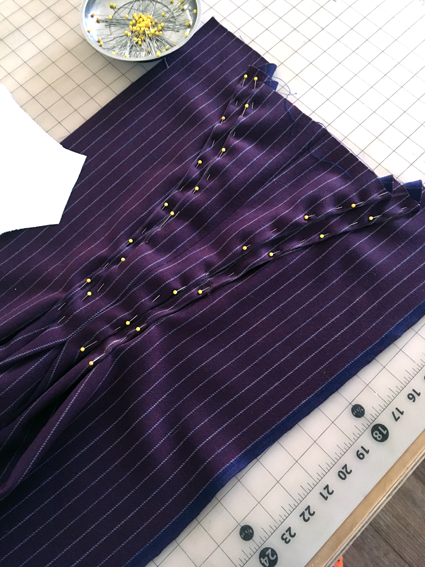 This is the back piece of a worsted-wool dress – a work in progress – to be worn by staff interpreter Kelly Hoyt, who will portray Isbella Graham, a British surgeon’s wife from the 1760s, at “Fort Niagara’s Women of Distinction” event.