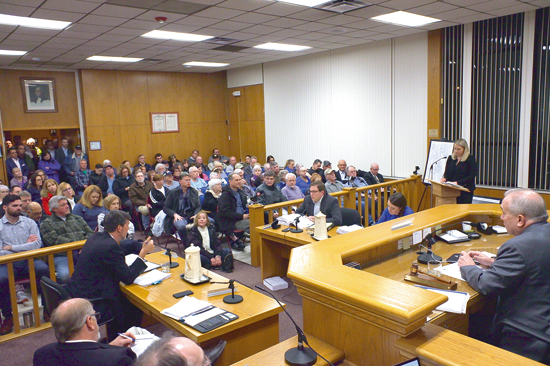 An overflow crowd listens during the first presentation to the Grand Island Town Board Monday regarding a proposed warehouse/distribution center, widely assumed to be for e-commerce giant Amazon. (Photo by Larry Austin)

Grand Islanders received their official first word on a rumored commercial project for the north end of the Island that is unprecedented in size in town history.

TC Buffalo, developers for Project Olive, a warehouse/distribution center project eyed for Long Road, briefed the Grand Island Town Board during a work session in Town Hall Monday. The presentation revealed a planned development district at 2780 Long Road for a new project rumored to be for online retailer Amazon.

The center would be built on undeveloped property west of the Thruway off Long Road with driveways on Long and Bedell roads.

The center could employ 1,000 people working in two shifts in a five-story building encompassing 3,783,124 square feet on a footprint of 823,522 square feet. The square footage would put the warehouse among the largest in America.

An overflow crowd at Town Hall heard the project would have:

•1,855 parking spaces, plus truck loading docks. To put that into perspective, the Fantasy Island parking lot has an estimated 600 parking spaces.

Developers were tight-lipped about the tenant. Kim Nason, Phillips Lytle attorney, spoke at the meeting Project Olive for TC Buffalo and said, “As of right now we are not able to disclose anything with respect to prospective future tenants at the facility.”

Councilman Mike Madigan, responded, “So you can’t actually use the word ‘Amazon,’ is what you’re saying?”

The board announced a hearing to receive comments from the public scheduled for 7 p.m. Wednesday, April 8, at the Grand Viking Theater of Grand Island High School, 1100 Ransom Road.

Nason noted that background information for the project is posted on the town’s website and is likewise massive. The PDF of the documents come in three volumes: Vol. 1 is 222 pages, Vol. 2 is 1,122 pages, and Vol. 3 is 858 pages.

Nason said the warehouse/distribution center is a permitted use on the site already and “ideally situated” for such a development. The developers are seeking a rezoning to a planned development district, which Nason said is a process that is meant to allow for flexibility within the zoning code. “And we submit that is what is exactly needed here,” she said for what she called e-commerce, “a unique and evolving” industry needing modern storage capacity, available utilities and convenient access to the I-190. Parking under the present town code would require over 4,000 spaces, which Nason said would be “absolutely not necessary” for the facility. She said the site would “ never be more than 1,800 people max,” so the PDD approach would provide greater design flexibility.

The project has its supporters. As Nason pointed out, the project fits with the town’s comprehensive master plan for the parcel, which is zoned for light industry.

“As for the presentation, I thought it was pretty much as vanilla as one would expect,” said Grand Island Chamber of Commerce President Eric Fiebelkorn. He said he ended up watching the live feed of the meeting on his phone from the downstairs lobby of Town Hall because of the crowd.

“I’m definitely for the project,” Fiebelkorn said, “but I believe there is a good amount of work that needs to be done to improve the plan (traffic mainly).”

A traffic study included in the project paperwork on the town’s website said the project is anticipated “to generate 658 entering and 29 exiting vehicles during AM peak hour, and 582 entering and 592 exiting during PM peak hour.”

The crowd listened politely for most of the presentation, but when Nason said “there are no anticipated adverse impacts to the roadways,” people in the audience openly and loudly laughed at her.

According to the traffic study:

The project is anticipated to reach full buildout in approximately two years.

“Six of the studied intersections operate at ... acceptable operating conditions,” the traffic study said. “The remaining two studied intersections require improvements. The project is expected to add traffic both entering and exiting the southbound ramp of I-190 as well as through traffic on Long Road. As a result, the (Traffic Impact Study) recommends adding a traffic signal at this intersection. The project is also expected to increase traffic volumes at the northbound ramp of I-190 and Grand Island Boulevard. As a result, the TIS recommends a right turn lane exiting the off-ramp at this intersection.”

“The TIS concludes that the existing roadway network can accommodated the project with implementation of the following recommendations:

1. All truck traffic will travel to and from the New York State Thruway via Long Road and I-190.

2. Install a fully actuated three-color traffic signal at the southbound ramp of I-190 and Long Road.

“Overall, the project will have impacts on traffic. However with the implementation of appropriate mitigation accessories identified herein, the project will not have any significant adverse impact on transportation or the surrounding roadway network.” 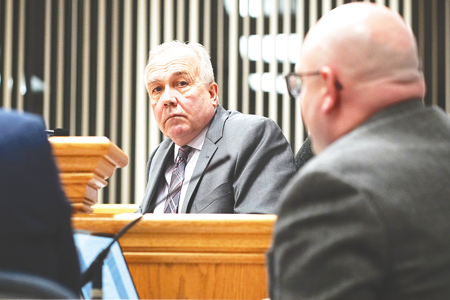 Town Supervisor John Whitney listens to attorney for the town Chuck Malcomb during the meeting. (Photo by Larry Austin)