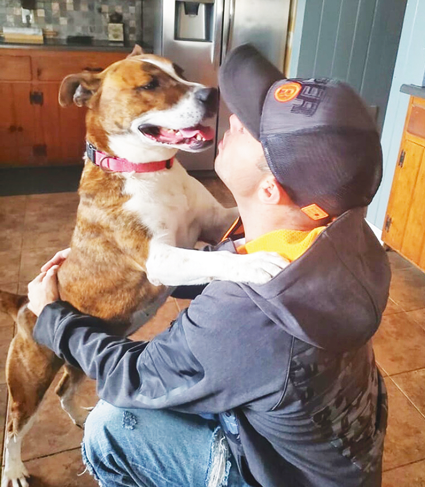 Mardi Paws is a party fundraiser that will be held from 5:30-8:30 p.m. Tuesday, Feb. 25, at the Sheraton in Niagara Falls to benefit the homeless animals in Niagara SPCA’s care.

This year is especially meaningful, as Ray Kinz of Ransomville will be honored with the first-ever “Bonita Award” for his selfless adoption of Bonita, a 5-year-old pit bull mix who was at the shelter for close to 500 days.

They are shown together at left.

Bonita was passed by each and every day until Kinz came into the shelter and asked which dog had been there the longest. Kinz was then introduced to Bonita and it was love at first sight.

The SPCA said Bonita’s reaction to finding out she was going home for the first time was nothing short of amazing.

A video of Bonita leaping for joy as staff members cheered her on as she left the shelter went viral. Kinz’s act of kindness was featured nationally on FOX News, “The View” and “Good Morning America,” to name a few. He has done countless interviews to share Bonita’s story and the importance of adoption.

“I am honored to receive the award, but really it goes to Bonita,” Kinz said. “She patiently waited for me for 500 days and is an amazing dog. I had no idea when I adopted her so much attention would be created. But I’m extremely happy that it did, and millions of people saw just how amazing it is to give an older dog a chance. They see how happy both of us are, and hopefully it encourages people to adopt the older pups.

“The Niagara SPCA took care of her for so long and did an outstanding job. It has been pure joy helping them spread the word about older dogs available for adoption. Bonita has thousands of fans around the world and we will both continue to help the shelter in any way we can.”

Mardi Paws will feature cocktails, Cajun food, basket raffles, a wine ring toss, music from DJ and Honorary Chairman Pat Proctor, a photo booth and more. Channel 4 WIVB reporter Gabrielle Mediak will emcee. Tickets are $45 presale, $50 at the door and $350 for a table of eight. Tickets can be purchased at 2100 Lockport Road, Niagara Falls, online at www.NiagaraSPCAMardiPaws.eventbrite.com or on the Niagara SPCA Facebook page by clicking on events (https://facebook.com/events/s/mardi-paws/769677010217984/?ti=icl).