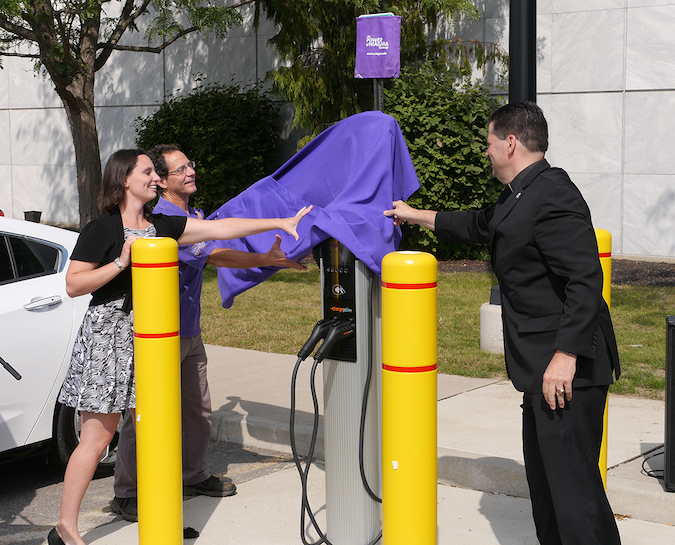 Niagara University's offers electric vehicle charging stations in front of the Castellani art Museum. They were unveiled in 2017 by Katelyn Ruszkowski, a graduate student and member of the NU Goes Green club; Dr. Mark Gallo, professor of biology and co-chair of the sustainability committee; and the Rev. James J. Maher, C.M., president of NU.

Gov. Andrew M. Cuomo recently announced the New York State Department of Public Service issued a report recommending the establishment of a statewide utility-supported "make-ready" program to promote responsible electric vehicle charging station deployment. In addition, the governor announced more than 20,000 rebates have been approved for New Yorkers to purchase electric cars under the Drive Clean Rebate initiative, which provides residents with a rebate of up to $2,000 for the purchase or lease of a new electric car from participating dealers.

In his 2020 State of the State address Cuomo underscored New York's commitment to further encourage electric vehicle, or EV, ownership. Specifically, the governor directed the Department of Public Service, in consultation with stakeholders, to propose a make-ready initiative that provides utility support to accelerate the development of the EV charging infrastructure needed to meet the expected EV growth in the next five years.

The report recommends the Public Service Commission direct the state's major electric utilities to build the grid infrastructure needed to enable installation of publicly accessible EV charging stations. To support EV deployment in New York, the report recommends a number of actions to leverage the utilities' expertise and unique position to promote zero-emission vehicle adoption. The PSC has already approved initiatives to encourage the zero emission's market, including residential time-of-use rates for EV charging and annual per-plug incentives to buy down the cost of installing publicly accessible direct current fast charger stations. The PSC has also approved a number of EV demonstration and pilot projects, and the utilities have developed the framework needed to rollout EVs.

The "make-ready" program would run through 2025 to coincide with New York's goal of deploying 850,000 zero-emission vehicles by the end of that year. The program will improve EV economics for developers by covering up to 90% of the costs to make-ready a site for EV charging. The report also proposes the utilities be required to incorporate EV charging scenarios into their annual capital planning processes to encourage thoughtful siting of charging infrastructure. This proposal will encourage accelerated, forward-thinking development of charging infrastructure that is estimated to provide New Yorkers with over $2.6 billion in net benefits and supports the achievement of the State's transportation electrification and clean energy goals.

A press release explained, “Thoughtful siting of charging infrastructure will support reduced installation costs, improved site host acceptance and maximized use from drivers. An EV charging infrastructure forecast would require electric utilities to identify locations suitable for electric vehicle supply equipment and infrastructure siting, and to proactively educate developers on synergistic cost-saving opportunities. The report recommends that the utilities establish a common suitability criterion to identify potential public charging sites, with the objective of maximizing public charging utilization to ensure efficient use of customer funds invested and provide fair and equitable access and benefit to all utility customers, including those in disadvantaged communities.

“As EV prices come down and more EVs come to the market, it will be appropriate to develop more charging infrastructure in environmental justice communities – who have been disproportionately impacted by air pollution – and rural neighborhoods. Additionally, communities with low vehicle ownership rates, which are disproportionately impacted by air pollutants due to their proximity to heavily trafficked roads and highways, will benefit from a greater share of EVs on the roads.

“New York state has a number of initiatives to support medium and heavy-duty vehicle electrification underway, including bus fleets, which provide additional access to EVs and improved air quality for many disadvantaged communities.

Fast-charger EV stations developed in the first year of the "make-ready" program are expected to have positive financial returns for all regions and site configurations, except for the larger 150 kW stations located in upstate New York. Given publicly visible and accessible infrastructure's vital role in assuaging range anxiety, the report recommends each region in upstate New York be eligible for additional incentives to make four or more fast charging locations available in every region.

The additional infrastructure will complement the goals of the state's Drive Clean Rebate initiative, a $70 million plug-in hybrid and electric car rebate and outreach initiative to encourage the growth of clean and non-polluting car use in New York, promote the reduction of carbon emissions in the transportation sector and help reduce vehicle prices for consumers. Of this, $55 million is dedicated to rebates of up to $2,000 for the purchase of a new plug-in hybrid electric car, all-electric car or hydrogen fuel cell car.

The remaining $15 million is to support improving consumer awareness of electric cars and their benefits, installing more charging stations across the state, developing and demonstrating new electric car-enabling technologies and other efforts to put more electric cars on New York's roadways.

Since it was launched, the New York State Energy Research and Development Authority, which administers the initiative, has approved more than $29 million in rebates for New Yorkers who purchased or leased 45 different types of cars. Overall, most people received rebates of $1,100 or more for their new electric cars.

News Yorkers in each county of the state received rebates. Approximately 33% of the approved rebates were received by Long Island consumers, followed by drivers in the Mid-Hudson region.

Below is a complete breakdown of rebate applications by region: 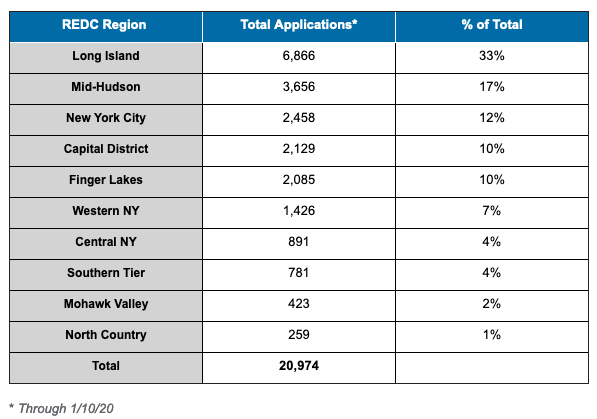 Alicia Barton, president and CEO, NYSERDA said, "The ‘make-ready’ program is the latest signal to New Yorkers that they can confidently and reliably transition to electric vehicles under Gov. Cuomo's vision for advancing the use of cleaner, greener vehicles across the state and ultimately eliminating our carbon footprint. We have already approved more than 20,000 rebates under the Drive Clean Rebate program making it clear that the state is laser-focused on providing residents with affordable clean energy solutions that will reduce emissions, safeguard our environment and ensure cleaner communities."

Gil C. Quiniones, NYPA president and CEO, said, "Accelerating the addition of more charging stations statewide is key to the successful encouragement and support of electric car adoption in New York state. The ‘make-ready’ program will further encourage the important collaboration between utilities and developers so that more charging infrastructure can be built. New York state is committed to creating an environment of convenience and ease for current and potential EV drivers. Our comprehensive approach will help make zero-emission vehicles the natural option for both business and personal travel for New Yorkers."

The “make-ready” program supports the governor's recent State of the State announcement on electric vehicles calling on NYPA to install 10 or more fast-charging locations in every Regional Economic Development Council region by the end of 2022. The governor's EV policy also calls for every travel plaza on the New York State Thruway to have charging stations installed by NYPA by the end of 2024 and for at least 800 new chargers to be installed over the next five years.

The recommendations in the report also build on New York's EV expansion efforts through Cuomo's Charge NY initiative, which set and exceeded its ambitious goals of 30,000 EVs and 3,000 EV charging stations by the end of 2018. More than 45,000 electric vehicles have been purchased in New York since 2013 – more than 48 other states – and New York has installed roughly 4,000 charging stations during the same period.

New York has climate change mitigation policies that are reflected in the adoption of the Climate Leadership and Community Protection Act. The CLCPA establishes the state goal of economy-wide net zero greenhouse gas emissions, as well as a reduction of GHG emissions from all anthropogenic sources by at least 85% over 1990 levels by the year 2050, with an interim target of at least a 40% reduction by the year 2030. The CLCPA requires both substantial emissions reductions and complementary adaptation measures to address the severe impacts of climate change, including transportation electrification as a mitigation measure to harness substantial emissions reductions. New York's transportation sector is responsible for more of the state's carbon dioxide emissions than any other sector, and these emissions are growing.