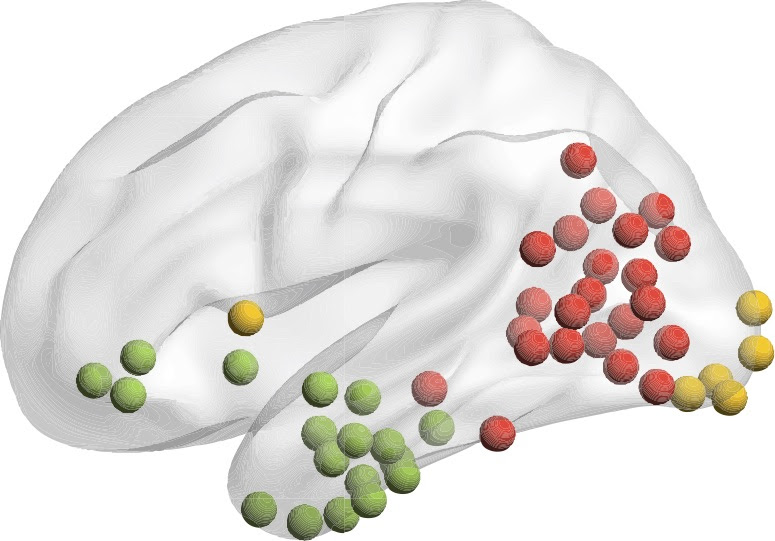 Each collection of colored dots on this University at Buffalo researcher's new brain model represent different clusters of brain regions that studies of patients with stroke or brain disease suggest might lead to impaired knowledge, such as the inability to recognize a common object. (Image courtesy of the University at Buffalo)

He calls it his “chocolate and peanut butter moment.”

A University at Buffalo neuroimaging researcher has developed a computer model of the human brain that more realistically simulates actual patterns of brain impairment than existing methods. The novel advancement represents the union of two established approaches to create a digital simulation environment that could help stroke victims and patients with other brain injuries by serving as a testing ground for hypotheses about specific neurological damage.

“This model is tied accurately to the functional connectivity of the brain and is able to demonstrate realistic patterns of cognitive impairment,” says Christopher McNorgan, an assistant professor of psychology in UB’s College of Arts and Sciences. “Since the model reflects how the brain is connected, we can manipulate it in ways that provide insights, for example, into the areas of a patient’s brain that might be damaged.

“This recent work doesn’t prove that we have a digital facsimile of the human brain, but the findings indicate that the model is performing in a way that is consistent with how the brain performs, and that at least suggests that the model is taking on properties that are moving in the direction of possibly one day creating a facsimile.”

The findings provide a powerful means of identifying and understanding brain networks and how they function, which could lead to what once were unrealized possibilities for discovery and understanding.

Details on the model and the results of its testing appear in the journal NeuroImage.

Explaining McNorgan’s model starts with a look at the two fundamental components of its design: functional connectivity and multivariate pattern analyses (MVPA).

For many years, traditional brain-based models have relied on a general linear approach. This method looks at every spot in the brain and how those areas respond to stimuli. This approach is used in traditional studies of functional connectivity, which rely on functional magnetic resonance imaging (fMRI) to explore how the brain is wired. A linear model assumes a direct relationship between two things, such as the visual region of the brain becoming more or less active when a light flickers on or off.

While linear models excel at identifying which areas are active under certain conditions, they often fail to detect complicated relationships potentially existing among multiple areas. That’s the domain of more recent advances, like MVPA, a “teachable” machine-learning technique that operates on a more holistic level to evaluate how activity is patterned across brain regions.

“A non-linear response ensures that they do light up when we see an object that is both red and octagonal,” McNorgan explains. “For this reason, non-linear methods like MVPA have been at the core of so-called ‘Deep Learning’ approaches behind technologies, such as the computer vision software required for self-driving cars.”

But MVPA uses brute force machine-learning techniques. The process is opportunistic, sometimes confusing coincidence with correlation. Even ideal models require researchers to provide evidence that activity in the theoretical model would also be present under the same conditions in the brain.

On their own, both traditional functional connectivity and MVPA approaches have limitations, and integrating results generated by each of these approaches requires considerable effort and expertise for brain researchers to puzzle out the evidence.

“It was my chocolate and peanut butter moment,” says McNorgan, an expert in neuroimaging and computational modeling. “I’ve had a particular career trajectory that has allowed me to work extensively with different theoretical models. That background provided a particular set of experiences that made the combination seem obvious in hindsight.”

To build his models, McNorgan begins by gathering the brain data that will teach them the patterns of brain activity that are associated with each of three categories – in this case, tools, musical instruments and fruits. These data came from 11 participants who imagined the appearance and sound of familiar category examples, like hammers, guitars and apples, while undergoing an MRI scan. These scans indicate which areas are more or less active based on blood oxygen levels.

“There are certain patterns of activity across the brain that are consistent with thinking about one category versus another,” McNorgan says. “We might think of this as a neural fingerprint.”

These MRI patterns were then digitized and used to train a series of computer models to recognize which activity patterns were associated with each category.

“After training, models are given previously unseen activity patterns,” he explains. “Significantly above-chance classification accuracy indicates that the models have learned a generalizable relationship between specific brain activity patterns and thinking about a specific category.”

To test whether the digital brain models produced by this new method were more realistic, McNorgan gave them “virtual lesions” by disrupting activations in regions known to be important for each of the categories.

He found that the mutually constrained models showed classification errors consistent with the lesion location. For example, lesions to areas thought to be important for representing tools disrupted accuracy for tool patterns, but not the other two categories. By comparison, other versions of models not trained using the new method did not show this behavior.

“The model now suggests how brain areas that might not appear to be important for encoding information when considered individually may be important when it’s functioning as part of a larger configuration or network,” he says. “Knowing these areas may help us understand why someone who suffered a stroke or other injury is having trouble making these distinctions.”