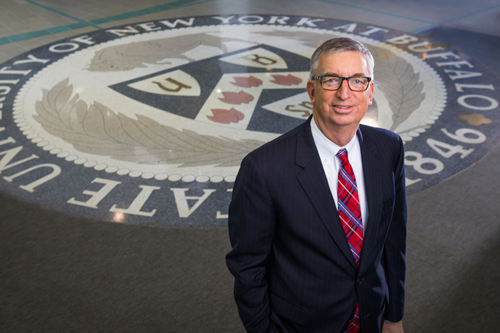 The appointment of A. Scott Weber as the university's second-ranking officer is effective immediately. (Photo by Douglas Levere, University at Buffalo)

A. Scott Weber has been named provost and executive vice president for academic affairs at the University at Buffalo following an international search launched in September.

The announcement was made by President Satish K. Tripathi, who cited Weber’s significant leadership skills, outstanding academic credentials and clear vision for advancing UB as key factors in his elevation to the university’s second-ranking officer.

“Scott Weber is a consummate university citizen who has brought exceptional energy, ideas and perspectives to every role he has held at UB – from professor and department chair to vice president for student life and interim provost,” Tripathi said. “Consequently, he has a depth of expertise and leadership that positions him exceedingly well to help us excel in our mission-driven priorities and deepen our impact on the many communities we serve.

“Scott’s keen academic vision combined with his collaborative approach, his ability to continuously innovate, his kind and focused manner, and his steady hand elevated his candidacy among a group of truly stellar candidates for UB provost and will greatly benefit our university community as we continue to advance our national and global reputation.”

As provost, Weber will work closely with Tripathi to help UB achieve its ambition of becoming one of the nation’s top 25 public research universities by increasing the impact of its research, academic and engagement mission.

Under Tripathi’s leadership, Weber will be responsible for setting a course for unparalleled excellence across the university’s academic enterprise and enhancing UB’s culture of equity and inclusion, all with the goal of creating greater societal impact through its mission-based priorities.

“I am honored, excited and humbled to be selected as the university’s next provost,” Weber said. “As a young faculty member joining the university many years ago, I could not have imagined having the opportunity to impact the university so deeply. Together with President Tripathi, I look forward to continuing to work with senior leadership, faculty, staff and students to further advance UB’s position as one of the world’s great public research universities.”

The search committee, which included UB senior leadership, faculty, staff, students and external constituents, was chaired by David A. Milling, senior associate dean of student and academic affairs in the Jacobs School of Medicine and Biomedical Sciences at UB, and Catherine Norgren, professor in the department of theatre and dance in the College of Arts and Sciences.

Under his leadership, Student Life reorganized its student engagement programs. It now regularly conducts surveys to prioritize better programming during the first-year experience. Weber also reset the priorities of UB’s career services to have a greater emphasis on employer engagement, improved tracking of post-graduation success of UB’s undergraduates, initiated career development for students employed on campus, and pushed for greater collaboration between academic advising and career development. He also has moved to upgrade facilities critical to the student experience, including next-generation libraries and a planned wellness center.

In these positions, he led successful innovations designed to enhance the academic experiences of students such as “Finish in 4,” the university’s nationally acclaimed program to help students earn their degrees in four years, as well as “UB Curriculum,” the university’s revision of its general education curriculum.

He developed comprehensive centralized enrollment planning and functions, which have led to increased enrollment overall, greater diversity in the undergraduate student body, an elevated student academic profile, and better coordination and efficiencies in academic support units.

He also elevated the Cora P. Maloney College to a center designation to increase its stature and cohesiveness while significantly upgrading the facilities for UB’s equal opportunity program. He pushed for programs that help make UB more distinctive, including establishing the Blackstone LaunchPad powered by Techstars, expanding the undergraduate academies, establishing the Center for Excellence in Writing, growing the University Honors College and establishing an office of fellowships and scholarships.

Weber joined the UB faculty in 1983 and has been named professor of the year twice by the UB student chapter of Tau Beta Pi, the engineering honor society. His teaching has focused on environmental engineering, with a specialization in process analysis and design for soil and water bioremediation.

His research efforts are directed toward biodegradation of chemicals in water and soil, particularly pharmaceuticals, and the reclamation of environmentally impacted sites known as brownfields.

As chairman of the department of civil, structural and environmental engineering from 2005-10, Weber guided the establishment of UB’s transportation engineering program and the department’s rise in the U.S. News & World Report rankings.

Weber is a former member of the Water Environment Research Foundation’s board of directors and is past chair of the foundation’s research council and its literature review committee. He has served as a consultant to industries and government agencies on environmental issues.