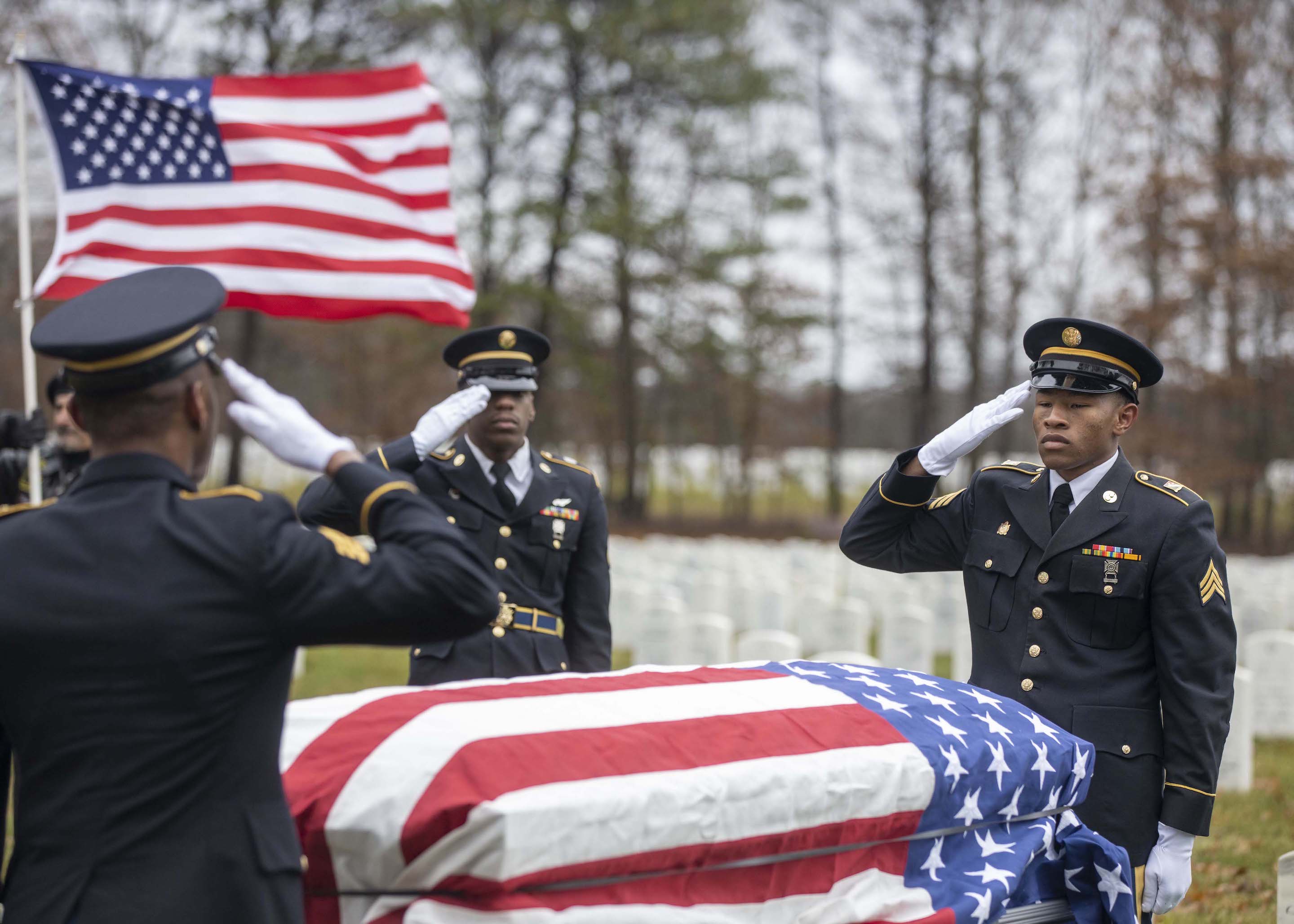 The New York Army and Air National Guard expects to provide military honors at the burials of 11,045 veterans during 2019, according to records from its Honor Guard teams across the state.

In 2018, the New York Army and Air National Guard provided military burial honors 11,326 times, while in 2017 a total of 11,170 military interment ceremonies were conducted.

Most of these services involved two National Guard Soldiers or airmen presenting an American flag to the veteran's family, and sounding taps on an electronic bugle.

New York Army National Guard teams located across the state are expected to conduct 8,622 funerals by the end of this year, according to Peter J. Moran, the New York state coordinator for the military funeral honors program. As of Dec. 27, the Army National Guard Honor Guard Soldiers had conducted 8,456 missions.

The New York Air National Guard's Honor Guard services are provided by airmen assigned to the five Air Guard wings located across the state and the Eastern Air Defense Sector in Rome.

Since 2000, federal law has mandated that any military veteran who did not receive a dishonorable discharge from the armed forces is eligible for military honors at his or her funeral.

The law mandates all former service members' funerals must include the folding and presenting of an American flag to each veteran’s survivors, and the playing of taps. The Honor Guards normally use an electronic bugle – a bugle with a sound system and speaker inside – to provide this other service.

Among the burials conducted by the New York Army National Guard in 2019 was the Oct. 12 interment of Sgt. Francis S. Currey, a World War II veteran who received the Medal of Honor for his actions during the Battle of the Bulge. Currey, a resident of Selkirk, was one of the last three living Medal of Honor recipients from World War II when he died.

The New York Army National Guard also provided honors for a one-time Army Private Needham Mayes whose family appealed to the secretary of the Army to have a 1956 dishonorable discharge revised so he could be buried in a veterans cemetery with military honors. The secretary changed the ruling for Mayes, a soldier who went on to distinguish himself in civilian life.

An Honor Guard team provided full honors for Mayes, a New York City resident who died at the age of 85 on Veterans Day.

The Honor Guard's Rochester Office conducted 742 funerals, while 554 were conducted in the Syracuse area and 317 services were staffed from the office in Horseheads.

The New York Army National Guard has 40 soldiers on full-time duty who provide military honors and another 88 who serve as members of an Honor Guard on an as-needed basis.

Each Honor Guard member goes through a training program to ensure they can perform the movements correctly.

The Honor Guard of the 106th Rescue Wing, located at F.S. Gabreski Air National Guard Base in Westhampton Beach on Long Island, is the busiest one in New York. The wing provides Honor Guard services at Calverton National Cemetery. It conducted 1,058 interments in 2019.

The Honor Guard of the 107th Attack Wing, which operates from Niagara Falls Air Reserve Station, conducted 412 military funerals in 2019.

The 109th Airlift Wing Honor Guard, which is located at Stratton Air National Guard Base in Scotia, will conduct 375 funeral missions in 2019.

The 105th Airlift Wing, which is located at Stewart Air National Guard Base in Newburgh, provided Honor Guard services at 240 funerals in 2019.

People eligible for funeral honors include:

•Military members on active duty or in the Reserves, which includes the National Guard;

•Former military members who served on active duty and departed under conditions other than dishonorable;

•Former military members who completed at least one term of enlistment or period of initial obligated service in the Selected Reserve and departed under conditions other than dishonorable;

•Former military members discharged from the Selected Reserve due to a disability incurred or aggravated in the line of duty;

•Serving military members and retirees are eligible for services that can include pallbearers and a firing party as well as the basic funeral functions.