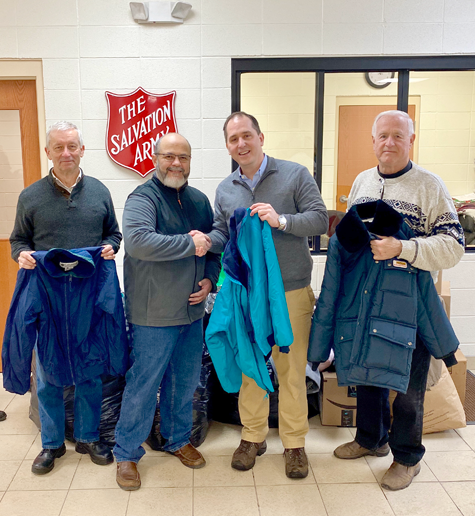 Assemblyman Mike Norris (second from right) drops off winter clothing items that were collected from the community as part of his annual drive. Standing with Norris are Salvation Army Maj. Jose Santiago (second from left) and Salvation Army board members Larry Eggert (far left) and Dan Wilson (far right).

Assemblyman Mike Norris delivered warm winter clothing items donated from the community to local charities, so that the items could be available for those in need in time for the winter holidays.

“Every year, I am overwhelmed by the generosity of our community – and this year was no exception. Thanks so much to everyone who donated. I know your winter clothing items are going to really help so many stay warmer this winter,” he said. “All of the donations stay local. I am especially thankful to see the massive variety of items donated this year, from infant clothing all the way to adult clothing and boots for all ages. Thank you all so much.”

Winter clothing items including coats, hats, mittens, gloves and scarves were collected at Norris’ office in Clarence and at partnering locations across the 144th Assembly District.

This year the public was also asked to donate boots, particularly children’s boots, as these items are in high demand.

All of the items donated were dropped off by the assemblyman at local charities, including the Hope Project of Western New York, Youth Mentoring Services in Lockport, and Lockport Salvation Army.

Norris represents the 144th Assembly District, which is comprised of portions of Erie, Niagara and Orleans counties. To learn more about Norris, visit his assembly website.