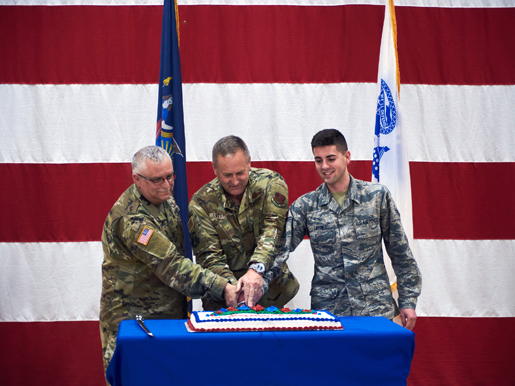 A 21-year-old airman with two years of service, and a 59-year-old soldier who has served since 1984 cut the birthday cake on Friday, Dec. 14, as New York National Guard headquarters in Latham marked the 383rd birthday of America's oldest military force.

While the National Guard as an idea is older than the United States, role of the militia – which is now the National Guard – is built into the Constitution, LaBarge told 100 soldiers, airmen and civilian employees during the ceremony.

“It's the people who responded to Herkimer County to help clean up after the flooding in November, and it is the people who will deploy to Kuwait with the 42nd Infantry Division in 2020,” he said. "You are our home game and our away game.”

Lapinel, who is assigned to the 109th Airlift Wing at Stratton Air National Guard Base, serves as an intelligence analyst in the 109th Operations Support Squadron. He joined the New York Air National Guard because he's always been interested in the military and he wanted to do something that would help pay for college, he said.

"My career as a whole to this point has been an amazing experience," Lapinel said.

He just returned from a survival, evasion, resistance and escape training course in Spokane, Washington, where he learned how to survive behind enemy lines.

"Through that I learned a lot, met some great people, and really opened my eyes to the realities that some military members face," Lapinel said.

He explained it was an honor to represent the young soldiers and airmen of the New York National Guard during the birthday event.

Townsend joined the National Guard after leaving active duty, because he wanted to serve his community. He said he’s proud of the many times he's responded to weather emergencies and other state disasters over the years.

"I am proud to have outlasted my own expectations and to have served with my fellow soldiers," Townsend said.

The National Guard, today composed of the Army National Guard and the Air National Guard, traces its birthday back to Dec. 13, 1636, when the General Court of the Massachusetts Bay Colony passed a law establishing formal militia companies in the colony. These companies were made up of all adult males older than 16, and were expected to meet and train in military skills regularly.

Today, the units, which trace their lineage back to those original three regiments, are the oldest in the Army.

The U.S. Army, meanwhile, traces its birthday back to June 14, 1775, the day the Continental Congress voted to take command of a colonial army besieging British troops in Boston.

In New York, the first citizen-soldiers were members of the Burgher Guard, organized by the Dutch East Indian Company in 1640 to help protect New Amsterdam from their English neighbors in Massachusetts and Virginia or from hostile natives.

After New Amsterdam became the English colony of New York in 1665, a militia modeled on the system used in Massachusetts and other English colonies was put in place.

Citizen Soldiers of the militia and National Guard have fought in all of America's wars from King Philips War against Native Americans in the New England Colonies in 1675 to Afghanistan today.

Some notes from New York National Guard history include:

•New York gave the country the term National Guard for its militia forces when the 2nd Battalion, 11th Regiment of the New York Militia, renamed themselves the National Guard to honor the Marquis de Lafayette, a hero of the American Revolutionary War who had commanded a force called the "Guard de National" in the early days of the French Revolution.

•The 1st Battalion, 69th Infantry, was portrayed in the 1940 movie "The Fighting 69th" starring Jimmy Cagney and Pat O'Brien. The movie was based on the historic unit's service in World War I.

•The New York Army National Guard's 42nd Infantry Division was given its nickname "The Rainbow Division" during World War I by Gen. Douglas MacArthur. MacArthur, then a colonel, was charged with organizing a division of National Guard troops from across the country to deploy to France in 1917. He described the division as reaching across the country "like a rainbow."

•The band of the New York National Guard's 369th Infantry Regiment, an African American unit originally formed as the 15th New York, is credited with introducing jazz music to Europe during World War I. The 369th became known as the Harlem Hell Fighters.

•The soldiers of the New York National Guard's 105th Infantry Regiment faced the largest Japanese "banzai" attack of the Second World War on July 7, 1944, on the Island of Saipan. The 1st and 2nd Battalions of the 105th Infantry had 650 men killed and wounded, but killed more than 4,300 Japanese soldiers. Three regimental soldiers posthumously earned the Medal of Honor.

•The New York Air National Guard's 138th Fighter Interceptor Squadron, based at Syracuse, was one two Air National Guard units assigned to provide aircraft for the defense of the U.S. on March 1, 1953. Today, the unit operates the MQ-9 remotely piloted aircraft.

•The New York National Guard's 42nd Infantry Division served in Iraq in 2005 and was the first National Guard division headquarters to deploy to a combat zone since the Korean War in 1953.