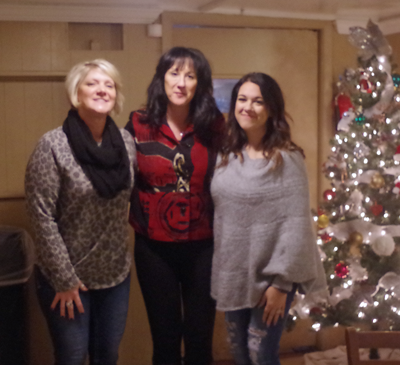 WBA votes in Best Business of 2019

Vox Cycle, owned by Carol and Terry Vosburgh, was also congratulated for hosting WNY Heroes at their business this past Saturday. WNY Heroes is an organization that supports veterans in the Western New York area by providing financial assistance to those in need. One of the services WNY Heroes provides is to children by filling backpacks on their return to school.

“We sell guns, ammunition, accessories,” said the newly awarded Rex Vosburgh. “We do private party transfer, online transfers, ammunition transfers.” Caliber Arms and Ammo is located at 3287 Niagara Falls Blvd. and is open 6-8 p.m. Monday-Friday by appointment only, and 10 a.m. to 2 p.m. Saturday. Any after hours on Saturday or the full day Sunday is also by appointment only.

“I do that part time, I have a regular full-time job before time as well,” Vosburgh said.

Tomlin was excited to win the award.

“I’m from BankOnBuffalo and we have a temporary location in Wheatfield. I’ve been in banking about 15-16 years and BankOnBuffalo came to me and said, ‘You should look at us,’ ” she said. “I left where I was at and I built my dream team. I cherry-picked all these guys. We worked together in a different place, and they all came with me. There’s about seven of us who work there. It’s just a great culture at the bank and a great place for us to be.”

“The original crew has been here forever,” Maerten said. “We decided we would stick around for another year, but nominations can be opened. If somebody wants to volunteer …”

There were none, and Maerten declared the old board would continue to lead the group.

“We changed our policy, our bylaws. We have three board members each serving a two-year term,” Maerten said. “Jeff Taylor is going from 2019 to 2021; Michael Doktor, his office will be open next year; and Tom Grimm as of 2019.”

Grimm indicated that he would serve another two-year term, but would step down if anyone else wanted to come aboard. No one did. With rounds of good cheer, he was reinstated as a board member.

Dues for the organization were raised to $50 from $35 and are due Jan. 15. Each monthly meeting includes a dinner and social hour, as well as discussions with monthly guest speakers. Donations for the scholarship funds the group awards are also due by Jan. 15.