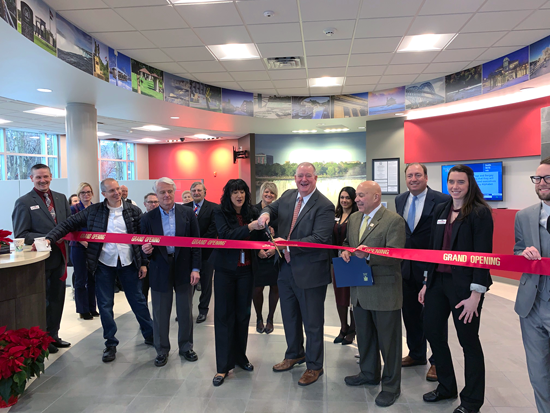 BankOnBuffalo recently held a ribbon cutting to celebrate the opening of its most technologically advanced and customer-centric branch, as well as its first branch in the City of Niagara Falls.

Located at 7121 Niagara Falls Blvd., the new branch office is the first solely constructed for BankOnBuffalo, and has been designed as the “bank of the future,” offering state-of-the-art features to make financial transactions and information gathering easier for bank customers.

“This is truly a flagship branch for our Niagara Falls customers, who will be the first to experience the technological advancements that will become the hallmark of 21st Century banking,” said Martin T. Griffith, BankOnBuffalo president. “This dynamic setting for banking will be complemented by the highly personal approach BankOnBuffalo brings to helping area businesses and residents successfully address their financial issues.”

A major feature offered by the branch, and one of the first in Western New York, is an Enhanced Teller Machine (ETM), which provides customers with the convenience of talking with a banker via interactive video about their accounts before and after normal banking hours. They can use the drive-through lane to access the ETM to perform such transactions as making deposits, withdrawals, and loan payments, transferring funds and checking on account balances.

In anticipation of this new branch office, BankOnBuffalo initially established a temporary Niagara County branch at 6947 Williams Road in the Town of Wheatfield. That branch will continue to remain open for business during the launch of the new Niagara Falls branch.

“The reception we’ve received over the past 16 months of operation from Niagara County businesses and residents has been overwhelming and makes us excited about what this new permanent branch will do for the betterment of the Niagara Falls community,” Griffith said.

Leading a homegrown team at both local branches is Niagara County and Lewiston native, Annette Tomlin, who is serving as Niagara Regional community office manager for BankOnBuffalo.

The 3,400-square-foot Niagara Falls branch building was designed by LaBella Associates and its architect, Rich Nardini. It is part of a plaza developed by Consumer’s Beverages President Neil Kavanaugh. BRD Construction was the general contractor.

BankOnBuffalo began as a start-up division of CNB Bank with a loan origination office and in February 2017 opened a full-service bank branch on the first floor of the Electric Tower in downtown Buffalo. Since then, BankOnBuffalo has opened full-service branches in Orchard Park, Williamsville and Wheatfield, and created a private banking and wealth management service called BankOnBuffalo Investment Advisers.

BankOnBuffalo established its regional headquarters on the historic, renovated seventh floor of the Electric Tower in February 2019. 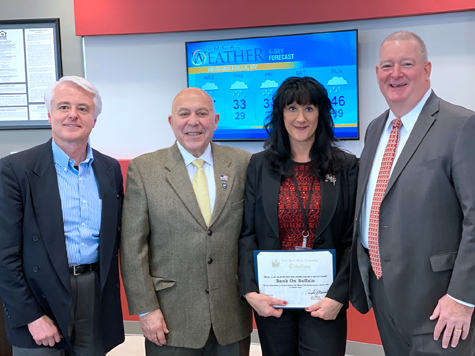 As a community bank, BankOnBuffalo, a division of CNB Bank, is being developed by local people and businesses. This local decision-making increases the level of service provided to the communities in and around Buffalo and brings growth to the entire region. More information is available at www.BankOnBuffalo.bank.