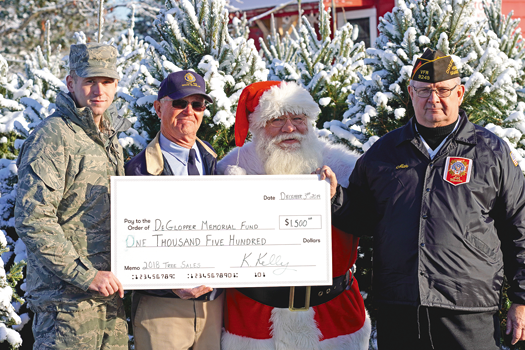 Each year, Kelly’s Country Store donates a portion of the previous year’s proceeds of their on-site fresh Christmas tree sales to worthy causes that are dear to the Kelly family. The Kelly family choose the DeGlopper Memorial because this is the place on Grand Island where residents, past, present and future who proudly serve their country, are remembered and honored.

Tuesday, Kelly’s presented a check for $1,500 to representatives of the DeGlopper Memorial.

Pictured, presenting a check for $1,500, is a member of the Kelly family, Staff Sgt. Alex Kelly of the Air Force Reserve, to Ray DeGlopper, post commander of the Grand Island American Legion Post No. 1346; Santa Claus; and Alan Lee of the Pfc. Charles N. DeGlopper Memorial Veterans of Foreign Wars Post No. 9249.

DeGlopper and Lee are members of the DeGlopper Memorial Expansion Committee, which is spearheading the improvements at the park located at the intersection of Grand Island Boulevard and Baseline Road. The park is named after Ray DeGlopper’s uncle Charles, who was posthumously awarded the Medal of Honor for his actions in the D-Day invasion.

For more information on DeGlopper Memorial, visit online at degloppermemorial.org.

Sales of Douglas fir and Fraser fir trees this year will support a donation next year to the Grand Island Fire Co., said Kevin Kelly.

The store is located at 3121 Grand Island Blvd. The Christmas tree lot is open during regular store hours. Santa will be in the store Monday, Wednesday and Friday from 5 to 9 p.m. and weekends from noon to 6 p.m.