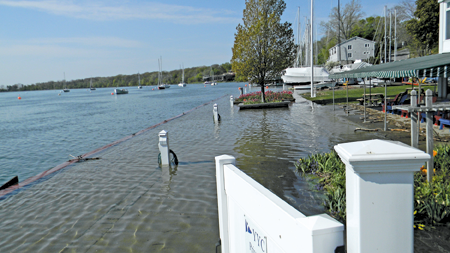 A look at the flooded Youngstown Yacht Club (file photo)

Building on the New York State Department of Environmental Conservation’s lawsuit against the International Joint Commission, Attorney General Letitia James and Gov. Andrew M. Cuomo today filed an expanded lawsuit on behalf of New York state against the IJC for failing to implement its flood protocol for the Moses-Saunders Power Dam.

Specifically, they claim the IJC operated under a protocol known as “Plan 2014,” which required that, when water levels reach extremely high levels, the dam “shall be operated to provide all possible relief to the riparian owners upstream and downstream.” The suit alleges that, “As a result of the IJC’s actions and failures to act in response to flooding in 2017 and 2019, New York incurred substantial and potentially avoidable damages.”

This lawsuit expands on the suit filed by DEC last month by also including damages incurred by all state agencies, including DEC, which collectively number more than $50 million.

“The International Joint Commission failed their primary mission of properly managing Lake Ontario’s water levels,” James said. “We will not stand by while the IJC continues to expose New Yorkers to dangerous flooding. The individuals and families along the shoreline do not deserve the pain of having to deal with the damages to their homes and businesses – damages that could have been avoided in the first place. We are hopeful that this lawsuit will bring safety, security, and justice to those most impacted by IJC’s negligence.”

“The IJC’s mismanagement of Lake Ontario water levels wreaked havoc on vulnerable shoreline communities and the resulting damage carries a stiff price that shouldn’t be shouldered by the state of New York or by the very property owners the commission was supposed to protect,” Cuomo said. “The IJC has been wholly unresponsive to our complaints and have taken no action to make the situation better, and this expanded lawsuit will allow us to better recoup the costs of the damage and to hold the commission accountable.”

DEC Commissioner Basil Seggos said, "My thanks to the attorney general’s office for joining our effort to deliver justice to the victims of the IJC’s gross incompetence. The IJC had one job – manage water levels to protect people and property – and it failed miserably. This is a clear-cut case in which impacted shoreline residents are the victims, and the IJC is responsible. We welcome the might of the AG’s office and look forward to presenting our case in court.”

The office of the attorney general is bringing this action on behalf of the departments and agencies of the state of New York, including, but not limited to the DEC, the Department of Transportation, the Division of Homeland Security & Emergency Services, the Division of Military and Naval Affairs, and the Office of Parks, Recreation and Historic Preservation. Directed by Cuomo, DEC initiated litigation against the IJC on Oct. 9. Today’s action incorporates DEC’s prior complaint, as well as adding impacts to other New York agencies.

The office of the attorney general and Cuomo’s office seek compensatory damages in excess of $50 million dollars for damages that include:

Damages consisting of monies the state spent and will spend to repair harms to property, municipalities, and residents; and

Damages to natural resources, including the value of lost recreational activities.

Flooding on the shores of Lake Ontario in 2017 cost the state damages in excess of $4 million in damages, which included damage to state parks, beaches, campgrounds, boat docks and boat launches. This was disastrous for thousands of businesses and New Yorkers along the Lake Ontario shoreline in Cayuga, Jefferson, Monroe, Niagara, Orleans, St. Lawrence and Wayne counties.

Additionally, in 2019, flooding cost state property damages in excess of $2 million in damages. The public lost the value of the use of some facilities while they were closed for repairs or remained submerged under floodwaters. An emergency was declared for the counties of Cayuga, Jefferson, Monroe, Niagara, Orleans, Oswego, St. Lawrence and Wayne as a result of the damage caused by continued high Lake Ontario water levels. The state activated the State Emergency Operations Center for 125 days to conduct operations across eight New York counties and hundreds of miles of shoreline.

Additionally, the state has spent more than $100 million helping homeowners, small businesses, municipalities and others repair property damage from flooding in 2017 and 2019. These funds have been distributed through New York State Homes and Community Renewal in connection with the Lake Ontario-St. Lawrence Seaway Flood Relief and Recovery Grant Program, as well as through Empire State Development and the Lake Ontario Small Business Recovery Fund.

A press release from the A.G.’s office said, “The U.S.-Great Britain Boundary Waters Treaty, Plan 2014, the 2016 Supplementary Order of Approval, and other applicable laws impose a duty on IJC to operate the dam in a manner that safeguards the interests of riparian property owners on the New York shores of Lake Ontario and that meets a standard of reasonable care for those property owners.”