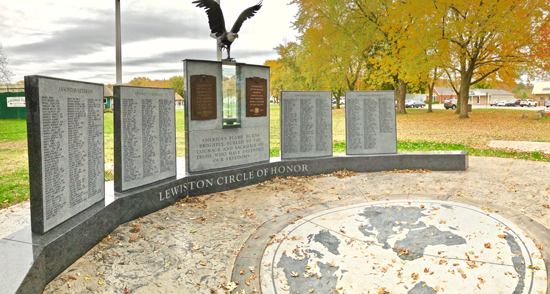 A sweeping look at the "Circle of Honor" in Lewiston.

The engraved and polished granite is ready. The world map has been embedded within the plaza. The iconic eagle has been securely raised into position. The flame that will burn forever is about to be set ablaze.

After nearly two years of planning, fundraising, engineering and construction, the new Veterans of Foreign Wars “Circle of Honor” will be dedicated during a nighttime ceremony at 6:15 p.m. Veterans Day, Monday, Nov. 11.

The project has been hailed as “one of the most distinctive small town veteran memorials in the nation” because of its varied features. The memorial is located at the corner of Portage Road and Center Street in Lewiston, within Academy Park.

The VFW is encouraging everyone to attend this historic dedication ceremony.

A traditional Veterans Day ceremony will also be observed 11 a.m., commemorating Armistice Day, which ended World War I – the “War to End All Wars.” A similar salute is traditionally held at the 11th hour, of the 11th day, on the 11th month.

The nighttime ceremony, which is expected to run less than 30 minutes, will feature a flyby of the Niagara County Sheriff’s Office helicopter, plus the Air Force Honor Guard, the Lewiston Cub Scout Pack 855, the Lewiston-Porter Vocal Jazz Group singing the national anthem, and more than 20 reenactors and living history enthusiasts portraying a “Procession of Honored History” highlighting American veterans from the American Revolution to the Iraq War.

Local singer Carla DelGrosso will cap off the evening with her rendition of “God Bless America.”

Federal Judge Michael Roemer will serve as master of ceremonies and introduce several dignitaries, gold sponsors, and Janet Dunstan, who will speak in honor of her brother, Marine Lance Cpl. Stanton Dyke, who, at just 23, was killed in Vietnam on Feb. 9, 1968.

VFW Post 7487 Cmdr. Bill Justyk said, “This is an historic moment for Lewiston. Our new ‘Circle of Honor’ will stand for a thousand years as a testament to our community's patriotism and commitment to the cause of freedom. Everyone who sees it will know that Lewiston has always sent its finest to defend our freedoms, including those who have paid the ultimate sacrifice."

The “Circle of Honor” was made possible from donations from both public and private sources. No tax dollars were used. The Town of Lewiston and Niagara County supported the project with Greenway funds that were secured from the New York Power Authority. The Village of Lewiston provided the property at Academy Park and supplies the gas for the eternal flame. Both the village and town assisted with services through their respective public works departments.

The Glynn family (Maid of the Mist), Sevenson Environmental Services Inc., the Lewiston Kiwanis Club, the American Legion and Favorite’s Pizza are among the major sponsors.

When the memorial is unveiled, it will include the names of about 550 veterans, all of whom lived or worked in Lewiston. The memorial has room to accommodate about 500 more names.

Anyone can apply to have family members, friends or loved ones included on the new memorial. There will be no restrictions regarding the time of service. Those who have been honorably discharged from serving in the armed forces from the Revolution to current time are eligible. Applications can be found online at www.lewistonvfw.org.

New names will be added twice a year for presentation on Memorial Day and Veterans Day.

To be included, the VFW requests applicants fill out a form that can be accessed online at the Lewiston VFW website, lewistonvfw.org, along with a copy of proof of honorable service, and a donation of $150.

To highlight the significance of the eternal flame, there is an engraving below with the words, “America’s Flame Burns Brightly, Fueled by the Courage and Sacrifice of Those Who Have Defended Our Freedoms.” Also, the legacy bronze plaque, which was dedicated May 30, 1955, has been preserved and included as part of the new memorial, along with a new plaque that chronicles the re-dedication.

VFW Quartermaster Vince Canosa said, “Nearly every segment of the community stepped up to the plate to help with this project, and we are so grateful that Lewiston has been able to honor its service men and women with such a beautiful memorial that will inspire generations to come. Our dreams have come true, and we can stand proud knowing that local veterans are getting the recognition and esteem they deserve, but our job is far from over. Maintenance and upkeep of the memorial will be part of an ongoing effort that will require the support and generosity of our citizens. We appreciate everyone’s help.”

Donations can be made several ways, including sending checks to Lewiston VFW Post 7487, PO Box 1164, Lewiston, NY 14092; going online and Googling “Lewiston NY Circle of Honor”; making a GoFundMe donation; or by contacting Canosa at 716-343-4358.

Ten “first day covers” have been set aside that feature the recently released “Circle of Honor” commemorative stamp with a Lewiston postmark dated Nov. 11, 2019. These rare collectibles are available for a $100 donation to the VFW.

Bruce Sutherland, a VFW member and retired Air Force colonel, said, “This is the biggest project our organization has ever undertaken, and we realized from the beginning that we were standing on the shoulders of our predecessors who dedicated our first memorial in 1955. We’re confident they would be pleased with the results. The ‘Circle of Honor’ is in a much more prominent location, and the eternal flame has been raised so everyone can see it as they drive by on Center Street.”

It is anticipated a webcam will soon be installed to provide surveillance security, and a streaming internet video that people can view all over the world in real time. Benches will also be installed on the sides of the memorial that have been donated by the Kiwanis Club; the family of Joseph Weber III; Matthew Zarosl, in memory of his wife, Barbara; and Eric Matthews, in memory of his grandfather, Marion J. Matthews.