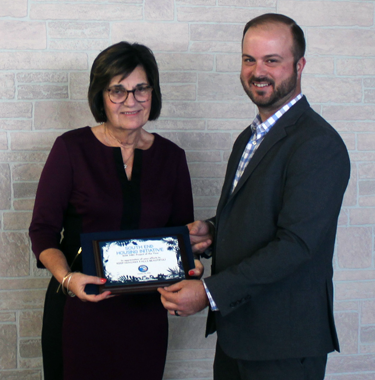 A collaborative effort spearheaded by Niagara University to revitalize the south end of Niagara Falls and reinvigorate Niagara Falls’ main economic corridor was honored during the Niagara Beautification Commission’s Annual Awards Luncheon on Wednesday at the Niagara Falls Train Station. The awards recognize and honor the volunteer efforts that help to make and keep the Niagara Falls community beautiful.

The Niagara University-led south end housing initiative received the Project of the Year award in recognition of its signature event, “Rock the Block.” For the past two years, hundreds of volunteers from the community and local businesses gathered in the south end of Niagara Falls to do minor home repairs, painting, landscaping, fencing, and general cleanup in that area of the city. In 2019, 224 volunteers worked on 24 homes, 15 alleys, and numerous medians, stretching over 34 city blocks from Niagara Street to Pine Avenue, with an economic impact of $73,050.

The south end housing initiative is made up of 30 partners from various organizations throughout Niagara County, with a goal of revitalizing housing and expanding the potential for mixed-use development in designated areas of the city.

“The biggest thing about the south end housing initiative is that it is collaborative,” said Patti Wrobel, executive director of the university’s Rev. Joseph L. Levesque, C.M. Institute for Civic Engagement, which oversees the initiative. “It includes business, government, education, not for profits, but most importantly, the residents. That’s what really matters. And when we started with this a little over two years ago, our ultimate goal was to get new and interested homeowners in to populate the south end. Employers were saying they were having a hard time attracting employees to come into the city because of housing. All of us in the south end housing initiative see the vision of Niagara Falls coming back, and we’re committed to it.”

Other award winners included Power City Eatery, owned by NU alumni Joseph Hotchkiss, Class of 2014, and Kyle Bajor, ’13, which was named Member of the Year for its efforts to enhance the streetscape around their business; Niagara Falls National Heritage Area and Niagara Falls Murals, which was recognized with the Chairperson’s Award for the public art project along Main Street and Depot Avenue; and Allison Boynton, who received the Josi Fera Award for her volunteer efforts.

The Niagara Beautification Commission was formed for the purpose of promoting the beautification of the Niagara Falls area by mobilizing the volunteer resources of the community’s private and public sectors to implement visual enhancements beautifying the community, to educate and promote public awareness, and inspire pride in the community.