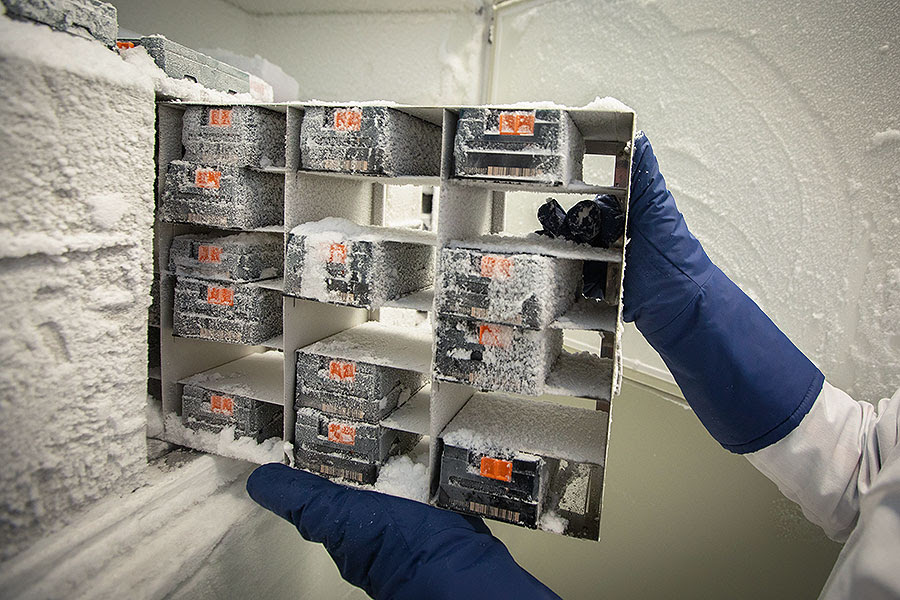 The UB Biorepository has the capacity to collect, process, store and distribution millions of biological specimens that are maintained at a constant -81 degrees Celsius. (Photo by Douglas Levere/University at Buffalo)

A boon to both academia and industry, the facility will enhance targeted research on diseases common to the region, such as multiple sclerosis and stroke

Today, the University at Buffalo officially launched the UB Biorepository, a critical new facility in the Clinical and Translational Research Center that will be a powerful resource regionally and throughout the state in driving biomedical innovation in academia and industry.

From molecular profiling of samples to integration with clinical data about patients, the facility has the capacity to collect, process, store and distribute millions of biological specimens that will allow UB and its research and industry partners to harness the discoveries that ultimately benefit patients. The UB Biorepository strengthens the ability of researchers in academia and industry to advance precision medicine by developing new drugs and diagnostic tools targeted to specific disorders and even individual patients.

“The biorepository is important to UB for many reasons,” said Venu Govindaraju, Ph.D., vice president for research and economic development at UB. “To foster broad academic and industry collaboration, to create a valuable resource not just for UB researchers, but for partners at institutions across New York state, and to make UB pre-competitive for significant federal funding opportunities.”

Michael E. Cain, M.D., vice president for health sciences and dean of the Jacobs School of Medicine and Biomedical Sciences at UB, added: “The extensive use of biological materials is absolutely critical today in the fields of biomedical science, precision medicine and clinical science. The biorepository is already playing a significant role in increasing UB’s research enterprise and serving as a hub for collaboration.”

Part of Buffalo Institute for Genomics and Data Analytics

Funded by UB and New York state, the UB Biorepository is a critical part of the Buffalo Institute for Genomics and Data Analytics (BIG), which connects life sciences companies to technical expertise and high-tech facilities at UB. BIG is supported by Gov. Andrew M. Cuomo’s economic development efforts in Buffalo, and is one of the key initiatives helping to build the region’s innovation economy by leveraging its life sciences assets to drive economic growth.

According to Andrew Brooks, Ph.D., chief operating officer and director of technology development at RUCDR Infinite Biologics at Rutgers University, and a consultant to the UB Biorepository, a centralized biorepository is today an essential ingredient in advancing biomedical research and collaborations.

While in the past, the emphasis was on the safe storage and preservation of biospecimens, the explosion of big data in biomedicine has created major new opportunities for innovation based on the far more detailed information now available about each biospeciman. The UB Biorepository provides comprehensive annotation of biospecimens, through which the functions and locations of genes and coding regions in a genome are identified, as well as big data integration.

“With each individual sample potentially providing as many as hundreds of thousands of annotations, or datapoints, whether you’re studying the genome, the proteome or the microbiome, the biospecimens in the biorepository are an incredibly rich resource,” said John E. Tomaszewski, M.D., SUNY Distinguished Professor and the Peter A. Nickerson Chair of Pathology and Anatomical Sciences in the Jacobs School.

While the facility operates 24/7 with multiple backup systems, maintaining specimens at a constant minus-81 degrees Celsius and conducting blood fractionation (separating out specific components) and pathology services, as well as nucleic acid extraction, the staff at the biorepository and those who use it are keenly aware that patients are at the center of everything they do.

“Every biospecimen represents a patient,” said Norma J. Nowak, Ph.D., executive director of UB’s New York State Center of Excellence for Bioinformatics and Life Sciences, and faculty leader with Tomaszewski of the biorepository. Nowak, whose research directly contributed to the mapping of the human genome, has seen precision medicine evolve over the decades.

“As part of the human genome program, there was a perception that, once we sequenced that first genome, we would have the answers to solving human disease,” she said. “Now we know that individuals’ genomes are different and that those differences, at the molecular level, result in how individuals respond to therapeutics and which diseases they may be at risk for.”

She described the UB Biorepository as comprehensive and “disease agnostic,” meaning that it will cover every kind of disease; it also includes biospecimens that are part of population health studies and may not be associated with any disease at the time of collection, which will contribute meaningful information about exposures and epidemiological or environmental health questions.

In particular, Nowak explained, having a biorepository in Western New York allows local researchers in both academia and industry to target diseases that have a high incidence in Western New York, such as multiple sclerosis (MS). For example, she noted biospecimens gathered by Bianca Weinstock-Guttman, M.D., professor of neurology in the Jacobs School and a physician with UBMD Neurology, are housed in the biorepository and will help researchers address fundamental questions about who is at risk for MS and why.

Nowak added the biorepository will become an especially valuable resource since it will eventually reflect the ethnic and international diversity of Buffalo and Western New York.

“The biorepository will capture that diversity,” she said.

And companies are taking notice. Circuit Clinical, which partners with BIG, develops software products that are driving enrollment in clinical trials. It was among the first to take advantage of the UB Biorepository.

“The UB Biorepository is a key asset in positioning UB and Western New York at the heart of precision medicine research opportunities – both academic and commercial – in the years ahead,” said Irfan Khan, founder and CEO of Circuit Clinical. “This facility will enable biomedical companies to enlist UB and Circuit with strong confidence that any biostorage needs for their clinical projects are well within UB's state-of-the-art capabilities.”

The UB Biorepository program is obtaining College of American Pathologist accreditation, and it implements Good Laboratory Practice and is Good Clinical Practice certified. It manages biosamples suitable for use in any downstream applications with academic, pharmaceutical and biotechnology partners.

Researchers in academic and research institutions or industry who are interested in more information about the UB Biorepository should go to http://www.buffalo.edu/genomics/assets-that-work-for-you/biorepository.html.