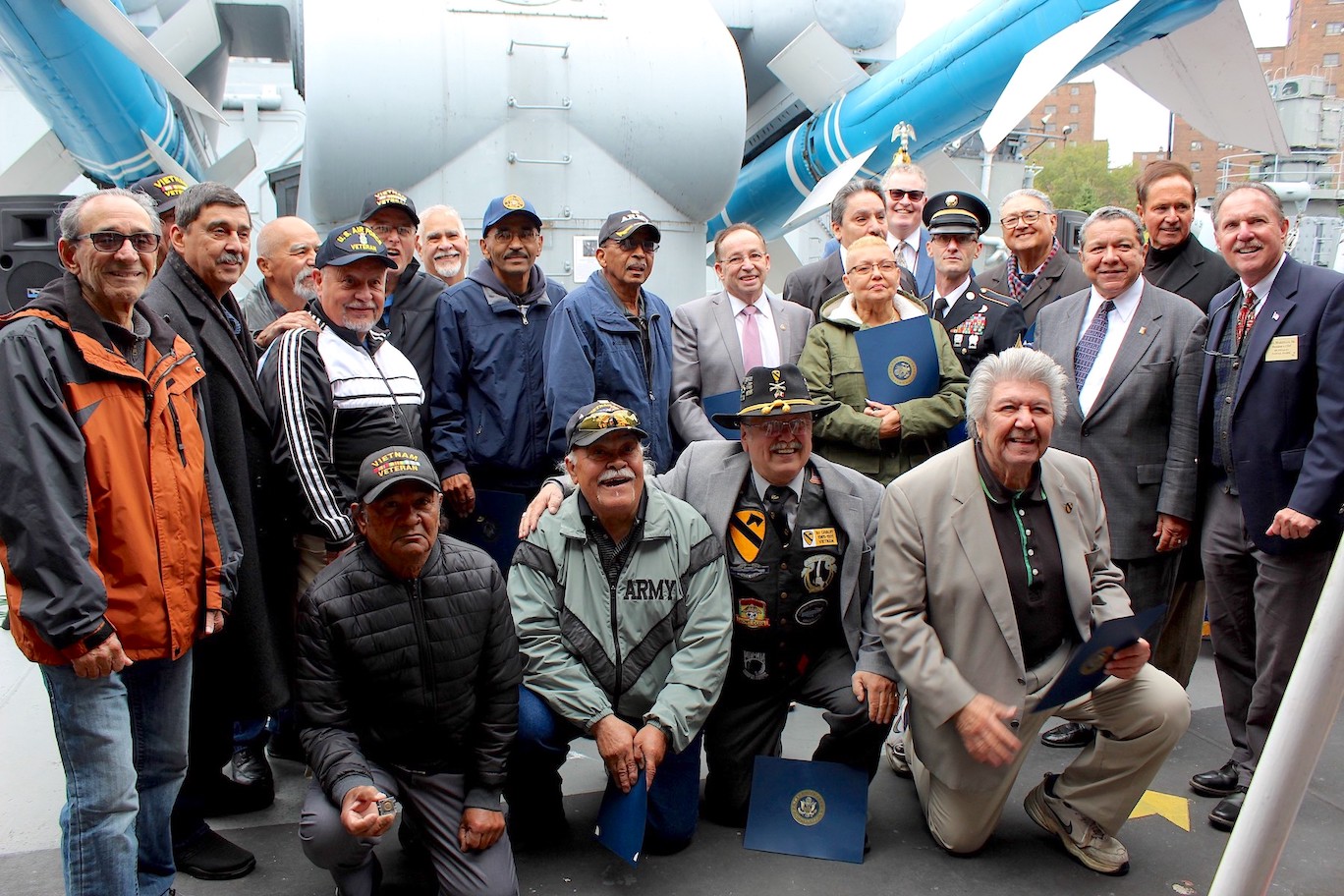 Hispanic Heritage Council of WNY President Casimiro D. Rodriguez Sr. said, "As we celebrate the many contributions of Hispanic Americans during Hispanic Heritage Month, we are honored to pause and reflect on the sacrifice that many of our military men and women gave to our nation during the era of the Vietnam War. Today we join our community in thanking them for their service."

Buffalo & Erie County Naval & Military Park President and CEO Paul J. Marzello Sr. said, “As the region’s premier destination to honor WNY Veterans, the Buffalo & Erie County Naval & Military Park is privileged to host the celebration of WNY Hispanic Americans who served honorably during the Vietnam War era. Although many of these veterans were treated with disdain and a lack of appreciation for their sacrifices when they returned home nearly 50 years ago, today we shout out a long overdue ‘Thank you’ for your service.”

At the event Congressman Brian Higgins honored over 60 local Hispanic veterans who served during the Vietnam War era, presenting each with a commemorative Vietnam War anniversary pin.

The America Vietnam War Commemoration was authorized by Congress, established under the secretary of defense, and launched to commemorate the 50th anniversary of the Vietnam War. Both Higgins and the Buffalo Naval Park are registered commemorative partners.

The commemoration pledges to honor U.S. veterans who served on active duty in the Armed Forces at between Nov. 1, 1955, and May 15, 1975. Under the program, Vietnam veterans nationwide receive thanks through events held between Memorial Day and Veterans Day (through 2025), which include the presentation of Vietnam War Commemoration pins.

“This event, that recognizes the incredible service of dozens of Western New York veterans, provides just a small window into the great contributions of Hispanic American veterans across the nation and throughout history,” Higgins said. “It is an honor to stand among these fine veterans, a privilege to share their stories and celebrate their service.”

Buffalo Common Council Majority Leader David Rivera added, “I am very grateful to our Hispanic veterans for their service, especially when you consider they historically have not received the same level of recognition as other veterans. But today is about continuing the effort to properly honor Hispanic veterans. I thank Hispanic Heritage Council of Western New York, the Buffalo & Erie County Naval & Military Park, and Congressman Higgins for their efforts in bringing the Hispanic Veteran story to light.”

John Anthony Acevedo grew up in Buffalo in a family with a deep commitment to military service including relatives who served in the “Borinqueneers” unit in World War II and Korea, and others who served in Vietnam and continue to serve today. Inspired by his family’s commitment to national service, in 1989 John enlisted in the U.S. Army. He was assigned as a medic with the 299th Engineer Battalion. He quickly rose through the ranks to the position of sergeant first class with oversight responsibility of 120 other medics, earning him the nickname “Doc.”

SFC Acevedo participated in five tours of duty in difficult and dangerous assignments including missions in Egypt, Afghanistan, South Korea, Saudi Arabia and Iraq. During Operation Iraqi Freedom, his unit came under fire. “Doc” grabbed his gear and medic bag and ran toward the explosion. He simultaneously searched for casualties while engaging in the counterattack, putting his own life in jeopardy. These actions earned him the Bronze Star.

Following 26 years with the Army, he retired from military service in 2015 with a total of 28 medals and ribbons, including the Bronze Star, Meritorious Service Medal, Joint Service Commendation Medal and the prestigious Combat Medical Badge. Today, he continues caring for men and women who served as a member of the nursing team at the Buffalo VA Hospital and through his participation in many veteran organizations.

Higgins recognized Acevedo’s commitment to his country and community with a special extension of remarks entered into the Congressional Record.

“VA Western New York Healthcare System is proud to have John Acevedo as a dedicated and committed VA employee who has served his country for 26 years in the U.S. Army,” stated Michael Swartz, executive director, VA Western New York Healthcare System. “He continues to serve veterans as a licensed practical nurse on our 9-D inpatient care unit. We are fortunate to have John represent our VA mission as we also celebrate National Hispanic Heritage Month.”

Hector Nava grew up in Mexico and earned his medical degree there in 1967. His health care career path took him to the U.S., where he chose to utilize his medical training in the Army. He spent a year as a general medical officer in El Paso, Texas, before leaving to serve as a captain battalion surgeon in Vietnam. For his commendable work saving the lives of American soldiers in combat, Nava earned the Bronze Star.

Upon returning stateside, he worked in hospitals in Niagara Falls and Buffalo before joining the team at Roswell Park Comprehensive Cancer Center. During his tenure, Nava secured seven federal research grants and has been published in over 100 journals. He is credited as the first clinician to publish work demonstrating the importance of total colonoscopy in patients with colorectal cancer and pioneered a successful treatment for a condition that can lead to esophageal cancer. For his work as a surgical oncologist, he received numerous recognitions including being named to the Best Doctors in America List and a lifetime achievement award from the American College of Surgeons. He was recognized by Higgins for his tireless pursuit of medical solutions and lasting impact on the health care field.

Medal Presentation to Family of Gabriel A. Rodriguez

Born in Puerto Rico in 1948 to parents Petra and Primitivo Rodriguez, Gabriel “Gabe” Rodriguez was the fifth of 13 children. The family moved to Buffalo in search of a better life, which his father was able to provide through work at Bethlehem Steel. Gabe left school early and found work to help support the family at the Ford plant, before being called to serve in the Army.

Gabe served in the 25th Infantry Division during the Vietnam War, exposed the horrors that come with battle. Upon his discharge, he returned to work at Ford and continued with service to his country as a member of the New York State National Guard, all the while suffering from severe post-traumatic stress disorder (PTSD). On Nov. 20, 1981, Gabe passed away, Higgins’ camp said, “seeking peace from the trauma associated with war.”

In 1986, a group of local Hispanic-American veterans chartered the Gabriel A. Rodriguez American Legion Post No. 1928, creating a place where those who served could seek comfort and community.

Hispanic Heritage Council of WNY President Casimiro Rodriguez recently asked Higgins’ office for assistance with obtaining a full set of the medals his brother earned while serving during the Vietnam War. During the Hispanic Heritage Month ceremony, Higgins presented the following medals to the Rodriguez family, on behalf of a grateful nation:

•Vietnam Service Medal: For service in Vietnam, Thailand, Laos, or Cambodia from July 1965 through March 1973 and the evacuation of Saigon from 29-30 April 1975;

•Sharpshooter Badge with Rifle Bar: Awarded for completion of a weapons qualification course and skill in the use of a rifle.

Gabe was also entitled to the Republic of Vietnam Campaign Ribbon with Device (1960), awarded to armed forces personnel by the Government of the Republic of Vietnam, for six months of service in South Vietnam during the period March 1, 1961, to March 28, 1973. And Higgins provided a flag that few over the U.S. Capitol Building in Washington, D.C., in recognition of the supreme sacrifices Gabe made in service to this country.

The event concluded with remarks from Rivera, an Air Force veteran and member of the Latino Veterans Association, on “The Borinqueneers.”

The Borinqueneer division of the Army was born shortly after U.S. acquisition of Puerto Rico and rededicated as the 65th Infantry Regiment. The division, comprised of brave Hispanic American soldiers, remained segregated throughout World War I, World War II and most of the Korean War, even after President Harry Truman ordered the desegregation of the armed forces. The soldiers of the 65th Regiment were highly decorated, earning one Medal of Honor, nine Distinguished Service Crosses, 250 Silver Stars, over 600 Bronze Stars, and more than 2,700 Purple Hearts. Members of the Hispanic Heritage Council of WNY and Higgins played an essential role is advocating for the passage of legislation awarding the Congressional Gold Medal to the 65th Infantry Regiment, paying tribute to the Borinqueneers.