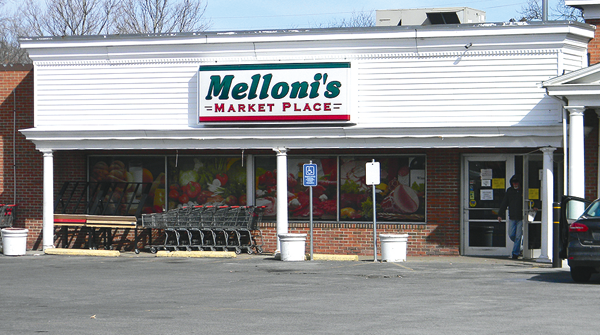 The Griffon will soon take over the former Melloni's Market Place in Youngstown. (File photo)

Griffon to take over former supermarket

The Griffon House owners on Thursday officially declared they are coming to Youngstown and plan to move into the old grocery store that left the village with an empty storefront in 2018. The only questions remaining is how much will be invested and when.

After declaring their intentions to the Village of Youngstown Board of Trustees, Ken Scibetta and Ed Webster spoke to The Sentinel.

“We haven’t had any pushback, (but) obviously we know, the Village of Youngstown is going to be a little upset that we’re not a grocery store,” Scibetta said. “That doesn’t mean that down the road we won’t carry grocery items to support the locals. Me and Ed talked about possibly putting in a shelf or two, and just carrying some simple grocery items, and our guests will dictate what they’re looking for. We’ll sell them at cost.”

The restaurateurs now own five locations, including the Griffon Gastropub in Niagara Falls, the Griffon House in Lewiston, and the unnamed Youngstown location. They are known for casual dining and, maybe more importantly, a good beer menu.

At the Board of Trustees meeting, they announced one of the options they have in mind for the Youngstown location is a brewery that would supply all of their restaurants.

“The concept has changed multiple times over the past few months,” Scibetta said. “We will take on as much as we can from the community, from input, but (basically) we want it to be a fun family restaurant.”

Scibetta said he is still undecided as to whether he wants a full-production eatery that employs 40 people, or a smaller restaurant and brewery that would employ about 15 people. He noted the Griffon restaurants, in total, employ 200, which he said he’s very proud of.

When the Youngstown location will open also depends on how big the owners decide to go.

“The dream would be the end of next summer, once we sign on and we get the grant. We’ll probably be going to get open a little faster, but, depending on whether we decide we’re opening a full-production, we’re probably looking at September, October,” Webster said.

Mayor Raleigh Reynolds indicated he was pleased with the plans and asked Webster and Scibetta to keep him updated.

“I’ve heard a lot of good things about you,” he told them. “If there’s anything we can do to help, just let us know.”