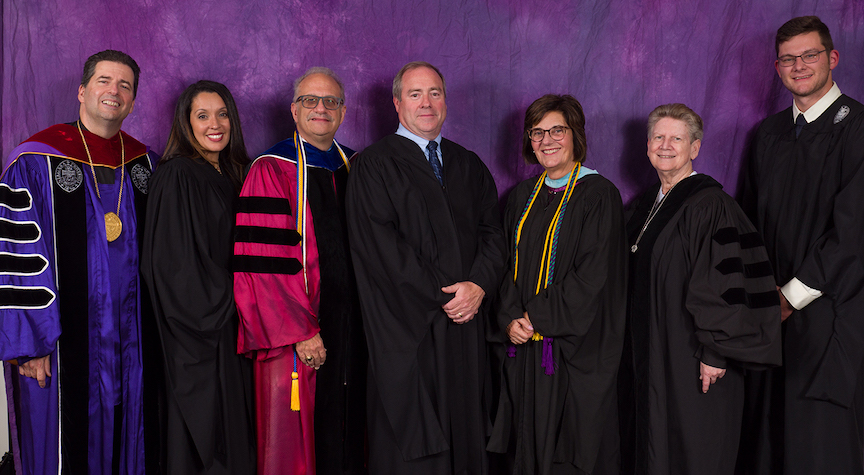 As part of its celebration of Vincentian Heritage Week, Niagara University recognized the extraordinary contributions of six individuals who have lived the mission of St. Vincent de Paul at its annual convocation on Thursday.

McNeil received an honorary doctor of humane letters for her service and scholarship in the Vincentian tradition. For more than 50 years, McNeil has ministered to abused and neglected children, pregnant and parenting adolescents, and immigrants and refugees in a variety of clinical social work roles. She has also served as provincial archivist for the Daughters of Charity Province of Emmitsburg and on the advisory committee to publish the multi-volume opus “Elizabeth Bayley Seton Collected Writings.” She has been an active member of the Vincentian Studies Institute for more than 30 years, currently serving on the editorial board of Vincentian Heritage for the institute, and is an adjunct faculty member in Catholic studies in DePaul’s College of Liberal Arts and Sciences. McNeil’s articles on the Vincentian and Setonian tradition have been widely published, and she has conducted workshops and retreats around the world.

Keynote speaker Fuentes was presented with the Rev. Thomas Augustine Judge, C.M. Award. Fuentes has worked in Catholic ministry for more 15 years, focusing on young adults who are starving spiritually to assist them in finding spiritual enlightenment through conversations in everyday settings, including her home. Fuentes helps people find a way to be closer with God by sharing her everyday stories focused on the love of Christ and the gift of religion with the world. Working with the acronym YES – Your Everyday Story – she has created a spiritual communication model that allows individuals to see one another and find familiar moments that are the cornerstones of intimacy and gratitude.

Daly is the recipient of the Vincentian Mission Award for his service to the Daughters of Charity of St. Vincent de Paul in Ethiopia. While there, he helped develop plans for a teaching plantation and a solar energy project to power computers at a school for poor children, and conducted a financial analysis for a commercial building that would provide funds for a women’s training institute. He also developed marketing materials for several existing programs and assisted in grant writing. Daly plans to continue this work by enlisting NU students in helping the sisters develop sustainable operations and continue their efforts to assist the poor and disadvantaged in Ethiopia.

Whalen was honored with the St. Vincent De Paul Medal for his work with and advocacy for people with disabilities. Among the many programs he has established is Disability Awareness Training. This program, which has been offered throughout the country, is designed to sensitize and educate first-responders and others on all aspects of disabilities. Whalen also accepted an invitation to the White House for an historic MOU signing between FEMA and the National Disability Rights Network; is on the advisory council of the National Center on Criminal Justice and Disability; and provided written testimony to the Senate Hearing on “Law Enforcement Responses to Disabled Americans: Promising Approaches for Protecting Public Safety.”

Wrobel was presented with the St. Louise De Marillac Award for her commitment to service to her hometown of Niagara Falls. Wrobel leads the institute with a focus on its four pillars: early childhood, community outreach, health and wellness, and housing. She has successfully established community partnerships that have positively impacted those areas. Wrobel also serves in a number of leadership roles within the community, including vice president of the board of directors for Empower WNY, and on the boards of directors for Leadership Niagara, St. Peter R.C. School and the Wilson Center. She is a member of the advisory task force for the United Way of Greater Niagara and of the executive committee for Help Me Grow Western New York.

Rhue received the Frédéric Ozanam Medal for his service to the Niagara Region. The Lewiston native has dedicated his time and talent to service with the United Way of Greater Niagara, first as an intern, then as a member of its board. He currently serves as treasurer. His efforts have helped to build the Niagara community and make it a better environment.