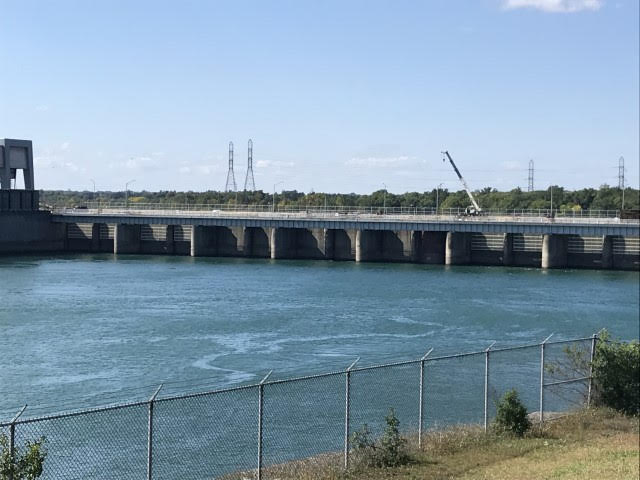 Trash racks are large grates between the river water in the project’s forebay and the Robert Moses Niagara Power Plant that filter out debris.

The newly designed trash racks will be easier to maneuver and will streamline plant operations.

Each of the project’s 13 generating units has six (25-foot-by-10-foot) trash racks installed – two upper, two middle and two lower. They catch dislodged tree trunks, large pieces of metal and other river debris that might otherwise damage the facility’s turbines. Trash racks also capture leaves and other vegetation that are not a danger to turbines. In summertime, when large amounts of waterborne vegetation flow down the Niagara River, vegetation can build up in the racks to a degree that restricts water flow and limits the plant’s power output.

To maintain smooth operations in summertime, NYPA removes the upper and middle racks, leaving the lower racks in place to catch the largest, most dangerous debris, which moves along the river bottom. In the past, removal and storage has taken a day-and-a-half per unit for all 13 units, amounting to more than two weeks for the whole plant. When NYPA engineers and mechanical maintenance staff started preparing to replace Niagara’s aging trash racks back in 2014, a design review identified opportunities to simplify removal, cleaning and replacement.

The NYPA team collaborated on a redesign that would slash the time needed for maintenance. With its new design, NYPA can remove the racks for three or four units in a single day.

“This in-house equipment redesign significantly reduces the time, manpower and money needed to conduct routine but critical maintenance,” NYPA President and CEO Gil C. Quiniones said. “The work on this project is a testament to our employees’ commitment to asset management, and supports Gov. Andrew M. Cuomo’s clean energy agenda by ensuring the safe, efficient operation of the Niagara Power Project – one of New York’s cleanest power generators.”

Installation of the new trash racks began in 2018 and is expected to be completed next month.

NYPA is the largest state public power organization in the nation, operating 16 generating facilities and more than 1,400 circuit‑miles of transmission lines. More than 70% of the electricity NYPA produces is clean renewable hydropower. For more information, visit www.nypa.gov.