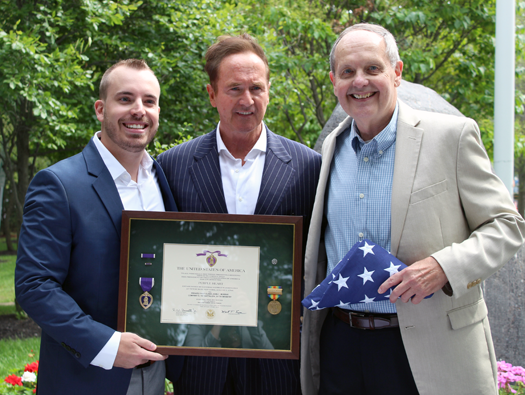 On the eve of the 101st anniversary of the day U.S. Army veteran John C. Murray was wounded in action, Congressman Brian Higgins presented his family with a Purple Heart and other military medals for service during World War I.

Higgins said, “This country is forever indebted to Private First Class Murray, who, with courage and honor, defended this nation during World War I. His actions and sacrifices over a century ago contributed to upholding the liberty this country was founded on and that which we continue to behold today. We commend the Murray family for seeking out the service medals Private First Class Murray rightfully earned, preserving a lasting family legacy, and we are honored to play a small role in telling his story.”

Murray was born in New York City on Jan. 27, 1891. He family moved to Buffalo and he grew up on Norwood Avenue until he was drafted at age 27 to serve in World War I. On April 7, 1918, Murray was assigned to the war’s western front and participated in several major battles in France, including the battles of Champagne-Marne, Meuse-Argonne and Oise-Aisne.

Murray served as a PFC in Company D, 1st Battalion, of the 307th Infantry Division of the Army. While fighting in a particularly volatile area near the Vesle River in France, on Sept. 14, 1918, Murray suffered injuries as a result of exposure to toxic chemicals during a mustard gas attack. This ultimately removed Murray from frontline action.

Chemical weapons were frequently employed by both sides during World War I. Mustard gas was known as the “king of battle gases” for its lethal nature and debilitating effects and was the most widely used chemical weapon during the first World War. The gas creates painful irritation of the eyes, temporary blindness, and blistering skin. The damage the gas triggers in the lungs also frequently caused health problems after the war, including tuberculosis and various forms of cancer.

Murray was honorably discharged on May 9, 1919. He was awarded the Lady Columbia Wound Certificate – a predecessor to the modern-day Purple Heart medal – for the injuries sustained while serving during World War I.

Murray went on to marry his wife, Cecilia, and together they grew their family in Buffalo. As a result of his previously awarded Lady Colombia Wound Certificate, Murray was eligible for the Purple Heart at its inception in 1932. However, at the height of the Great Depression, Murray decided to focus on providing for his family instead of what he referred to as “patting himself on the back.”

Sadly, he passed away on Nov. 17, 1981 without ever receiving his Purple Heart.

However, his grandson, also named John Murray, and great-grandson Sean Murray, made it their mission to make sure this WWI hero’s legacy was cemented with the Purple Heart. They enlisted the help of their friend, Jim Otwell, an Iraq War Army veteran and, together, reached out to Higgins’ office to help make that happen.During a ceremony in front of the Purple Heart monument at the Buffalo & Erie County Naval and Military Park, Higgins, along with U.S. Army Buffalo Recruiting Company Cmdr. Capt. Randy Warren, presented Murray’s family with the following:

World War I was one of the deadliest battles of all time. Approximately 116,708 U.S. military personnel died and over 204,000 were wounded.

On Aug. 7, 1782, Gen. George Washington created the Badge of Military Merit, a piece of heart-shaped purple cloth embroidered with the word “merit” in white thread, presented to those engaging in extraordinary meritorious actions. Washington intended the award to be permanent, but it was only presented to a few soldiers who served during the Revolutionary War. During WWI, members of the military who were wounded in action were awarded the Lady Columbia Wound Certificate. At the time, Lady Columbia was seen as the personification of America, rooted in connection to explorer Christopher Columbus, and inspiring the names for this nation’s capital, the District of Columbia, as well as Columbia University.

The Purple Heart medal was later implemented in its current form in 1932 on President Washington’s 200th birthday by Army Gen. Douglas MacArthur. It was officially developed into today’s version by 1944. The Purple Heart is presented to service members of the U.S. armed forces who have been wounded or killed as a direct result of enemy action. It is the oldest badge still awarded to the U.S. military today.