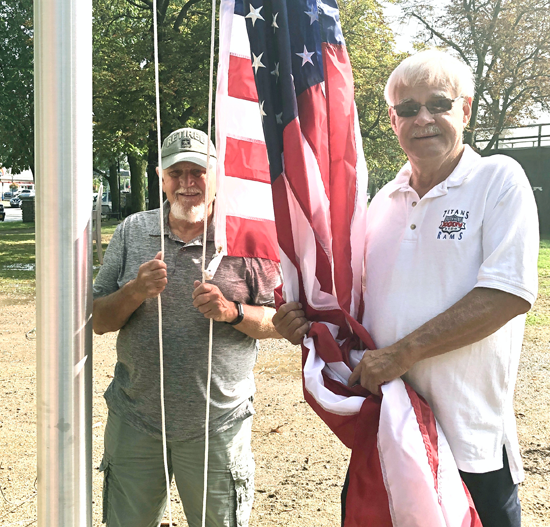 The "Circle of Honor" flagpoles were just installed this past week. Bill Justyk, right, VFW commander, and Vince Canosa, quartermaster, hoisted the American flag for the first time. The second flagpole will display the MIA/POW flag.

Significant progress will be seen this month at the construction site of the new Lewiston “Circle of Honor” at Academy Park.

“Everything is on schedule and we’re looking forward to seeing the large engraved granite pieces in a few days,” said Bill Justyk, commander of the VFW Downriver Post No. 7487. “The under-the-lights unveiling will be held on Veterans Day, Nov. 11.”

The granite that will be used in the memorial was quarried in Minnesota and fabricated in Illinois. It is currently scheduled to arrive in Lewiston on early Wednesday morning. VFW officials are hoping to arrange for a police escort from the Thruway to Academy Park when the stone arrives by truck.

The new flagpoles were raised and the cannon at the park was refurbished during the past week. Ian Preston of Buffalo Mobile Blasting volunteered his service to sand and glass-blast the cannon to its original condition from the turn of the last century.

Historical research has revealed interesting facts about the cannon, except no one knows the circumstances on how or when it arrived in Lewiston. The cannon has been located at Academy Park for untold decades.

Lewiston’s cannon may look small, but it packed a punch. One of the rarest U.S. Army artillery pieces, the breech-loading M1890 3.6-inch mortar cannon, known as a “bag gun,” was produced in 1901 at the Watervliet (New York) Arsenal. As of 2019, Watervliet is the oldest continuously active arsenal in the U.S., founded in 1813 to support the War of 1812.

Lewiston's cannon is No. 73 of a total of 78 that were produced. Only 22 are still known to exist. Experts say it’s amazing any still exist, since most of the cannons were melted down as part of the World War II scrap drives in a response to critical metal shortages.

Lewiston’s cannon was inspected by Mr. Farley, noted as “J.P.F.” on the barrel. The barrel weighs 244 pounds and the carriage is 300 pounds. It could hurl a 20-pound explosive shell, or a time-fused shrapnel shell, nearly two miles. These mortars were mainly used for training, but saw action in Cuba during the Spanish American War and later in the Philippine-American War of 1899-1902. They were deemed obsolete in 1919.

“Fortunately, when we moved the memorial to the corner of Center and Portage, the cannon was already there. That gave us the opportunity to incorporate it within the memorial site, and now it will get the care and attention it desperately needed,” said Vince Canosa, quartermaster of the VFW. “It’s a perfect complement to the whole presentation. With the restoration, it looks brand-new.”

The memorial has been made possible through generous private donations and Greenway support from the Town of Lewiston. The Village of Lewiston has donated the park space and gas for the elevated eternal flame.

More than 550 names of local veterans will be featured when the memorial is unveiled on Nov. 11. The memorial will have space to accommodate future names to be added. 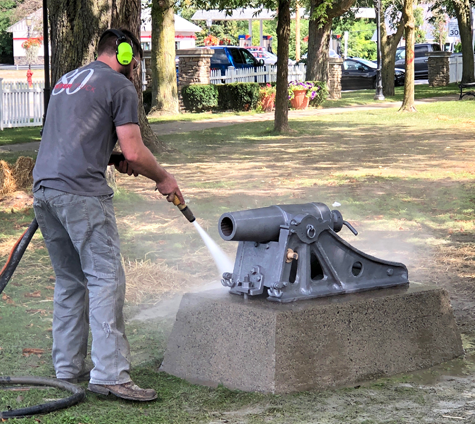 The rare historic cannon at Academy Park was refurbished this past week as the Lewiston VFW oversees the completion of the new “Circle of Honor” memorial. Ian Preston of Buffalo Mobile Blasting volunteered his service to sand and glass-blast the cannon to its original condition from the turn of the last century.