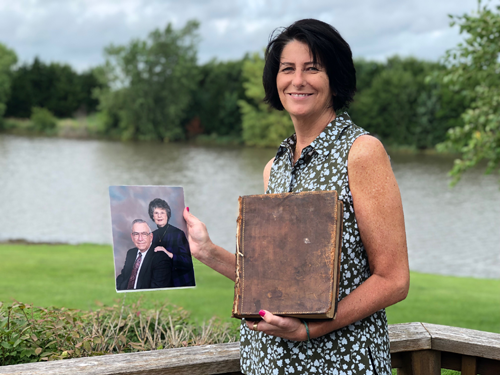 On July 16, Historical Association of Lewiston Executive Director Patricia Mahoney and I received an email from Village of Lewiston Mayor Anne Welch. The mayor asked if we could assist a woman named Jane Brogan from York, Nebraska. Jane’s mother was an avid collector of books that she would collect from library sales around the state. Jane came across an old Bible that had personal family history handwritten inside. She traced the family name back to Lewiston, New York. Jane wanted to know if the Bible had any connection to her own family before disposing of the Bible due to its poor condition.

As the Historical Association’s curator, I contacted Jane and asked if she could give me the family name in the Bible and also send me photographs of the handwritten notes on each page. Jane replied that the name was Benjamin Barton and sent me three photos of the notes.

Benjamin Barton was from a prominent Lewiston family and he was one of Lewiston’s founders. To my amazement, the Bible was clearly signed by Barton in November 1813. This date was one month before the burning of Lewiston by the British on Dec. 19, 1813. The other photos showed the Barton family’s birth, marriage, and death records.

I forwarded the photos from the inside pages of the Bible to Peter Barton Hutt of Washington, D.C. Peter is a direct descendant of Benjamin Barton and a regular contributor of Barton family heirlooms to the Lewiston Museum. Peter authenticated the signature and all the family notes as being correct.

I spent the next week going through everything I could find on the Barton decedents, including a 1993 family reunion list complete with names and addresses. The Barton family members were from all over the country, but nothing matched up to Jane’s family tree. The Bible did not have any connection to Jane, and was likely just a purchase her mother had made at one of the many book sales she attended.

I realized the Lewiston Museum should try to acquire this Bible and bring it back home, no matter the condition. Jane agreed in its importance to Lewiston’s history and also wanted it to come home, as well.

Due to the book’s fragile nature, we worked with Candyce Horne at the Lewiston Post Office to obtain a secure box and packing material for its travel. We also tracked the shipment both ways to ensure safe delivery. Within a few days, the Bible arrived safely to the Lewiston Museum.

Along with the Rufus Spaulding spoon donated to the museum by Bob and Anne Welch, the acquisition of the Barton family Bible secures the second known personal item to survive the burning of Lewiston over 200 years ago.

Museum visitors will be able to view both artifacts on display at 469 Plain St. Call 716-754-4214 to schedule a personal viewing or visit during our open house during The Lewiston Tour of Homes on Dec. 7-8.