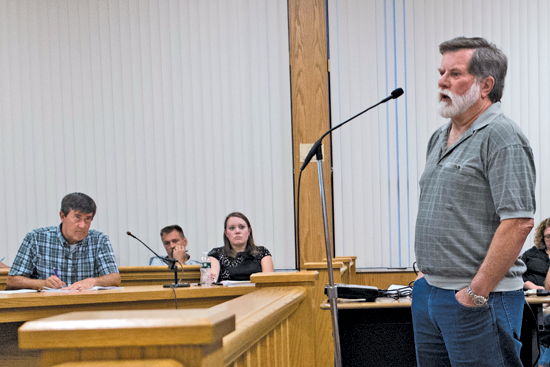 Islanders at an informational meeting about the Southpointe development project echoed the voices from 20 years ago when they raised similar concerns about the project’s potential impact on the environment and traffic.

Town hall’s courtroom was filled for a nearly two-hour meeting Monday as developers described in detail a 284-acre project that would create a hamlet for older residents of about 1,000 people.

Town Supervisor Nathan McMurray said the meeting took place because, “I don’t want people to say we’re hiding it. We’re trying to make it as open as possible.”

Doug Scheid, architect for the project pursued by Long Island developer Harold Schertz, described the changes of Southpointe 2019 from Southpointe of old. The environmental and traffic concerns from the 1990s when the Southpointe development was first proposed resurfaced, however. Many of the speakers echoed residents such as Jennifer Szumla, who lives near the proposed development off Staley Road and Love roads. “That to me is a big development,” she said, calling it one not in line with the town’s new comprehensive plan.

The board 20 years ago approved a previous Southpointe development in the same area bounded by Love and Staley roads, but it didn’t get off the ground as designed. The new design by Scheid leaves all but 11% of the space green, he said, a statistic many in the audience looked at dubiously.

Scheid lived on the Island from 1989 to 2017 before becoming a resident of Florida. “I like Grand Island,” he said. “Honestly, I designed (Southpointe). I believe this project is in alignment with the comprehensive plan and Grand Island development.”

The development is smaller in scale than the one approved in 1997.

McMurray was open about where he stood, mentioning his environmental record as the developers sat to his right, but he supported a fair hearing for all involved, saying “I also went through my history of fighting for green space on Grand Island. I don’t think anyone’s ever had a history like that on Grand Island to fight for green space, but you know, I’m going to be as open and transparent as I can,” he said.

“They might have some legitimate concerns,” McMurray said of the developers. “I’m not going to let them build whatever they want. And I’ve been through hell with a lot of these projects. With Tonawanda Coke, people threatened me. ... I’ve gotta stand with what my values are. My values are green space preservation.

“But I understand the commerce argument they have and I’m respectful of their rights, but at the same time I’m not going to let them do whatever they want.”

Many of the people who spoke against the project went to the microphone and prefaced their comments with descriptions of how long they’ve lived on the Island. In light of that, Scheid was asked, can a developer from Long Island get a fair shake?

Scheid said, “I think that as long as the town acts in accordance with development rules, yes. The town has been very fair.”

“I hated that,” McMurray said of the public’s remarks in that regard. “And some of the comments I thought were troubling to me. And I just said to one of the people ... I went to them, and I said, This is not a foreign country. This is part of the United States. And people have rights no matter where they’re from, and I don’t like some of those comments. I thought they were wrong. ... The fact that the guy’s from Long Island is not the reason to oppose this. And the fact that his name is not something you’re familiar with is not the reason to oppose this.”

Scheid was asked about a process that a major property owner or developer has to go through that is essentially a repeat of the contentious Southpointe process from the 1990s.

It’s OK, “As long as people are treated fairly,” Scheid said. “There’s rules, there’s development rules, and as long as the developer can follow the rules, and the rules are enforced properly by the town officials, I think it’s a fair system. Input from the public is important as long as it’s taken into context.

“So, being in the development business for a long, long time here in Western New York, nobody wants development in their backyard.” 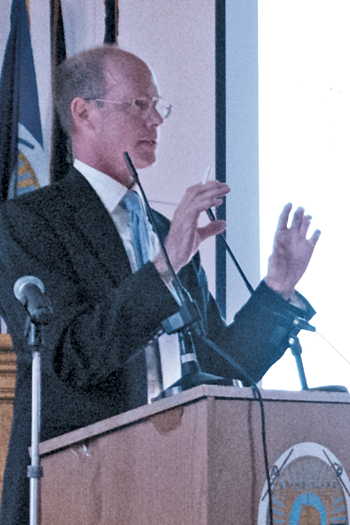 Architect Doug Scheid, designer of the Southpointe development, speaks to a capacity crowd in Grand Island Town Hall during an informational meeting Monday.