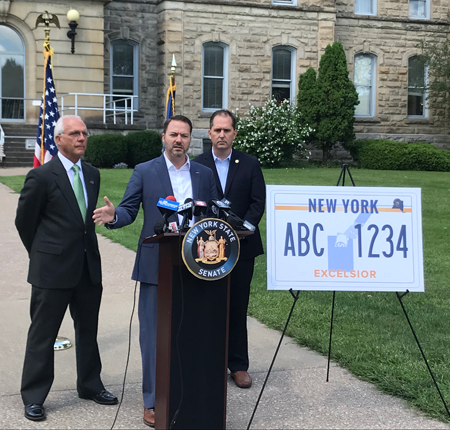 “Once again, Gov. Cuomo and his out-of-touch administration are looking for a way to bolster the state’s budget at the expense of New York’s hard-working taxpayers,” Ortt said. “If new license plates are necessary for cashless tolling, as outlined by the governor, then the state should be providing new license plates to every driver in our state free of charge. It is not the burden of the drivers of our state to refund the incompetence and inability of those charged with implementing cashless tolling.”

Ortt’s bill, S.6663, would require the DMV commissioner to waive the $25 fee for any license plate mandated for replacement by the state due to a design change.

Ortt’s press release said, “As one of the least tax-friendly states in the entire country, the governor’s proposal to charge $25 to $45 for every new vehicle registered with a plate 10 or more years old comes as no surprise. Ortt noted that for years, New York state has been nickel and diming its residents, which is why he believes it continually ranks near the top of the list when it comes to out-migration. He also noted that Thruway tolls were supposed to expire in 1996 when the bonds to pay for the construction were paid off.”

“Here we go again – governance at its worst. This time, Gov. Cuomo is creating a $350 million windfall on the backs of 14 million registered NYS drivers,” Jastrzemski said.

GOP Assemblyman Mike Norris said, “Asking taxpayers to pay $25 for new a license plate, which will essentially serve as a device that makes it easier for NYS to collect a toll, is an egregious money grab and terrible excuse to reach into our pockets, even for New York state.” “This is a perfect demonstration, along with the previous license plate debacle, of the incompetence and ‘tax and spend’ mentally of state government.”

Republican Assemblyman Angelo J. Morinello said, “Should new license plates be required because of the state’s electronic toll system, the burden of an unfunded mandate should not be placed on the taxpayers of New York state.”

“New Yorkers are smart. No matter how the governor and his press team try to spin this story, we will see this for what it is: a massive cash grab,” Ortt said.