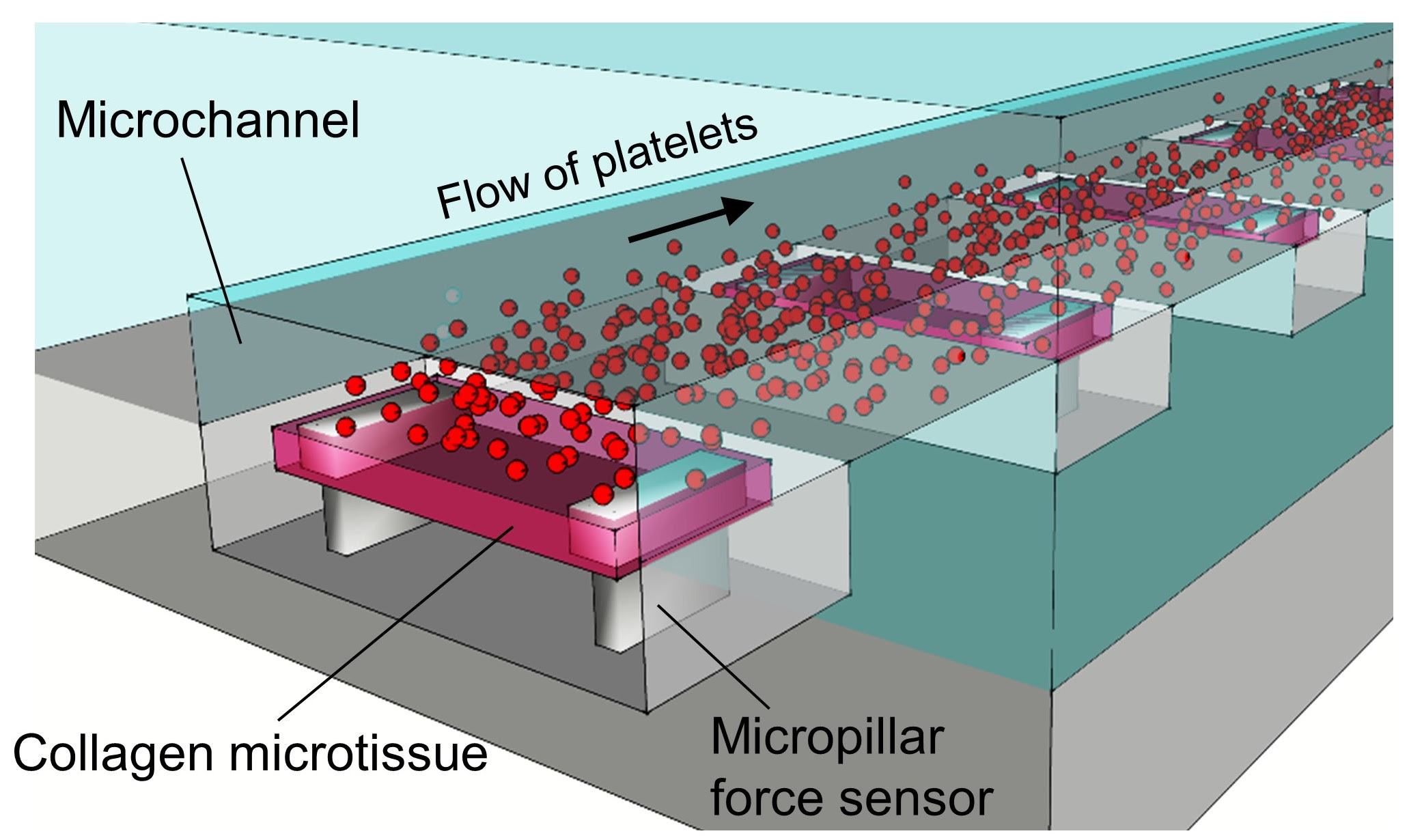 This diagram demonstrates how the engineered tissue model works to mimic the clotting upon blood vessel injury. Platelets adhere to the collagen microtissue that represents the collagen layer in the blood vessel. The micropillars that support the microtissue sense the stiffness of the microclots that form when exposed to different flow rates, which mimic venous or arterial flow in the body.​ (Credit: Zhao, Neelamegham, et al., from their paper in Nature Communications)

How do clots become firm in the presence of blood flow? A new engineered tissue model has answers

Model will help with presurgical planning and with understanding hereditary disorders, like von Willebrand disease

Blood clotting is one of the most critical, protective processes in human physiology. When something goes wrong with clotting, either because there is too much clotting, leading to a stroke, or not enough, leading to internal bleeding, the outcome can be catastrophic.

Now, University at Buffalo researchers have established an in vitro model of this process that will help clinicians improve presurgical planning and care for patients with certain bleeding disorders, especially defects in platelets (the blood cells that form clots) and those affecting the patient’s ability to form clots. The work is also providing a picture of what might happen between platelets and blood vessels with unprecedented detail.

Published in May in Nature Communications, the paper reveals how the model the UB bioengineers constructed mimics the complexity of what happens when blood clots at an injury site.

“Blood flow – and the shear stress on the walls of blood vessels – are big factors in the cardiovascular system,” said Ruogang Zhao, Ph.D., corresponding author on the paper and assistant professor in the department of biomedical engineering, a joint department between the School of Engineering and Applied Sciences and the Jacobs School of Medicine and Biomedical Sciences at UB. He collaborated with researchers from other UB departments, including co-corresponding author Sriram Neelamegham, Ph.D., professor of chemical and biological engineering.

Before performing surgery, surgeons need to know a patient’s history with regard to bleeding and the capacity of their blood to clot. Hematologists treating various blood disorders also need to understand how specific treatments will alter the patients’ ability to form clots. Currently, there are devices that can be used in a clinical and home-care setting to help characterize how a patient’s blood clots.

But, Zhao noted, these devices lack the ability to realistically model how clots form and how shear flow affects them, which limits their utility. He explained that shear stress is the result of the force of blood flow against blood vessel walls, similar to the way that water flowing through pipes in a house exerts force and stress on those pipes over time.

“For the past several decades, it’s been known that the shear force along vessel walls affects how platelets adhere to the injury site, but we haven’t known exactly how that affects the clotting process and outcome,” Zhao said. “That’s important, because normal clotting is directly dependent on the stiffness of a clot. If a clot is too soft, it will just wash away. If it’s too stiff, then it can form a thrombus, obstructing blood flow and potentially leading to complications, including stroke and heart attack.”

Maintaining that delicate balance becomes even more challenging in the presence of the sheer force of blood flow.

Zhao said platelets, the clotting cells, are very smart. When there’s no injury, they quietly circulate. But if they are exposed to collagen – meaning there’s been an injury – they activate. They rush to the site, but different blood flow rates can change their activity.

“The innovation of our system is that we can model both flow conditions and the stiffness of the clot, which gives the most realistic picture of what’s happening. No other model can do that,” Zhao said.

The system imitates the dynamic process of how platelets adhere to the injured blood vessel walls and form clots while providing real-time information on the mechanical properties of the clot that has formed. It thereby models both clot formation and clot mechanics during shear flow.

Zhao and his colleagues did this using microfabrication technology, creating mechanical sensing platforms that allow simultaneous control of both the formation of the clot and the clot mechanics, mimicking the stiffening process.

The key innovation of the UB system is the development of flexible micropillars that allow the stiffness of clots to be measured.

“These micropillars support the microcollagen as the platelets adhere to it,” Zhao said. “The micropillars serve as force sensors; they can sense the contraction and stiffness of the microclots. No other system can measure the stiffness of clots and therefore, how soft or stiff they are.”

The model that he and his colleagues developed integrates engineered microchannels that mimic the blood vessel with micropillar force sensors to measure the stiffness of a clot. The system was tested using blood samples from human volunteers.

The UB team has used the device to mimic how clotting occurs in people who have inherited bleeding disorders compared to normal clotting.

The team plans to further validate the clinical utility of the system by testing more samples from patients with diverse clotting disorders.

In addition to Zhao, co-authors in the UB department of biomedical engineering are Zhaowei Chen, Jiankai Lu, Isaac Hsia, Leo Marecki, Eric Marecki and Mohammadnabi Asmani. In addition to Neelamegham, co-authors in the UB department of chemical and biological engineering and the Clinical and Translational Research Center are Changjie Zhang and Xinheng Yu.

Shilpa Jain of the Hemophilia Center of Western New York and the UB department of pediatrics and division of pediatric hematology-oncology in the John R. Oishei Children’s Hospital, is also a co-author.