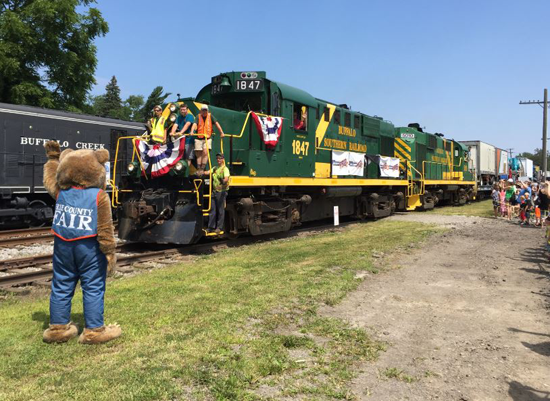 The train, the train!

Erie County Fair rolls on rails: Train to arrive in Hamburg on Wednesday

For generations, the annual arrival of the James E. Strates Shows train has been an anticipated occasion for fairgoers and enthusiasts of Americana. The movement of the colorful freight train filled with wagons and amusement rides into the Village of Hamburg is a signal that opening day of the Erie County Fair is just a week away.

On Wednesday, the Fair Train will arrive at the historic Erie Railroad Depot in Hamburg as the Strates Shows begins its 95th season with the Erie County Fair. The depot is located at the corner of Union and Scott streets. The train will arrive between 11:30 a.m. and Noon.

The train will begin the final leg of its journey to Hamburg using Buffalo Southern Railroad trackage. As the train arrives at the depot, it will be greeted by the Erie County Fair Marching Band, Fair Bear, and Erie County Fair officials. Prior to the train’s arrival, the public may receive a free, limited-edition commemorative “Train Day 2019” button and a bag of Poppin’ Bob kettle corn (while supplies last).

The exclusive relationship between the Erie County Fair and the Strates Shows is considered a historical milestone in the modern amusement industry as it is considered the longest continuous run of any carnival midway in the U.S.

To commemorate “Train Day 2019,” the United States Postal Service will feature a specially designed cancellation mark and two stamps that were recently issued on the 150th anniversary of the completion of the Transcontinental Railroad. The post office will be on site at the Hamburg Depot from 10 a.m. until 2 p.m. selling these stamps as well as cancelling mail using an Erie County Fair Train Depot postmark (while supplies last).