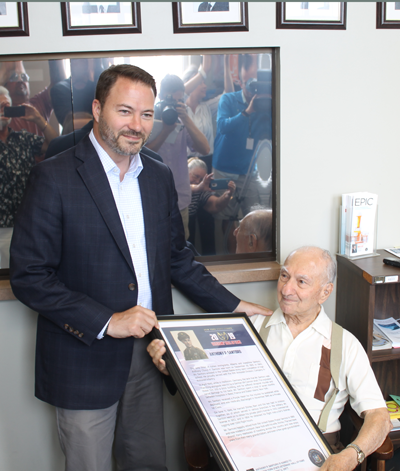 A native of Buffalo, PFC Santoro enlisted into the U.S. Army upon graduating high school in 1944 and proudly served with the 10th Armored Division, Company A – Armored Infantry.

In April of 1945, while on patrol in Heilbronn, Germany, Santoro was severely injured when a German 88-Cannon shell hit the tank he was patrolling alongside. The explosion left him with nerve damage and shrapnel injuries to his back. Santoro would spend the next seven months in hospitals in Betel, France and Staten Island.

In 1945, Santoro was awarded a Purple Heart and was medically discharged as a PFC.

“Because of the sacrifices by young men like PFC Santoro, the world was saved from fascism and tyranny,” Ortt said. “Today, we are afforded the freedoms of life, liberty and the pursuit of happiness because of American heroes like PFC Santoro and the millions of veterans that have served after him. I am honored to celebrate this man, and thank him for his service to our great nation.”