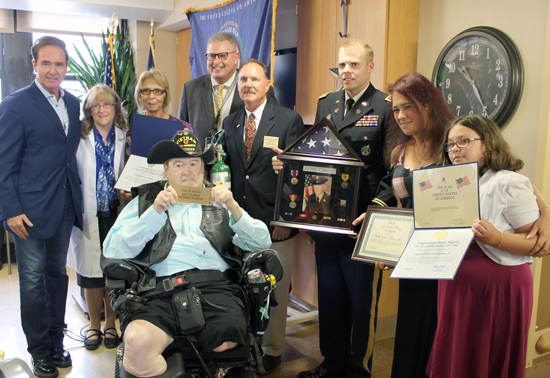 Higgins said, “Sgt. Yockey dedicated his life to serving and protecting the country and community he loves. We are eternally grateful for his commitment and honored to have this opportunity to recognize the great sacrifices he’s made.”

Yockey was born on May 30, 1949, to parents Phillip Glenn Yockey Sr. and Dolores Agnes Snyder. The family, including Yockey’s sister Phyllis, lived in the Black Rock neighborhood of Buffalo.

At the age of 19, Yockey enlisted in the U.S. Army. After completing basic training in 1968, he served two tours of duty in Vietnam, where he worked in the Army’s 37th Transportation Group.

In September of 1971, Yockey’s staff sergeant, Issac Wright, wrote to him saying, “I want to express to you my deep admiration and thanks for the way that you have done your job. … It would be an extreme pleasure to serve with you again in the future.”

Yockey was discharged, fulfilling his initial service commitment, and reenlisted in 1971. He began a new transportation group assignment with the Army in Europe. While serving in Bremerhaven and Frankfurt, Germany, Yockey spent his off-duty time earning his high school degree. He later returned stateside serving in the 505th Signal Company at Fort Huachuca in Arizona before his discharge on Feb. 18, 1979, after nearly 10 years of honorable service.

He returned home to Buffalo without the medals he earned throughout a decade of service.

In 1983, Yockey met his bride-to-be, Charlene, and the two were married on Flag Day in 1986. The couple made their home in the Black Rock neighborhood where he grew up. They had a daughter, Nicole, in 1987. Ten years ago, Nicole had a daughter of her own, Martina Rose.

Yockey worked as a mechanic at City Service Taxi and fixed cars at Gliden Garage on Buffalo’s West Side. In 1989, he became a New York state corrections officer, a position he held for 25 years until his retirement in 2011.

During his service, Yockey was exposed to Agent Orange, an herbicide that was sprayed to remove vegetation providing enemy cover during the Vietnam War, and is now associated with various health conditions. As a result of Agent Orange-induced diabetes, Yockey lost his legs and moved out of his beloved Black Rock neighborhood to the Buffalo VA Hospital’s Willow Lodge, where he has access to direct care.

“We are honored to provide long-term health care needs for SGT Yockey and other Veteran residents of our Buffalo and Batavia community living centers, “ said Michael J. Swartz, executive director. “Our dedicated and caring clinical staff are very knowledgeable in treating our veteran patients who suffer from exposure to toxicants like Agent Orange during their Vietnam service. No other health care system does it better.”

The Yockey family recently reached out to Higgins’ office seeking to pay tribute to the Vietnam veteran.

Yockey’s name will be added to the Wall of Honor at the Buffalo and Erie County Naval Park.

During a ceremony at Willow Lodge, Higgins presented Yockey with the following medals he earned over 50 years ago:

•Good Conduct Medal, with Bronze Clasp and three loops, representing more than nine years of "honorable and faithful” service in the U.S. Army.

•Vietnam Service Medal with two Bronze Service Stars, awarded to members of the U.S. Armed Forces serving in Vietnam between July 1965 and March 1973. One bronze service star is awarded for each campaign.

•Driver and Mechanic Badge, presented to drivers, mechanics and equipment operators demonstrating a high degree of skill in operation and maintenance of motor vehicles.

•Yockey also received the Republic of Vietnam Campaign Ribbon with Device, which recognizes members of allied forces who served in the Vietnam War for a period of at least six months or who were wounded, captured or killed in action. The "1960 Bar" device is given with the medal to indicate the years the war was fought.

Higgins also presented Yockey with the Vietnam Veteran Lapel Pin. Featured on the pin is:

Higgins office also helped the Yockey family put together a shadow box that features the medals, as well as a flag provided by Higgins that was flown over the U.S. Capitol.

The America Vietnam War Commemoration was authorized by Congress, established under the secretary of defense, and launched to commemorate the 50th anniversary of the Vietnam War. Higgins registered to be a commemorative partner and said he is committed to honoring Vietnam veterans over the designated anniversary period.