Prior to the start of Monday’s Village of Lewiston Board meeting, three organizations presented funds for the inclusive playground project. 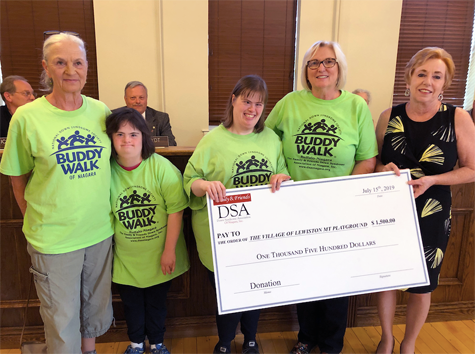 First up was Christine Sirianni, on behalf of The Family & Friends Down Syndrome Association of Niagara Inc., with a check for $1,500 (top). 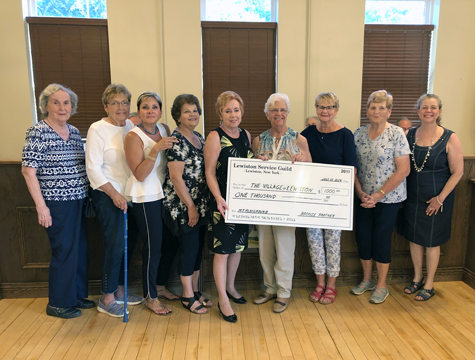 Next was Beverly Hanrahan, representing the 83-year-old Lewiston Service Guild, with a $1,000 donation (middle). 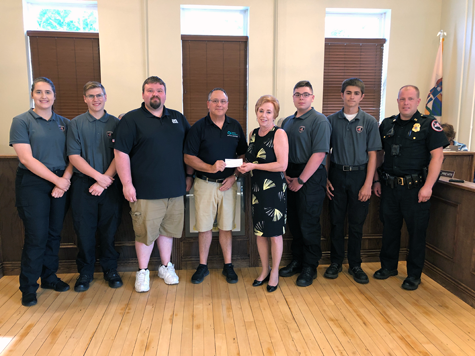 Finally, Bill Schiavitti of Lewiston Redemption Center and Graeme Litt of Technical Solutions joined members of the Lewiston Police Explorers with a contribution from a recent fundraiser (bottom).

Not in attendance was Al Muto, who, earlier in the day, donated $20,000 to the project.

Mayor Anne Welch said the public has donated almost $50,000 toward the roughly $700,000 playground, which is slated to be built this year.

The municipality previously qualified for $200,000 in Greenway funds and is anticipating another $250,000 from the Dormitory Authority of the State of New York.

While the village is still intent on teaming with Mason’s Mission Foundation, the playground will not be named after the Pendleton organization as previously stated.

Welch said a number of donors have significantly contributed to the project, to the extent that they, too, could qualify for naming rights. In addition, she expressed concern regarding the donation process. In particular, when someone donates to Mason’s Mission, all of that money is not necessarily going specifically to the Lewiston park. The foundation is currently working on upward of five inclusive playground projects around Western New York.

More than that, Welch said, “It’s not about naming the park. It’s about having it for the kids. And I have expressed this over and over and over.”

She said Mason’s Mission would be recognized on signage in front of the playground, as will the other donors, when the project is completed.