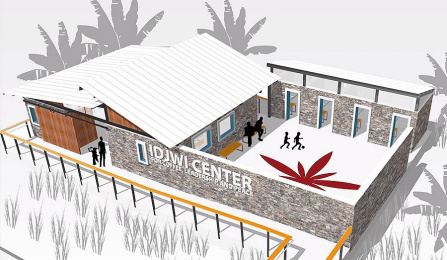 UB's Kory Smith and Stephanie Cramer designed this rendering of a new administration building and cupping lab for CPNCK, a coffee cooperative in eastern Congo.

In Africa, coffee as a pathway to peace

Coffee as a pathway to peace.

It sounds strange. And yet, on an island in the eastern Democratic Republic of the Congo, that’s exactly what’s percolating.

University at Buffalo researchers are working with an international development organization and local coffee cooperatives in this central African nation to provide new economic opportunity by leveraging specialty coffee and the region’s potential to produce high-quality beans that can be sold at a greater profit.

They’re focusing on creating job opportunities in the coffee value chain for survivors and victims of landmines on Idjwi Island in the Lake Kivu region of the Congo, where the altitude — it’s nearly a mile above sea level — rainfall and latitude are perfect for growing coffee.

But decades of military conflict have embroiled the surrounding area, and landmines and other remnants of war lurk where coffee could be grown.

Coffee is often produced in current or former conflict regions, and its economic vitality adds to the risk. Coffee industry workers in the Congo have been maimed by landmines, leaving them with injuries that make it difficult to maintain, or find, gainful employment.

This is where Korydon Smith comes in.

He’s among only a handful of people in the world who have expertise working on inclusive design projects in global contexts.

Inclusive or universal design aims to improve the health, satisfaction and quality of life for people of all ages and abilities. That includes coffee workers in places like the DRC who’ve lost limbs due to landmines, and unexploded shells and grenades.

Smith, chair of the department of architecture in UB’s School of Architecture and Planning, was sought out by Michael Lundquist, executive director of the Boston-based Polus Center for Social & Economic Development, because of his experience in this field.

The Polus Center has worked over the past three-and-a-half decades to provide new opportunities for people with disabilities and victims of conflict in the U.S. and throughout the world.

There are a billion people globally who have disabilities, and 80 percent of them live in low- and middle-income countries, according to Smith. They face added barriers to their health and well-being, such as lower-quality housing, infrastructure and social services.

The DRC project will provide an avenue into the workforce for people with disabilities. It can also better position the Lake Kivu region as a prime producer in the specialty coffee market.

“The DRC is an emergent coffee-producing region where quality and productivity are improving,” said Smith, who also serves as faculty co-lead in UB’s Community of Excellence in Global Health Equity. “With added knowledge on the farming side and knowledge about what produces a high-quality cup of coffee, they can enter into that market even further.”

Smith and the Polus Center are collaborating with CPNCK, a coffee cooperative established in the eastern DRC in 2011, to build a new administrative building that will include training space and a station for cupping, the quality-control process in which trained testers – called “Q Graders” – sip java and note the tastes and aromas.

CPNCK sold a shipping container of its coffee to Starbucks last year, a purchase indicative of the region’s potential to break into the specialty coffee market in a big way.

As part of his field research, Smith visited coffee farms and coffee-washing stations to see how the work is performed, and how the tasks could be made easier for people with a disability, whether it be visual impairment or the loss of a limb.

With support from the U.S. Department of State’s Bureau of Weapons Removal and Abatement, the Polus Center sponsored a universal design workshop for coffee producers from the eastern Lake Kivu region in the spring. Smith led the workshop, during which coffee workers shared their struggles.

The team also gave a presentation – “From Conflict to Coffee: Overcoming Barriers for Coffee Growers in the Democratic Republic of Congo” – at the Specialty Coffee Expo in Boston in April, where team members outlined the project’s three main objectives:

•Designing and building a new administrative center and cupping lab for CPNCK coffee cooperative that draws on principles of inclusive design. Construction is expected to begin in December.

•Working with the Coffee Quality Institute – the organization that sets global standards – to create a new set of architectural-design standards for coffee facilities that accommodate people with disabilities.

•Developing a pattern of architectural prototypes that could be replicated in other coffee-producing countries affected by conflict, such as Colombia, Nicaragua or Cambodia.

“Setting new design standards for cupping labs, coffee-processing stations, roasting facilities and coffee shops will improve coffee quality and efficiency,” said Polus Center Executive Director Michael Lundquist.
“But more importantly, it will improve the livelihoods of small-hold coffee farmers who are victims of conflict and whose lives have been forever altered due to injuries caused by landmines and explosive remnants of war.”

The Polus Center-UB project has the potential to improve the coffee value chain worldwide by making it more inclusive. In addition to working in the DRC, Smith and his colleagues have partnered with international organizations within the coffee industry that are working in countries in Latin America, Asia and Africa.

“We’re looking to develop design standards that could be used in a variety of different countries and geographies around the world,” Smith said. “Our aim is to improve the quality of coffee by improving the design of facilities.”

On a larger scale, project partners envision elements of the architectural prototype created for CNCPK being tested in other coffee-producing countries affected by conflict. The team could then conduct research on these prototypes to learn what’s working and what isn’t.

Nicole Little, a master’s student in both architecture and urban planning at UB who’s worked on some of the project, called it “inspiring, because it proves that even when presented with the most challenging of geographies and building programs, architecture and planning can be leveraged to create socially inclusive spaces.”

To achieve this with the new CPNCK building, Smith and his team, which includes Stephanie Cramer, an adjunct instructor of architecture at UB, designed it with the following elements:

•A ramp leading up to the building that makes it easier to haul coffee beans up a slope, while also providing access to people using wheeled mobility devices such as wheelchairs.

•Windows that provide ample ventilation and daylight, making it possible for people with a visual impairment to work in the facility.

•A redesigned cupping lab that accommodates workers of varying heights and abilities.

Typically, Smith explained, cuppers stand at tall, fixed tables. The new design, however, features lower tables that rotate so that people using wheelchairs, or who can’t stand for a long time, can easily perform this important task. The cupping lab affords an opportunity for other local coffee cooperatives to quality test their product.

All of this takes into account local construction materials and practices, Smith noted.

“While we have an underlying set of principles, we realize we can’t build exactly the same building in every context,” he said.

By building a facility that’s designed to reintegrate survivors and victims of landmines into society, the project will complement peace-building efforts already underway in the region.

Smith shared a story told to him by CPNCK CEO Gilbert Makelele, who’s working to restore peace in the region through coffee. “He has one employee who was in a militia and left to join the coffee organization.”