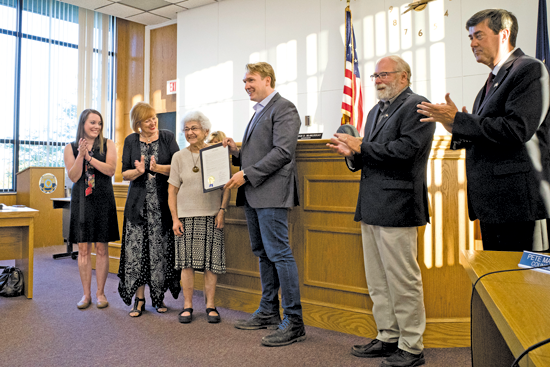 The Grand Island Town Board honored 96-year-old Lenore Tetkowski for her lifelong commitment to her hometown.

Tetkowski, 96, was an art teacher in the Grand Island Central School District from 1966 to 1995. Town Supervisor Nathan McMurray told Tetkowski he was “asked by several groups, including the League of Women Voters, to honor you.”

In presenting the proclamation before starting its regular agenda Monday, the Town Board noted Tetkowski’s long list of accomplishments:

•Chairwoman of the citizen committee to build a high school on Grand Island, which opened in 1963.

•Co-chair of the League of Women Voters of Buffalo Niagara, leading a major study of the area’s charter schools.

•Served as the Grand Island chair for UNICEF for over 50 years, “later becoming known as the town’s UNICEF Lady,” McMurray said.

•And, most recently, the 2019 Buffalo Weavers Guild Award for best hung fiber art.

“If only I was so productive,” McMurray said.

The board issued the proclamation to Tetkowski “for her commitment to Grand Island, educating voters, and honors Grand Island’s award-winning master weaver who, besides creating beautiful, artistic textiles during her entire adult life has been weaving together, with passion and commitment, art, education and civic engagement.”