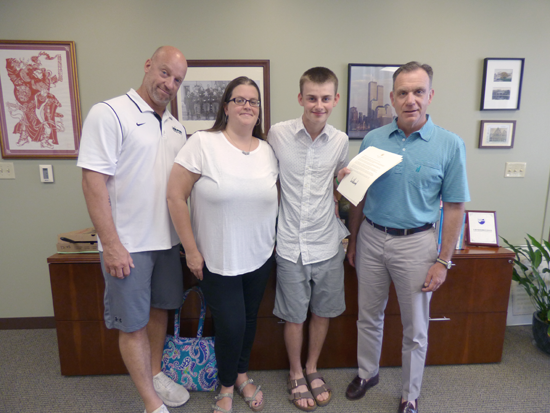 On June 28, Charles Dieteman, a sophomore student at Lewiston-Porter High School, was awarded with both the 2019 Prudential Spirit of Community Award and the President’s Volunteer Service Award for his work raising money for Empower.

The awards were presented by Superintendent Paul Casseri, who praised Charles and his efforts throughout the small ceremony.

Charles, who was born with cerebral palsy – a neurological condition that hinders movement and muscle coordination – began fundraising when he was in fourth grade. Since then, he has personally run a number of annual fundraisers aimed at raising money for Empower.

After the ceremony, Casseri continued to applaud Charles and his work.

“He’s just one of those impact students … who everybody knows, everybody loves, and he’s a role model, truly a role model for … being able to overcome his own disability and yet give back to others,” Casseri said.

The Prudential Spirit of Community Awards program is the U.S.’ largest youth recognition program based exclusively on volunteer community service, honoring middle level and high school students for outstanding service to others at the local, state and national level. The award signifies that Charles is among the top 10 percent of students in terms of community service in New York.

The President’s Volunteer Service Award is an initiative of the Corporation for National and Community Service and is administered by Points of Light. It recognizes and celebrates Americans making a positive impact as engaged and deeply committed volunteers.

Along with the awards, Charles also received a signed letter from President Donald Trump.

“On behalf of a grateful Nation, I thank you for your service to your fellow American and those most in need,” The letter begins. “Through your dedicated service, you have ensured the continuation of America’s unparalleled commitment to improving the lives of others.”

When presented with the president’s letter, Charles was nearly speechless.

“Its amazing,” he said. “I had no idea what was coming or what to expect.”

“My gosh. It’s hard to even to even put into words,” she said.

When asked about her son’s achievements, McLellan said she’s still overwhelmed by it all.

“It brings me to tears, ever since he started doing it,” she said. “The way everyone accepted him and caught on and wanted join along was very emotional and we’re proud of him.”

The awards are the latest in a long list of honors that Charles has received over the years. Previously, he was awarded the Niagara Police Athletic League “Do the Right Thing” Award, Empower’s Junior Leadership Award, the 2016 Junior Leading Luminary Award, and the Anthony J. Koenig Volunteer Award.

Despite the recognition, Charles said he’s just passionate about the work.

“I wanted to teach people about cerebral palsy; but not even that, I just love to volunteer and help out the community. It’s just awesome to do,” he said.

Also in attendance on Friday was Lew-Port football and basketball coach Matt Bradshaw. Bradshaw came to know Charlie when he became the student manager for the school’s football, basketball and baseball teams.

Bradshaw praised Charles’ positivity and what it means to the team.

“If you were to walk down Center Street right now … everybody knows him. He doesn’t seek it he’s just genuinely that kind of kid,” Bradshaw said.

Following the event, Empower Executive Director Jeff Paterson took a moment to reflect on what it’s been like to work with Charles.

“Charles was one of the first people I met when I started at Empower. I had been told that there was a student at Lew-Port who had raised some money for us and that I needed to go meet him and get a picture taken with him. ... I had no idea just what an incredible young man he was until I actually got a chance to meet him.” Patterson said.

Since that meeting, his admiration for Charles has only increased. According to Paterson, Charles’ efforts have raised close to $10,000 for Empower.

“We’re just so impressed with him,” Paterson said. “We can’t say enough about him and the work that he does.”

Paterson heralded Charles’ as role model and praised his ability to overcome his own obstacles to generate goodwill.