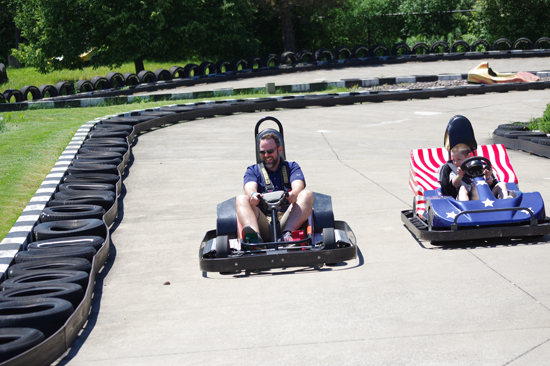 Greg Kaiser makes a pass on the go-kart course. (Photos by Larry Austin)

Family members that have supported Grand Island Fun Center owner Dave Glian in business have done so from the very beginning, and when Glian says “very beginning” he means fourth grade.

The owner of the entertainment complex on Grand Island Boulevard said he got his start as “a pen repairman in fourth grade until I got yelled at by the teacher.”

“Then all through middle school, high school, I just always liked taking on projects. My first real success was I built a website my senior year of high school,” he said Wednesday at a ribbon-cutting to unveil the latest improvements at the Fun Center.

“Don’t tell my parents, but I skipped school to build the website,” Glian said. “And, you know, my freshman year of college, it grew so much, I was skipping school just to run the business.”

He sold that business but said, “Basically, since I was born, I was just always starting different businesses.”

One key to building a business, he said, is constantly looking for ways to upgrade, improve, and invest, like he has done this year at the Grand Island Fun Center, located at 2660 Grand Island Blvd.

“I wanted to do something big and kind of just reinvent the business” in line with its 25th anniversary of opening, Glian said. There is a new food menu, new batting cages new ticketing system.

“I just really wanted to touch every element of the business,” he said.

Glian bought out his father’s share of the business and now owns the whole property too.

“I bought the business in 2016 from my dad. I bought the real estate this year,” Glian said.

Members of the chamber and kinfolk helped Glian with the ceremonial blue ribbon Wednesday.

“The family that was here today, have been supportive since day one,” Glian said. “I started businesses when I was tiny, and they all supported my crazy ideas like this one here.”

Chamber President Eric Fiebelkorn noted Glian has “invested a significant amount of money over the years, and really time and energy, to make sure they’re not only are up to date and everything’s in working order, but that there’s new attractions.”

Fiebelkorn added, “I think for entertainment venues, people get bored quickly. You have to have new things coming in and out and make some changes to get people coming back.” 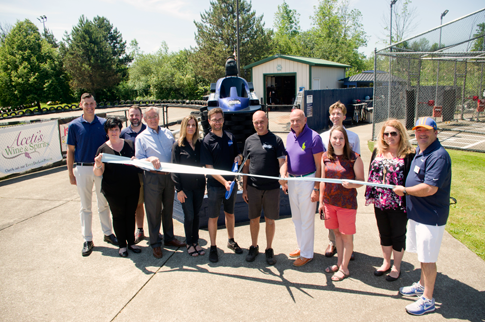