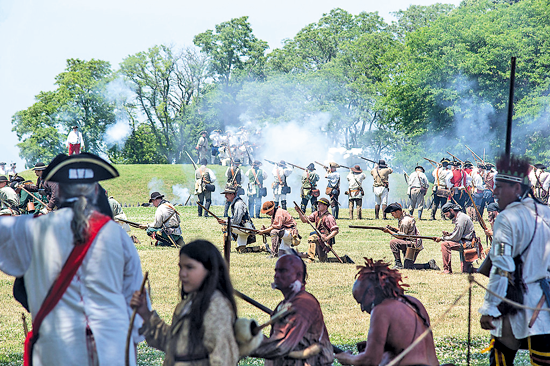 At 2 p.m. daily, large-scale battle re-enactments will boom at Old Fort Niagara during the 40th anniversary of the French and Indian War Encampment. Be sure to arrive at least 30 minutes early for the best viewing options. (Photos by Wayne Peters)

Old Fort Niagara anticipates welcoming about 500 reenactors and close to 10,000 visitors over the weekend of July 5-7 for the 40th anniversary of the French and Indian War Encampment. This annual event recreates highlights from the actual 19-day British siege of the French fort in July of 1759 through history tours, cannon firings, military music, sutlers, games, dancing, musket firings and living history camps of British, French and Native reenactors.

“Forty years says a lot about our community of supporters,” said Robert Emerson, executive director of the Old Fort Niagara Association. “To the thousands of local and regional visitors who have attended this event and our loyal and engaging community of reenactors, we say ‘Thank you’ for all of the years of support, and look forward to welcoming you back in July.”

Daily highlights at the French and Indian War Encampment include: morning tours (times vary) that provide historical background for what’s going on each day; children’s drill programs, where kids will use wooden muskets and learn how to be a soldier in 1759; large-scale battle re-enactments between British, French and Native forces; and artillery demonstrations.

Note: In-and-out access to the walled fort is halted 30 minutes before the daily 2 p.m. battles in order to secure safe crowd-control barriers.

The full schedule of events is available at www.oldfortniagara.org.

Food, snacks, drinks and ice cream will be available for sale each day from 11 a.m. to 4 p.m. at the log cabin and adjacent food tent.

The fort’s Bachelor Officers’ Quarters and its New Fort Niagara displays (post-Civil War through 1963) will be open to the public from 10 a.m. to 4 p.m. daily.

Everything is included in the $14 adult admission price, while children ages 5 and under are admitted free. Admission is also free for Old Fort Niagara Association members. New or renewed memberships to the Old Fort Niagara Association will not be processed onsite during the French and Indian War Encampment. Memberships can be purchased online at www.oldfortniagara.org/membership/registration.

Other Summer Events at Fort Niagara

•July 13 through Oct. 14: Lighthouse open to public (noon-3 p.m. daily) – Free admission for visitors; one must be at least 4 feet tall and sign a waiver.

•Aug. 10-11: “Soldiers of the Revolution” (reenactment) – Discover life on the New York Frontier during the American Revolution. Included are period camps, musket and artillery demonstrations, military battles and activities for kids.

Old Fort Niagara (www.oldfortniagara.org) is a Registered National Historic Landmark and New York State Historic Site operated by the Old Fort Niagara Association, a not-for-profit organization, in cooperation with the New York State Office of Parks, Recreation and Historic Preservation. The site is open daily from 9 a.m. to 5 p.m. through June and from 9 a.m. to 7 p.m. in July and August (last tickets sold 30 minutes before closing). 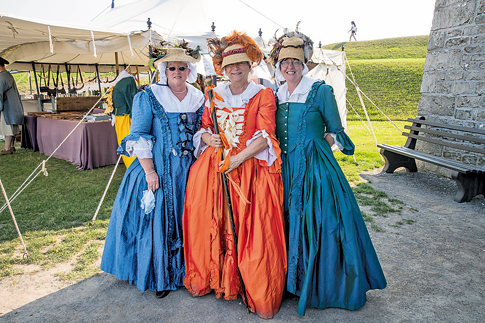 Nearly 500 re-enactors travel to Old Fort Niagara each year to help recreate the historic siege of 1759. This event features activities around the British and Native camps. Inside the walls of Old Fort Niagara one will find the French camp, soldiers, civilians and sutlers (period merchants) mingling with visitors to create a one-of-a-kind living history experience. Visitors are welcome and encouraged to visit the camps and interact with the re-enactors.