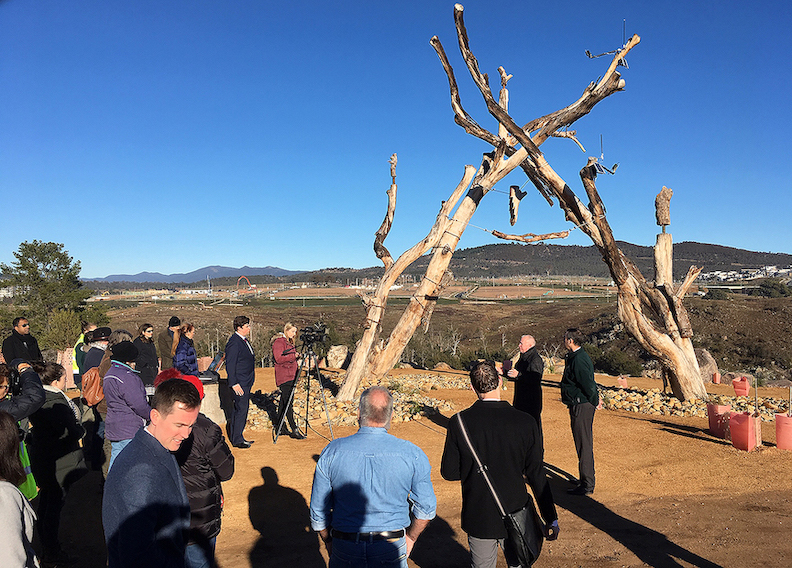 Project partners gathered to mark the formal dedication of "Life Support" on June 18 in Australia. The centerpiece is a salvaged 400-year-old yellow box tree lined with bird shelters and bat boxes. (Photo courtesy of Ashley Eriksmoen/UB)

What do you do with a dead, 400-year-old tree? If your specialty is animal architecture, you turn it into a living habitat/art project.

It rests at the foot of Barrer Hill in the Molonglo Valley, located a few hours southwest of Sydney. The site is an ecological offset zone, an area set aside adjacent to urbanized development, in Canberra, the capital city of Australia.

Lined with bird shelters and bat boxes, “Life Support” is a living art sculpture that will serve as a functional habitat for a wide variety of bats, birds and reptiles.

It was the final piece of a larger restoration project aimed at revegetating a landscape that had been degraded – there were no mature trees left standing across the 123-acre site – due to farming and commercial logging.

It’s made from a salvaged, 400-year-old yellow box tree that was removed from a residential neighborhood in Canberra. The tree was slated for removal, because there was a risk of dangerously heavy branches falling. The tree parts used in “Life Support” collectively weigh more than 20 tons, and the sculpture stands nearly 50 feet tall.

From this dead tree, however, new life will spring.

“Large trees, especially those that have weathered time – hundreds of years – have all sorts of properties that enable more habitat and biodiversity,” explained Hwang, associate professor and associate chair of the department of architecture, school of architecture and planning.

“The question that I was thinking about is, how do you take a tree and use it in such a way where it would allow someone to sort of question why that is being used the way it is and why it’s important to save a tree and to use it for what it can do,” she added.

Much of Hwang’s work focuses on “habitecture,” or architecture designed for wildlife. Two of her previous works, “Bat Cloud” and “Bat Tower,” have provided spaces where these often misunderstood creatures can thrive.

In addition to her faculty role at UB, Hwang leads the architectural practice Ants of the Prairie.

As the architect and designer for “Life Support,” Hwang developed the design concept, overall design ideas and architectural construction drawings.

The roots for “Life Support” formed in 2016 when Hwang was invited to present on her habitecture work during a symposium at Australian National University (ANU). ACT Parks and Conservation’s Darren Le Roux presented on managing habitat structures in urban landscapes at the same conference.

Another “Life Support” collaborator, Mitchell Whitelaw of the ANU School of Art and Design, noticed the similarities in Hwang’s and Le Roux’ work, as well as his own in mapping ecologies, and suggested they all collaborate.

The following year, Hwang received the International Craft and Design Residency at the ANU School of Art and Design, and began working on concept models for the project in early 2017. At the start of her residency that summer, Hwang toured the Molonglo Valley and Barrer Hill site with Le Roux, who mentioned the idea of using an old tree.

“As luck would have it, we find out that this very large old tree was slated for removal, so we decided to take it and use it for the project,” Hwang said.

After a month in Australia, Hwang returned to Buffalo and spent a considerable amount of time developing construction drawings. “I had to revise the drawings three times to try to bring down the overall cost,” she said.

Construction began earlier this year and was completed in March. Project collaborators gathered at “Life Support” on June 18 for a formal dedication marking the public re-opening of the Barrer Hill site following the six-year restoration.

Wildlife monitoring cameras hooked up to “Life Support” will allow Whitelaw to gather data and develop a web interface to track species.