The Diocese of Buffalo reports the passing Wednesday, June 12, 2019, of Father Lynn Shumway.

Shumway was a native of Niagara Falls. He was 50 years old when he entered the seminary and 55 years old when he was ordained. Prior to that, he taught high school Latin for several years in Niagara Falls and West Seneca; was a supervisor in the information systems department at Conrail and served in the U.S. Army. He was honorably discharged in 1977 with the rank of captain.

Shumway was born July 9, 1947, in Niagara Falls, the son of Melvin and Lucille (née Bender) Shumway, both deceased. He is survived by his cousin, Patricia Knox of Grand Island.

He went to high school at Bishop Duffy High School in Niagara Falls and earned a Bachelor of Arts degree and a Master of Science degree in education from Niagara University. He studied at Christ the King Seminary in East Aurora and received a master’s degree in divinity.

He was a member of the Knights of Columbus, 4th degree.

Shumway donated his body to the University of Buffalo Anatomical Gift Program. Burial, at a later date, will be at Mount Olivet Cemetery, Kenmore. 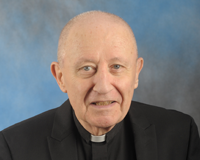