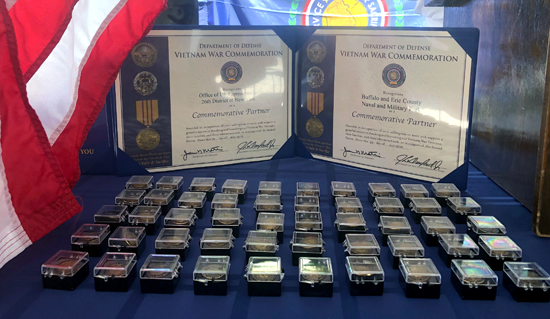 The America Vietnam War Commemoration was authorized by Congress, established under the secretary of defense, and launched to commemorate the 50th anniversary of the Vietnam War. Both Higgins and the Buffalo Naval Park are registered commemorative partners.

Higgins said, “Decades ago, Vietnam veterans put their lives on the line and returned to a nation that was certainly less than grateful. And while we can’t undo the unjustified reception they received years ago, we can work today and each day forward to appropriately welcome them home by expressing the sincere appreciation they deserve for their commitment and selfless service to this country.”

Approximately 75% of the docents at the Buffalo Naval Park are Vietnam veterans. Many were among those honored during the ceremony commemorating the anniversary of the war.

The commemoration pledges to honor U.S. veterans who served on active duty in the Armed Forces at between Nov. 1, 1955, and May 15, 1975. Under the program, Vietnam veterans nationwide will receive a long overdue “Thank you” through events held between Memorial Day 2012 through Veterans Day 2025, which include the presentation of Vietnam War commemoration pins.

The U.S. Department of Veterans Affairs stated approximately 2.7 million American men and women served in Vietnam, with more than 8.74 million serving on active duty during the Vietnam era.

On June 14, 1777, the Continental Congress adopted a resolution suggesting the design of the U.S. flag. That flag was first carried into battle on Sept. 11, 1777. In 1916, President Woodrow Wilson was the first commander-in-chief issuing a proclamation recognizing June 14 as National Flag Day. It was codified as a national observance by Congress and signed into law by President Harry Truman in 1949, officially beginning the annual tradition of celebrating Flag Day on June 14.