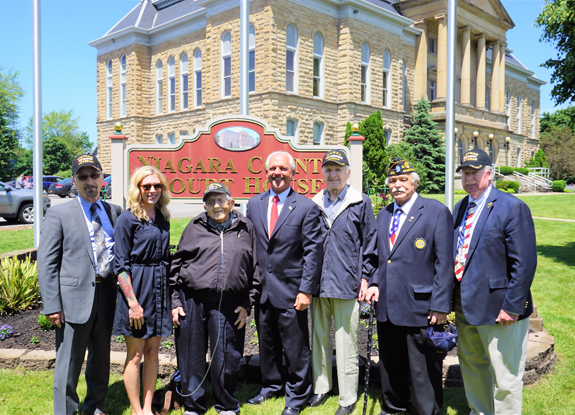 In honor of National Flag Day, Niagara County Clerk Joseph A. Jastrzemski presented a flag-raising ceremony on Friday, unveiling three new flagpoles in which U.S. military veterans who served in World War II, Korea, Vietnam and the Middle East raised the American, state and county flags in front of the county courthouse.

The American flag raised at the courthouse was sent from Congressman Chris Collins, who flew it over the U.S. Capitol Building in Washington in dedication to Niagara County and its veterans.

Jastrzemski, in conjunction with Chairman of Niagara County Legislature Keith McNall and Veterans Service Agency Director Jeff Glatz, presented proclamations to each veteran on behalf of Collins and Niagara County.

During the ceremony, McNall extended his gratitude to all veterans.

“It is today that we need to take a moment and think about the American flag, what it stands for, and what it truly means to be an American,” he said. “We must, as a people, remember that we owe our servicemen and women a debt we can never fully repay.”

Jastrzemski, who planned the ceremony, also expressed his thanks and purpose for holding this special event.

“It is important that we honor all of the veterans who served this great country,” he said. “Our flag symbolizes the precious freedoms that we hold dear, and those freedoms remain because they were fought for by these brave men and women in uniform.”