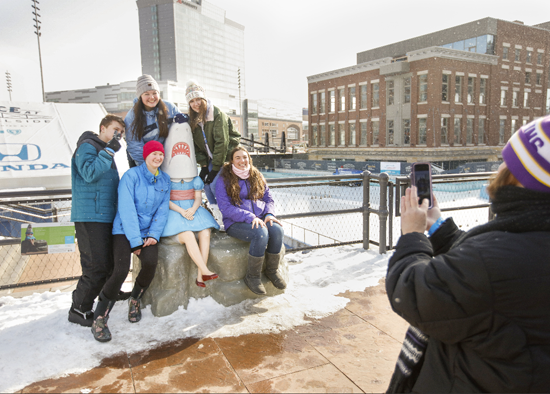 Board receives information on Terminal A reuse advisory group, plans for 200 acres on Outer Harbor

The Erie Canal Harbor Development Corp. board of directors met and approved a measure for the repair and maintenance of “Shark Girl,” to ensure the popular sculpture remains at Canalside for the foreseeable future.

The contract with the Albright- Knox Art Gallery to complete the scope of work will not exceed $49,900, which includes temporary deinstallation, conservation/maintenance and reinstallation activities.

“ ‘Shark Girl’ is a beloved, whimsical year-round fixture at Canalside, but needs some rejuvenation after flashing her toothy grin for so many selfies over the years,” ECHDC Board Chairman Robert Gioia said. “This agreement with the Albright-Knox will allow ‘Shark Girl’ to better handle all her fans interacting with her, as well as stand up to harsh Buffalo winters, for years to come.”

Unveiled at Canalside in the summer of 2014 as part of a public art initiative between Albright-Knox, Erie County and the City of Buffalo. The sculpture by artist Casey Riordan Millard quickly became a social media darling – and as synonymous with Canalside as the Whipple Truss Bridge.

As the star of thousands of photographs and selfies, “Shark Girl” is beginning to show excess wear and tear that is beyond repairing with standard maintenance work.

During the past four-plus years, Albright-Knox has worked with ECHDC to remove “Shark Girl” from Canalside for short periods of time to make various repairs and touch-ups. However, officials said more permanent solution is needed to ensure “Shark Girl” remains at Canalside for years to come.

Under this new agreement, Albright-Knox is expected to remove “Shark Girl” from Canalside sometime after Labor Day for a period of approximately eight to 10 weeks to begin repairing and restoring the piece with Millard’s oversight. Albright-Knox will then return and reinstall “Shark Girl” to Canalside. The scope of work includes ongoing annual maintenance of the piece, including any future paint touch-ups and conservation.

The project funding source will be the New York Power Authority relicensing agreement.

Also at their meeting, the ECHDC board was presented with two informational items:

•ECHDC has established a Terminal A Reuse advisory group to explore potential reuse options for the buildings and surrounding property of Port Terminal Building A on the Outer Harbor. The complex, constructed in 1930-31 by the Ford Motor Co., was ideally located along the waterfront for convenient shipping and receiving. The building was designed by Albert Kahn for large-scale automobile assembly line production and was recently approved as a Local Landmark/Landmark Site by the Buffalo Preservation Board.

The advisory group’s work will assist the ECHDC board of directors to understand potential planning directions and provide nonbinding strategic advice. It is expected the committee will meet monthly or bimonthly for a 12-month period to prepare written materials for presentation to the ECHDC.

•ECHDC has finalized its plan for nearly 200 acres on Buffalo’s Outer Harbor and will move into the next phases of the project, including conducting a State Environmental Quality Review (SEQR) and developing a general project plan. The plan emphasizes recreation in three unique waterfront zones: First Buffalo River Marina; the 166 acres that include Wilkeson Pointe to Bell Slip; and Terminal B. The overall goals of the project include improving use and enjoyment of the Outer Harbor, enhancing bicycle and pedestrian access, and minimizing adverse impacts on communities and the environment.

Buffalo Billion II has committed $15 million for the next phase of this project.