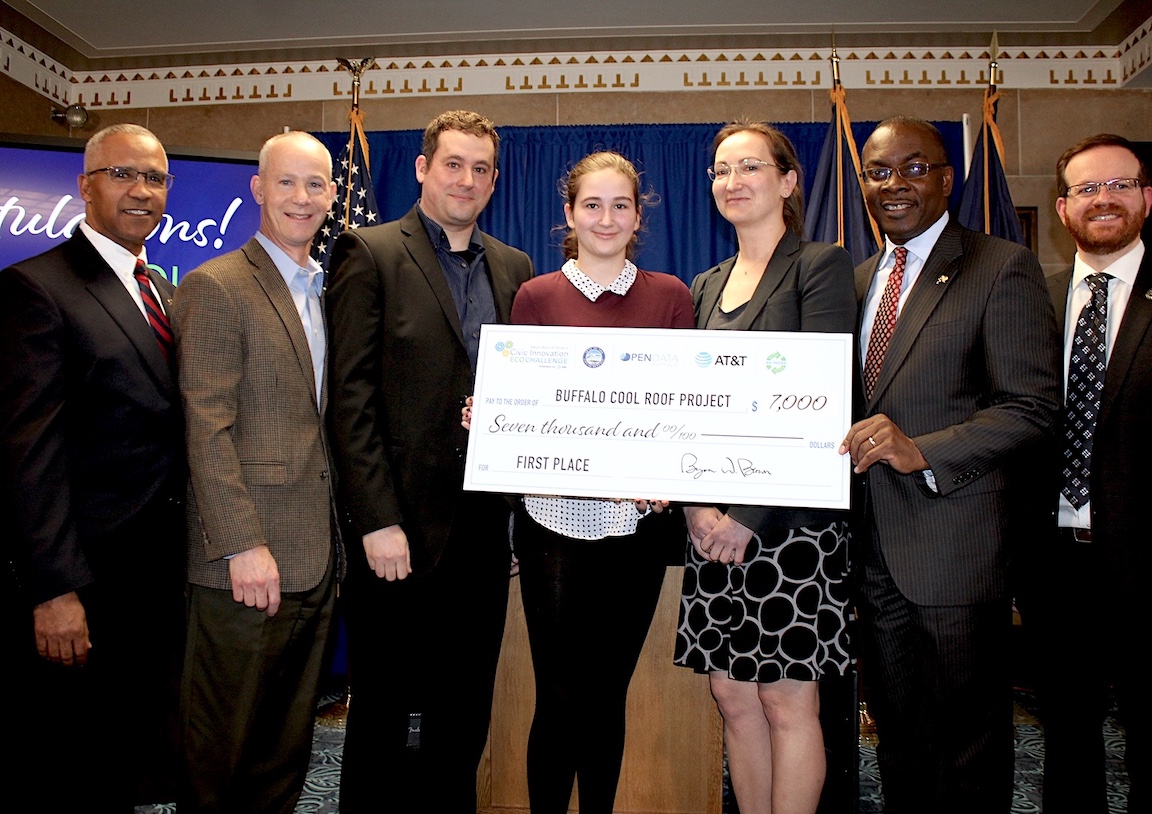 The Buffalo Cool Roof Project employs GIS mapping and artificial intelligence rendering to identify roofs that could be painted white to decrease energy use for air conditioning, thus reducing both cost and environmental impact, while keeping occupants more comfortable. Using the solution, property owners can quickly see if their roof is a candidate for conversion to a “cool roof.”

Brown said the winning entry ties in extremely well with the City of Buffalo’s efforts to gain official designation as a Climate Smart City. The designation by New York State Energy Research and Development Authority requires municipalities to take quantifiable steps to reduce their carbon footprints and adopt climate-friendly policies.

“Protecting our environment and working to prevent the most severe consequences of global climate change are the most critical challenges society faces today. The Buffalo Cool Roof Project has the potential to become an important tool for my administration, our residents and businesses to take climate smart action,” Brown said. “I congratulate Agnes and Jesse on their innovative and proactive entry.”

The Buffalo Cool Roof Project was awarded $7,000 as the first-place entry. Co-developer Wilewicz, a partner at Hurwitz & Fine, is a member of the law firm’s insurance coverage practice and litigation groups. Farinacci works for IBM’s Buffalo Innovation Center. Both earned their undergraduate degrees from the University at Buffalo in 2003.

“We left Buffalo after graduation to find work, but, thanks to the renaissance in Buffalo under Mayor Brown's leadership, we were very happy to move back to Buffalo around five years ago,” Farinacci said.

“This competition would not have been possible without the support of our partner, AT&T, which generously donated $10,000 to support the challenge. Not only did those funds attract the attention of the participants, it also led to the development of the winning apps,” Brown said.

“The quality of the inventive solutions developed for this challenge is extremely impressive and serves as yet another example of the vibrancy and creativity of Western New York’s technology community,” said Amy Kramer, president, New York, AT&T. “AT&T is proud to collaborate with Mayor Brown again this year to host this challenge, and task the local innovation community with creating unique technology for social and civic good. As a leader in harnessing technology and data via our smart cities’ environmental solutions to help communities become greener, AT&T applauds this administration for embracing innovation to enhance environmental sustainability.”

Brown also thanked Environmental Systems Research Institute, supplier of the software the city uses to manage and analyze its geospatial data, for its $3,000 contribution to the competition; as well as Socrata, the web host of Open Data Buffalo; and Modern Recycling, the City of Buffalo’s partner, for curbside single stream recycling collection and processing. Each contributed $1,000 to the competition.

Jonathan Hutchison, an employee of Helm Experience & Design, headquartered in Buffalo’s Innovation Center tech incubator, was awarded the $2,000, second-place prize for his Digital Green Code application. The Town of Tonawanda resident is a graduate of Daemen College. The Digital Green Code is a user-friendly application that makes it easier to search the text of the Buffalo Green Code, the historic update of the city’s 63-year-old zoning code and land use policies that was adopted in 2016.

Brown praised this entry for its potential to boost resident engagement with the Green Code, while also increasing transparency of the city’s planning and zoning activities.

The $1,000 Esri Award, for the entry that made the best use of mapping technology, was given to a submission from mother-son team Susan and Nicholas Shea.