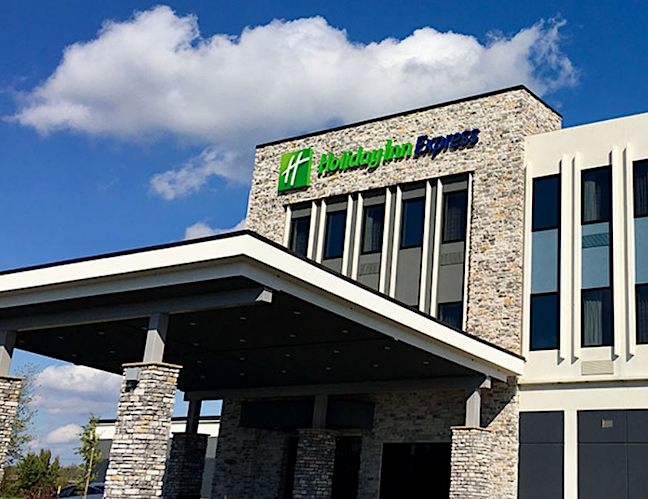 Empire State Development on Friday announced $1 million in “Restore NY” funding was provided to Grand Island Hotel LLC upon the completion of the $8 million Holiday Inn Express Hotel, located in the formerly vacant and blighted Dunlop building on Grand Island.

A press release stated, “Redeveloping the former Dunlop building was the highest economic priority for the town when it requested funding to make improvements to the abandoned and heavily vandalized eyesore in an effort to transform the prominent property and encourage economic development at the highly visible location. ‘Restore NY’ supports municipal revitalization efforts by awarding funding for projects that will reinvigorate downtowns and generate new economic opportunity in communities from Western New York to Long Island.”

“The Holiday Inn Express on Grand Island is a boost for tourism in Western New York, and New York state is proud to award funding to make this transformation a reality,” said Lt. Gov. Kathy Hochul, who made the announcement. “Removing asbestos from an old structure is an expensive undertaking. The ‘Restore NY’ program exists to allow our state government to partner with private industry to benefit communities across New York. This building that has sat vacant for decades as a blight on the community has now been repurposed for the future, creating jobs and economic investment.”

“It has taken us a long time to complete this project, but we were driven to transform this well-known building into a point of pride for area residents and a beacon for drawing visitors to the region,” said Jayesh Patel, CEO of Rudra Management and Rosewood Hotels. “We look forward to serving tourists visiting Niagara Falls, business travelers and families looking to enjoy the region.”

ESD implements the “Restore NY” program. The initiative requires the new owner of the hotel to spend at least $2 million on remediation in order to receive a $1 million “Restore NY” grant (which, in this case, was used for asbestos abatement). Cities, towns and villages are all eligible to apply for support for projects that include demolition, deconstruction, rehabilitation or reconstruction of vacant, abandoned, condemned and surplus properties. Projects located in economically distressed communities are emphasized and encouraged.

“The old Dunlop building has gone from an abandoned eyesore to a new hotel, a transformative symbol of how ‘Restore NY’ funding can help to create economic assets from once-blighted properties,” said ESD President, CEO and Commissioner Howard Zemsky.

Highly visible from the I-190 between Buffalo and Niagara Falls, the recently opened Holiday Inn Express at 2761 Long Road sits on 27 acres south of the northern set of Grand Island Bridges, just six miles from Niagara Falls State Park and down the road from New York state’s new welcome center. Five years of demolition, renovation and design work converted the vacant, 73,000-square-foot former Dunlop Building into a unique hotel that includes a breakfast bar, two meeting rooms, a business center, an indoor pool and a fitness room, and a rooftop lounge for guests.

The hotel is creating approximately 32 jobs.

The three-story white building was originally built in the 1960s for Hooker Chemical & Plastics Corp., but Dunlop took it over in the 1970s. It has been vacant since 1993. Rudra Management and Rosewood Hotels purchased the former Dunlop Building in 2014 for $850,000. The company currently has more than 52 hotels in its portfolio, with most of them located in New York.

Assemblyman Angelo J. Morinello said, “It is a pleasure to participate in the dedication of the Holiday Inn of Grand Island. This building sat here as a mystery for many years without any foreseeable future, however, now it not only has a future, but it also is an asset to the region. This shows what a public and private partnership can accomplish. Thank you to all who made a dream become a reality.”

Town of Grand Island Supervisor Nate McMurray said, “This is an amazing change. For decades and decades, that location sat as an eyesore, a wreck, a haunted house. Now it’s a beautiful hotel. And the area around it, thanks to a creative public-private partnership, has also changed. It was zoned for generations as prime commercial real estate, but sat empty. Now, it’s ready for more!”