When Niagara Catholic High School closed in 2018, many of its historic and sentimental relics went to alumni or local nonprofit sites. Other items were simply too large or too significant to be auctioned off.

One such piece is a statue of Mary that stood in front of NC’s entrance on 66th Street.

That figure will soon have a new home – outside of the St. Peter R.C. Church rectory on Center Street in Lewiston.

A dedication ceremony will take place as part of the 10:30 a.m. Mass on Sunday, May 26. The statue will be part of a newly landscaped area.

“It’s going to be an outdoor shrine to the Blessed Mother. We got the statue of the Madonna that was at Niagara Catholic,” the Rev. Monsignor David LiPuma said. “That statue has great meaning to the former Madonna graduates. So, what we’re doing is we’re putting a granite base on it. And it’s dedicated to the alumni of St. Mary’s, Madonna, Bishop Duffy and Niagara Catholic, and it’s in gratitude to the Rosary Alter Society from the parish and St. Peter’s parishioners.”

“I have the date when St. Mary’s started. It was 1927. And then when Niagara Catholic closed, it was 2018. Those dates are going to be on there. So, it’ll be a nice place for people to come.

“There’s going to be memorial bricks down the line that people can purchase if they want to engrave their names or family or something like that.”

LiPuma is leaving St. Peter’s at the end of the month to begin a new position June 1 at Our Lady of Victory Basilica.

“It’ll be one of my last acts,” he said. “This all kind of fell into place. … The ladies here from the Rosary Society have wanted an outdoor statue. It was providential that, when Niagara Catholic closed, we found out that that was the statue. And (former NC board chairwoman) Judy Nolan graciously helped us get it.” 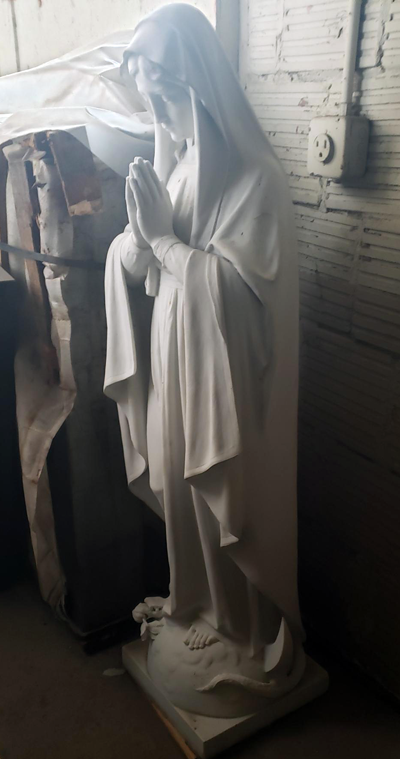