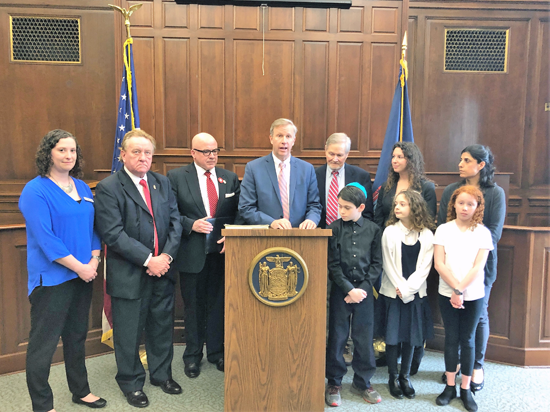 New York State Sen. Chris Jacobs commemorated Holocaust Remembrance Week by announcing he has introduced legislation (S5431) that will strengthen and renew New York state’s commitment to educate citizens about the Holocaust. The senator said passage of the bill would address a pressing need for better Holocaust education in schools.

“I am troubled to learn of the growing lack of knowledge about the Holocaust, its atrocities and the people who were persecuted,” Jacobs said. “In a number of surveys, close to half of the respondents – and in some cases more – could not identify concentration camps or recall crucial details. We must do a better job of preserving the history of the Holocaust and passing its lessons on to future generations.”

In 2005, a poll by the American Jewish Committee found 46% of Americans could not identify what Auschwitz, Dachau or Treblinka were. A worldwide survey conducted by the Anti-Defamation League in 2014 found 54% of the 53,000 people polled never heard of the Holocaust. Similar surveys in the U.S. and Canada showed equally disturbing results with the lack of awareness substantially greater among people between the ages of 18-35.

The legislation introduced directs the commissioner of education to conduct outreach and provide resources to school districts across the state for course work, instruction and curriculum related to the Holocaust, including grants for speakers, field trips, lectures and events. The bill also directs the regents of the State University of New York to update the prescribed courses for Holocaust education currently provided for under state education law, and to fully fund the republication of volumes I and II of the “Teaching About The Holocaust and Genocide” textbooks.

The Jewish and Polish populations suffered tremendous losses during the Holocaust, and leaders in those Western New York communities attended the announcement of Jacobs’ legislation.

“Everyone needs to recall, remember and know, in this time of rising anti-Semitic bigotry, the suffering and misery unleashed by the Nazi death machine against humanity,” said James Lawicki, president of the Western New York Division of the Polish American Congress. Sen. Jacobs' proposed legislation to have the 1985 ‘Teaching About The Holocaust and Genocide’ textbooks republished, and reintroduce Holocaust and genocide studies into New York state schools is timely and proper, and the Polish American Congress wholeheartedly endorses his efforts.”

“Now, more than ever before, it is vital that teachers have the best training and resources possible to teach the Holocaust,” said Elizabeth Schram, executive director of the Holocaust Resource Center of Buffalo. “If Sen. Jacobs’ bill becomes law, our teachers would be properly prepared to teach such a large and complex topic, and ensure that students have a much deeper understanding of the Holocaust. With such a strong educational background, students would be armed with the ability to negate deniers and be prepared to identify and stand up to hatred and bigotry wherever it occurs.”

Jacobs cited bipartisan support for improving Holocaust education, noting a companion bill was being introduced in the Assembly. The senator said he hoped the commemoration of Holocaust Remembrance Week would serve as a catalyst for speedy passage in both houses.

“It is so important that we use the memory of the millions of lives lost in the Holocaust as an antidote to hate and intolerance, and never allow this type of genocide to ever occur again,” he said. “With fewer and fewer survivors and witnesses left alive, our responsibility to preserve and strengthen these lessons becomes even greater, and I think this legislation will help us meet that obligation.”