Things are not always as they appear.

Mental illness in most cases is hidden. Others around you could be suffering, and you may never know or have any idea. Friends, family members, classmates, they could be suffering and battling inner demons relating to depression or anxiety but appear happy and go-lucky on the outside, so you have no way of knowing what they are going through. They are hiding their struggles, like many others who struggle with mental illness today.

When I was a child, my dad was always my hero; he was always so happy and hilarious, and he always knew how to brighten my day and make me feel loved to the greatest extent. If you would have told me 10 years ago that my dad was suffering from depression I wouldn’t have believed you. He was the happiest person I knew; how could he have been suffering? Little did I know that my dad had been struggling my entire life with depression and suicidal thoughts and without the help of his doctor he may not be with us today.

“It’s hard to explain; you feel totally alone, you don’t want to do anything, you feel like people would be better if you weren’t around, you feel tired, isolated, like being in a gray cloud that is never going to end,” My dad, John Collins, said.

He has been suffering from depression since his early 20s but he never reached out for help until a later time in his life because of the stigma and mentality about mental illness that others had around him.

“People think that you can just ‘snap out of it’ or start thinking more positive and you’ll feel better,” my dad stated.

He explained that people make you feel weak minded if you speak of your mental illness or your struggles so many keep it to themselves. 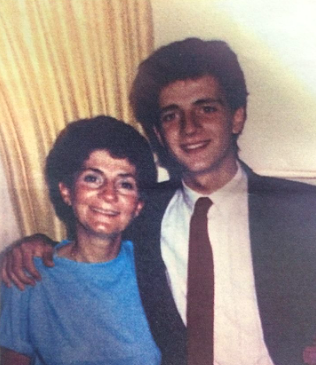 Interviewing and trying to get others to talk about their mental illnesses or even mental illness in general is difficult and uncomfortable, but why? Our society has shaped us to believe that mental illness is something we do not talk about and something that is better kept to ourselves and our health care providers, a taboo of sorts.

In today’s day and age mental illnesses such as depression and anxiety are viewed as a prohibited topic of discussion and something that many people don’t prefer to speak of or even think about for that matter. But as time goes on people are becoming more and more comfortable speaking of mental illness, not necessarily of their own, but as a means of breaking the stigma. We have come a long way from the days of shock therapy, but there is still an immense amount of work to be done.

Mental illness affects “Tens of millions of people each year,” The National Institute of Mental Health said. These statistics only suggest an estimate of the people around the U.S that suffer from mental illness, many of those who suffer never receive treatment and many people never even speak of their suffering.

Why are people afraid to talk about mental illness? The answer is, the stigma.

The Mayo Clinic states, “A stigma is when someone views you in a negative way because you have a distinguishing characteristic or personal trait that’s thought to be, or actually is, a disadvantage.”

In other words, a stigma is a stereotype that society has created for a certain characteristic about people to view them in a negative way, and in most cases this characteristic that makes these people different is something that is out of their control. The effects of a stigma can be very detrimental especially when it comes to the stigma with mental illness.

Some of the harmful effects of the mental health stigma, as told by Mayoclinic.org, would include people being reluctant to seek help because they are afraid of how they will be judged or stereotyped, and once they do seek help they are thus bullied because of the stigma. People that do speak out about their suffering are also very often  discriminated against in the workplace, school, and social activities because of the stereotypical mentality that they are not well enough to function or do as good of a job as a person who isnt suffering from a mental illness.

The stigma creates a perception that people with mental illnesses do not have the ability to function as well as someone without mental illness. There is also a stereotypical idea that people with depression or anxiety are “faking it” or just have “the blues” and they’ll get over it, people are afraid to open up about their suffering, thus ultimately making their suffering worse.

Holding in ones suffering and hiding how they are feeling inside can be very detrimental and sometimes can lead to extreme cases such as suicide, which is another taboo topic in our society.

“It’s important to recognize symptoms of depression and other mental illnesses and get help before you do something that you can’t undo,” my dad said. “It’s even hard for me to talk about to this day. I think the medication and my doctor who understood what I was going through really helped me, and quite frankly saved my life.”

According to Pacific Standard magazine, the U.S. suicide rate is at its highest in a half-century: “A new survey on mortality and life expectancy in the United States, released by the Centers for Disease Control and Prevention (CDC), found that 47,000 Americans took their own lives in 2017 – 2,000 more than recorded in 2016. The national suicide rate has increased 33 percent between 1999 and 2017, according to the CDC's National Vital Statistics System data.”

What could this sharp increase in the suicide rate in the U.S. put to blame? One thing that many people today believe could have an effect is the increase in social media use and the body image issues and mental illnesses as well as cyber-bullying that come along with it.

Women in today’s day and age as well as men have this onset fear of telling people what they are suffering from inside their heads and how their mental illness is affecting them, so they keep all of their struggles and suffering to themselves causing them even more damage mentally as well as physically, such as with illnesses such as bulimia and anorexia which can be very detrimental to the body.

How can society put an end to this stigma or stereotype of people with mental illness and start helping people that are suffering rather than hurt them. It needs to become more of a normal topic and people need to become more comfortable speaking on it and about how to help those who are suffering. Whether it be implementing it more in schools at a young age or encouraging parents and health care providers to talk more to children about mental illness and that it is not a scary thing. Making it more normal to talk about gives people that are suffering more people to reach out to and quite possibly could aid in saving someone’s life.

Talking to a doctor and getting the help that my dad needed saved his life. Please if you are struggling in anyway reach out to someone, a doctor, a friend, a teacher, anyone that can point you in the right direction and on your path to recovery. Your life matters just like my dad’s did, even though he didn’t see it at the time. He found help and he is in a much happier place. My dad is still alive because he reached out for help and I am so thankful because I don’t know how I could survive without my best friend. 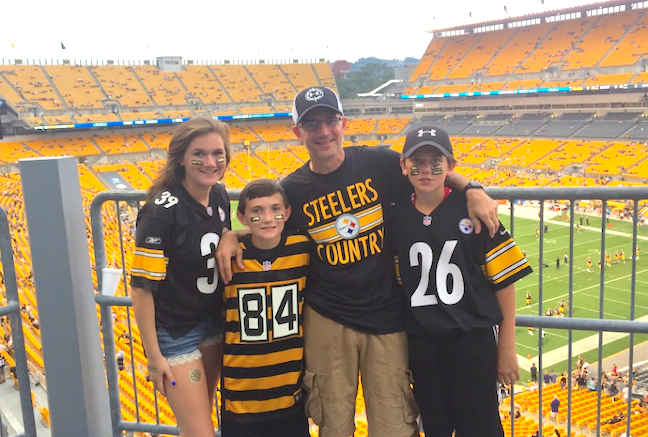 My dad and my brothers and I at a Steelers game a couple of years ago after he got help.

•••••
Niagara Frontier Publications works with the Niagara University Communication Studies Department to publish the capstone work of students in CMS 120A-B.
These articles do not necessarily reflect the opinions or beliefs of NFP, NU or the communication studies department.
Comments can be sent to the NFP editorial department, care of the managing editor.
Categories
NUsUnlimited
comments powered by Disqus