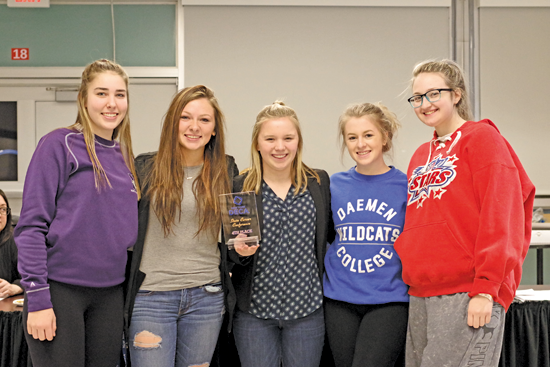 DECA students from Grand Island High School were honored at a Board of Education meeting in March after their success at the 59th DECA State Career Conference in Rochester. Eight students qualified for the national business education competition in Orlando, which takes place Sunday, Monday and Tuesday. Pictured from the BOE meeting are, from left: Bridget Neeson, Kaylee Butcher, Gabby Bergstrom, Melina Aceti and McKenna Prochaska. (Photo by Larry Austin)

Opening ceremonies are Saturday with students competing in business and marketing competitions Sunday and Monday. Students who qualify for finals compete Tuesday.

The group includes Bergstrom, the first-ever New York DECA president elected from Grand Island, and Hess and Merletti, who own Casey’s Cabana in Ferry Village. They earned a first-place win at the DECA state competition in March for their business plan.

“They are serious. The Cabana kids want it bad!” said Chamberlain, who herself was honored at the state conference with a lifetime achievement award.