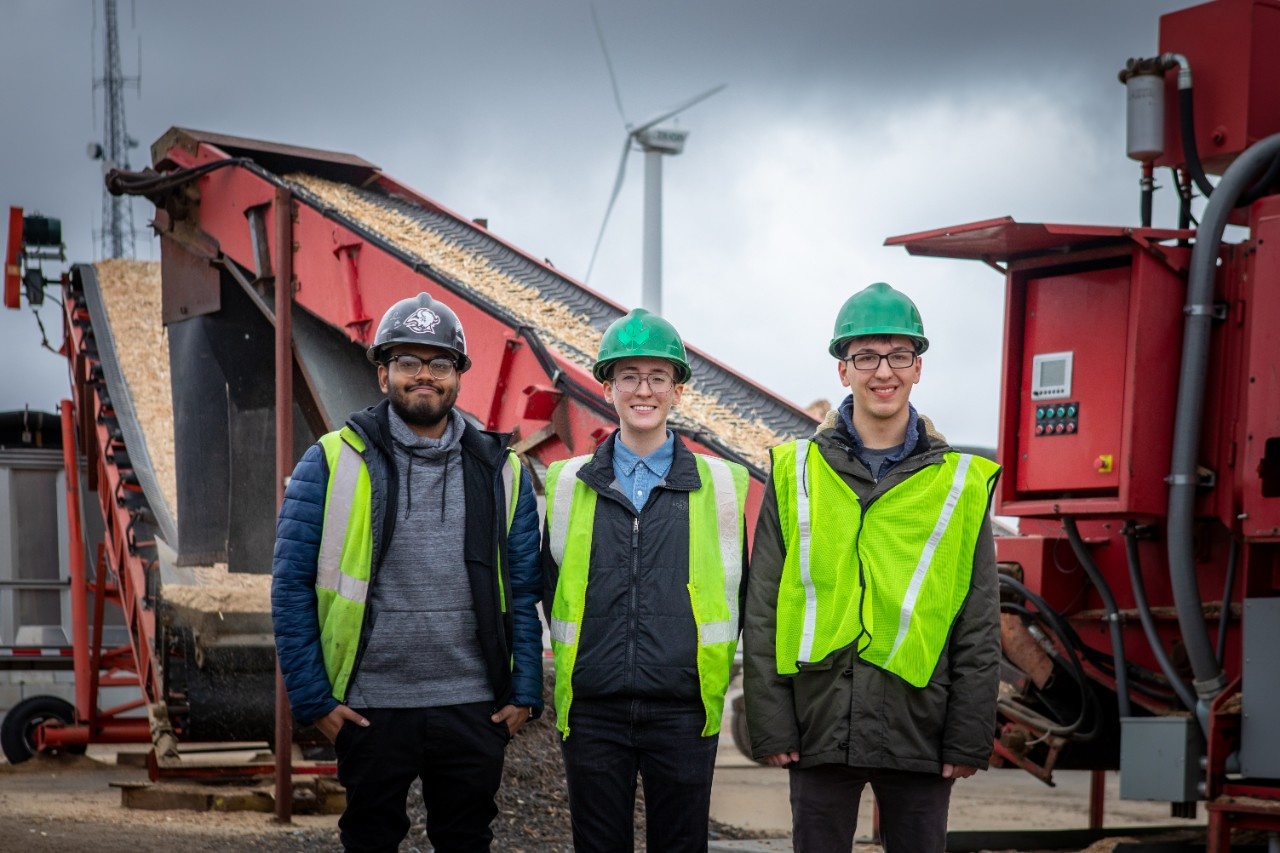 From left: Through a new UB class, UB students Dan Moses, Sean O'Neill and Todd Glosser are partnering with Triad Recycling and Energy to help the company reduce its carbon footprint. Credit: Douglas Levere/University at Buffalo.

In a new class, University at Buffalo students are confronting the challenge of climate change by working with local companies to cut their carbon footprints.

Proposed projects range from turning down the office thermostat to asking drivers to shut off idling trucks. And some partner companies are already taking action to implement some of the best, most viable ideas.

“I think it’s really awesome that the companies have jumped into this and are willing to collaborate with us,” said Elizabeth Thomas, Ph.D., assistant professor of geology in the UB College of Arts and Sciences. “I’m super-excited that we’re not only providing real, on-the-ground experiences for the students, but we’re also reducing Western New York’s carbon footprint, which is so important for every single community in the world right now.”

“The students are doing an awesome job,” she added. “They’re applying their scientific knowledge to a practical problem, and they gain important communication and negotiation skills that might not be explicitly taught in a science degree. And I think we all love the idea of actually impacting our carbon footprint.”

Thomas designed the class after hearing about a similar course taught at the Georgia Institute of Technology by faculty members Kim Cobb, Ph.D., and Beril Toktay, Ph.D.

At UB, Thomas co-teaches her class with Ryan McPherson, UB’s chief sustainability officer. Courses like these are key to the College of Arts and Sciences’ strategic initiative in Sustainable Urban Environments, which calls on students and faculty to engage with Buffalo as a living laboratory in an effort to create the sustainable city of the future.

“Elizabeth and Ryan have created a model class that directly connects our students with the community in meaningful ways,” said Robin G. Schulze, Ph.D., dean of the UB College of Arts and Sciences. “Courses that blend class work and project-based learning offer our students the opportunity to work on collaborative solutions to environmental challenges right here in Buffalo.”

Students work in small groups, partnering with a company to learn about its business. Then, the teams craft targeted proposals to reduce the carbon footprint of the corporate partner. (A carbon footprint refers to the estimated emissions of planet-warming greenhouse gases that are caused by a person or organization as a result of all of their activities, ranging from travel to consumption of food.)

Companies participating in the class this semester include several members of the Western New York Sustainable Business Roundtable, such as National Grid, Triad Recycling and Energy, Solar Liberty and the Tri-Main Center. The roundtable helped recruit the companies.

“I like that this class is about solutions,” said Chris Sbarra, a master’s student in geology. “We’re getting the opportunity to work with a real company – in our case, National Grid. It’s an amazing feeling to be able to put together a small team and approach a company the size of National Grid with recommendations, and to be taken seriously.”

“The projects we took on were really focused on helping the business cut down their carbon footprint while maintaining their productivity and even saving money in some cases,” said Lavkesh Rajwani, a master’s student in industrial engineering.

Sbarra and Rajwani made a number of proposals to National Grid, focusing on operations at the company’s Kensington Avenue facility in Buffalo.

The business has carried out some recommendations, such as making double-sided printing standard for employees in the building and lowering the temperature in many areas by 2 degrees on cold days to save energy. Older lights in garages and in a conference room have been swapped out in favor of more energy-efficient light-emitting diodes (LEDs) – changes that the students suggested, but that the company had already begun to implement independently in some locations prior to the class.

The projects align with existing sustainability initiatives at National Grid, which, in 2018, published its blueprint for drastically reducing greenhouse gas emissions 80 percent below 1990 levels by 2050. Called the “Northeast 80 x 50 Pathway,” it addresses the most carbon-intensive sectors throughout the company’s Northeast service area: heating, power generation and transportation.

“At the core of the ‘80 x 50 Pathway’ initiative is a focus on innovation, and it’s also the basis of high-energy, thoughtful discussions taking place in the new carbon reduction class,” said Dan Keating, engineering manager for National Grid’s technical sales and support team in New York, who has been working with Sbarra and Rajwani. “Many of the students’ ideas are in alignment with our carbon reduction goals and have been passed along to our facilities staff. From that standpoint, the new class has been a positive learning experience for National Grid.”

“The experiential learning piece of this is so great,” McPherson said. “The students have really learned a lot in just a few weeks, and it’s only a semester-long course, so they really need to come up with simple, practical ideas.

“That doesn’t mean you can’t be creative. UPS has a policy where their drivers never make a left-hand turn unless it’s absolutely necessary. They save a lot of fuel. This wasn’t a technological breakthrough – this was about thinking strategically about how you could reduce carbon and decrease waste. That’s what we’re asking the students to do.”

An Unforeseen Challenge: How to Make a Green Company Greener?

One corporate partner – Triad Recycling and Energy in the Town of Tonawanda – has posed a particular challenge for its student team: Triad is already so green that it’s been tough to find ways to reduce the business’ carbon footprint.

Triad specializes in recycling large, nonhazardous waste from construction, demolition and other business. For example, the company collects and grinds old roof tiles to convert them into materials for paving roads, and picks apart used mattresses to repurpose the wood, metal springs, foam and other parts.

“It’s a small company and they’re already doing a lot,” said Sean O’Neill, a senior studying geology. “They are very purpose-driven, and they have their own wind turbines that they use to make electricity, and they produce so much that they actually sell it back into the grid.”

O’Neill and his teammates, Todd Glosser, a junior studying geology, and Dan Moses, a senior environmental geosciences major, had to get creative. They proposed two ideas, both of which Triad is interested in pursuing.

First, the students suggested creating an incentive system to encourage truck drivers to turn off their diesel and natural gas engines while waiting in line at Triad to weigh their vehicles or dump their waste. Many drivers keep their trucks on out of habit – while modern diesel engines typically have little trouble starting in cold weather, that didn’t used to be the case.

“There’s this mentality with people who have diesel engines that you have to keep’em running,” explained John Hannon, co-founder and co-owner of Triad Recycling and Energy. “It comes from years ago when the engine technology wasn’t so good – at one point in history, it may have been a good idea to do it when the weather gets cold. But it’s no longer necessary.”

O’Neill, Glosser and Moses are also working with Triad to explore the idea of calculating the carbon savings that the business produces by generating a surplus of clean energy from two 100-kilowatt wind turbines. The surplus goes back into the grid, decreasing the need for energy from more polluting sources. Once carbon savings have been calculated, Triad can figure out how much of its own carbon footprint it may be offsetting through clean energy generation.

While this exercise won’t lower Triad’s actual emissions, it contributes to the company’s understanding of its carbon footprint and encourages investment in the green economy: “Being able to take credit for these offsets encourages companies to produce more renewable energy,” O’Neill said.

“I’m always interested and willing to learn,” Hannon said. “With this class, we thought we were bound to learn something and bound to improve our operations, with young people coming in and looking at our operations through new eyes. And it’s always fun to work with the students at UB and give them a fast-forward into the industrial world, where they might end up. I think it’s very useful for them and very helpful for us.”