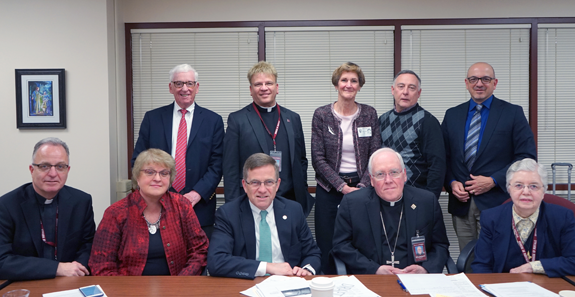 The Roman Catholic Diocese of Buffalo and the Movement to Restore Trust (MRT), an independent organization of Catholic laity formed to lead a movement to restore trust and confidence in the church in the wake of the clergy sex abuse scandal, jointly announce their ongoing partnership through the creation of a joint implementation team (JIT).

Buffalo Bishop the Most Rev. Richard J. Malone suggested the creation of the joint implementation team to foster collaboration in the coming months between the diocese and MRT to prioritize and implement the group’s recommendations for reform. The group held its first meeting on April 11, facilitated by a staff member of the Leadership Roundtable, and quickly reached agreement on the following initiatives:

A commitment by Malone to hold diocesan-wide listening sessions. The diocese is expected to announce the first two dates and locations by the end of April. The first session could be held as early as May. The bishop is committed to holding listening sessions throughout the diocese over the next several months as a means of hearing directly from Catholics about the sex abuse scandal and other matters concerning the diocese.

New initiatives in the handling of sex abuse cases. Several initiatives will be undertaken by the diocese:

•Malone will continue to meet with victims and also formalize a process for meeting with victims of sexual abuse by reserving regular hours on his schedule for individual meetings with victims.

•The diocese will work with MRT representatives to review the diocese’s approach to releasing the names of clergy who have been credibly accused of sexual abuse. The MRT has suggested a more detailed approach with information that is transparent and appropriately balances the rights and interests of all parties based on best practices gathered from other dioceses in the U.S.

•The diocese and MRT representatives will review the diocese’s intake processes for sex abuse claims to ensure victims of sex abuse are treated with dignity and respect and receive proper pastoral care.

•Malone will work to establish a new process for allegations of sexual abuse or misconduct that are made against a bishop of the Diocese of Buffalo. Malone intends to adopt a process modeled after other dioceses whereby complaints against a Buffalo bishop would automatically be referred to the Metropolitan Archdiocesan Review Board. This new process would remain in place until the Vatican or the U.S. Conference of Catholic Bishops (USCCB) develops a procedure applicable to all dioceses.

Expanding the diocesan finance council. Malone has committed to appoint a lay chair of the diocesan finance council (the current chair is the vicar general of the diocese, the Rev. Peter Karalus) and have laity (particularly women) comprise a majority of the members of the council. The expanded council will be charged with reviewing and improving the current model of financial transparency for the diocese consistent with best practices.

Expanding the use of the ethics reporting service. The diocese will expand the use of its ethics hotline, EthicsPoint, beyond reports of financial fraud or irregularity, to include all reports of any ethical improprieties, sexual abuse or harassment, or financial fraud.

“We are pleased with the progress made over the past month,” said John J. Hurley, president of Canisius College and one of the leaders of the MRT. “From the start, Bishop Malone has embraced the reform recommendations developed by approximately 150 Catholic lay people who have been working on MRT workgroups since early December. We are working in an active partnership with the diocese to bring hope and healing to the church in Buffalo. We fully recognize that these first steps are not complete solutions, but the process of restoring trust is underway.”

“The work of the JIT, bringing together representatives of the MRT and the Diocese of Buffalo, is an excellent example of the call for ‘co-responsibility’ in the church,” Malone said. “I am encouraged and energized by the work accomplished by the members of the JIT at their first meeting and pledge to continue to collaborate together. I accept and embrace their efforts to assist victim-survivors and our diocese to heal. The dedication and commitment that all the members have for the well-being of our diocese is inspiring and hope-filled in moving forward to restore trust.

“Over the decades since the Second Vatican Council, there have been challenges, especially in recent times, to realize the vision the council foresaw for the church. This is the time to fully embrace healing and also the true vision Vatican II hoped for the church.”

Members of the JIT include MRT representatives Maureen O. Hurley, Dr. Nancy H. Nielsen and Paul D. Bauer. Diocesan representatives are Karalus, the Rev. Monsignor David G. LiPuma, Sister Regina Murphy and Dennis Mahaney. Under the team’s charter, developed jointly by the diocese and MRT, the team is reporting to the bishop and Hurley on behalf of the MRT.